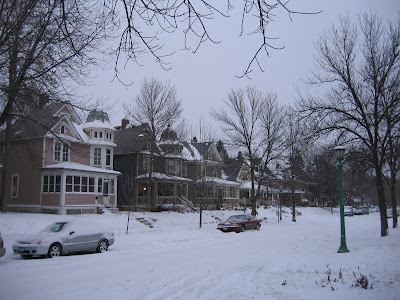 The image above shows my street this afternoon after a day and a half of intermittent snowfall. Yes, after a longer than usual period of fall weather, winter has arrived!

Following is how today’s Star Tribune reports on the recent wintry conditions here in Minnesota.

As the first major winter storm of the season roared eastward away from the Great Lakes, snow was diminishing today across Minnesota, only to give way to wind-whipped whiteouts and brutal windchills.

By noon, the snow had largely quit falling in Minnesota.

The National Weather Service described it, simply, as “an extremely dangerous winter storm.”

The storm left nearly a foot of snow could be on the ground in the southern metro area and as much as eight inches will cover the metro area’s northern reaches.

In Minneapolis and St. Paul, roughly in the middle of recorded snowfall depths, city officials declared the first snow emergencies of the season, to begin at 9 tonight. 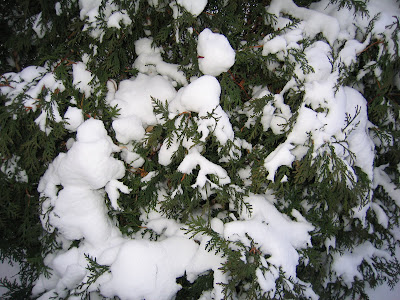 . . . Across the metro area this morning, the commute slowed to a crawl, with travel times double or triple the normal average. Congestion was widespread on most metro freeways.

By late morning, well after rush hour had ended, crashes and spinouts continued to plague motorists across the freeway system. With snowfall dwindling, the evening commute was expected to be less white-knuckled.

. . . With 24 mph winds from the north gusting to 40 mph and beyond, the afternoon temperature of 8 degrees will feel like 15 below zero, according to the weather service. . . In some parts of northern Minnesota, the high temperature is expected to remain below zero throughout the day, with wind chills of minus 30 degrees.

The cold will continue through the week, with highs in the single digits through Thursday.

And Minnesota is hardly alone. The storm hammered more than a dozen states Tuesday with dangerous ice, heavy snow and vicious winds creating drifts up to 15 feet high in parts of the Upper Midwest. 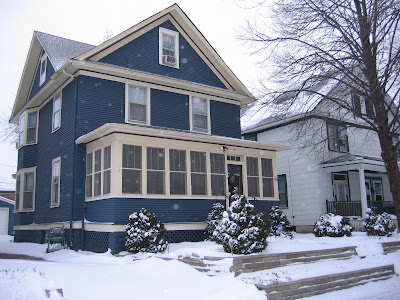 Above: My home in St. Paul. I took this photo shortly before I started shoveling snow from the sidewalk and the paths and steps around the house. 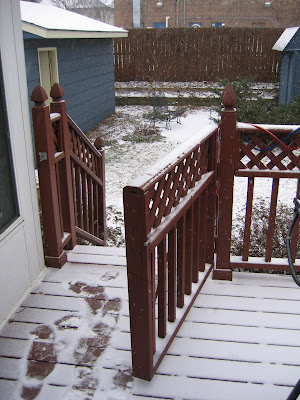 Above: A photo I took yesterday, just as the snow was beginning to fall. 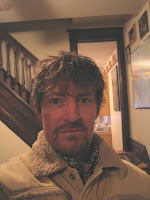 It’s strange to think that in less than a week I’ll be experiencing summer in Australia! Yes, on Sunday evening I leave the Twin Cities for a two month-long visit to my homeland. I’m very much looking forward to sending time with my family and friends - my parents in particular.

I’ll continue blogging, of course, though perhaps not as regularly. I certainly look forward to sharing images of the beautiful and unique Australian landscape - especially the coastal landscape around Port Macquarie, New South Wales, where my parents and my younger brother and his family live. I also look forward to visiting my hometown of Gunnedah at some point during my time in the Great South Land.

Thanks for sharing the picture of your home, Michael. It is beautiful. It looks like it could be from the town that I was born in. Hope you are staying warm. We had a very mild November but now we are paying for it. We are snow covered now. It won't be long now and you will be toasty warm. Hope all is going well and you are not too stressed getting ready for your big trip.