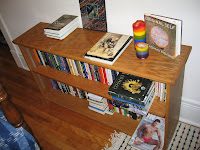 I recently bought a bookcase from a second-hand store just around the corner from where I live. I have a lot of books – probably too many books - and for quite some time now many of them have been stacked in piles all around the house. So it felt good to finally gather them all together in this new bookcase.

Another benefit was that in the process of bringing these books together I discovered a number of titles that I had completely forgotten about. One such title was Robert Jensen’s Getting Off: Pornography and the End of Masculinity. It’s a powerful and insightful book, and I’d like to share an excerpt from it in two installments here at The Wild Reed.

When I have talked about the quest to transcend that weary drama, people have often asked me what kind of sex acts I imagine will connect us to our erotic power. I always hesitate to respond, not simply because I’m unqualified to offer a sexual recipe book to people, but because I think it is the wrong question. It’s not a question of specific acts as much as it is a question of how we relate to each other. Toward the deepening of our understanding of self, other, and sex, I found two other distinctions helpful: magic vs. mystery, and heat vs. light.

People often talk about sex as being magical, imbued with a capacity to take partners to some higher state of consciousness. A more formal sense of “sex magic” in various traditions attempts to turn sex into a spiritual ritual of sorts, though most people use the term “magic” or “magical” to describe something short of a sacred rite.

I find “magic” to be an unfortunate term to use in connection with sex, because it implies the act can be understood. Though “magic” is used to describe things that most people don’t understand, magic is a process that can at least potentially be understood. When magicians perform magic tricks, we may not at first understand how they were done, but we know that the magicians understand and that we could, with enough study, figure it out for ourselves. Magic depends on misdirection, on the performer training our attention away from the secret of the trick.

I don’t think of sex as magic, as something one can ever really learn. Rather than conceptualizing sex as tricks that can be analyzed, sex is more mystery, something beyond our capacity to understand. When we feel truly connected to another person and express that sexually – when we truly touch another person – it isn’t really magic; it’s not something we can fully grasp. It is mystery, and it is that mystery – or the hope we can connect to that mystery – that keeps us alive sexually. Without it, our sexual lives tend to fall into routine. Though magic can be entertaining, even it can become routine.


NEXT: Heat vs. Light


Recommended Off-site Link:
A Review of Robert Jensen’s Getting Off: Pornography and the End of Masculinity - Terry Ornelas (Austin Chronicle, December 7, 2007).

See also the previous Wild Reed posts:
Relationship: The Crucial Factor in Sexual Morality
Making Love, Giving Life
The Non-Negotiables of Human Sex
Human Sex: Weird and Silly, Messy and Sublime
A Wise and Thoughtful Study of Sexual Ethics
What Is It That Ails You?

Thank you for all you do. You are a gifted writer and an exceptional thinker. Your comments, and art, on spirituality and sexuality are powerful and lift up my spirit. Dios te bendiga!