MN Legislators Hear from Supporters and Opponents of Marriage Equality 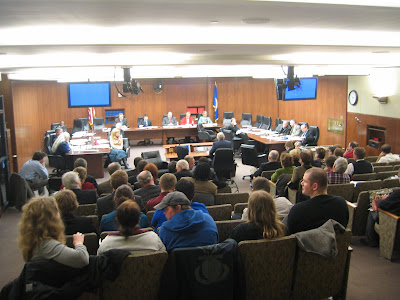 I intend sharing in the next day or so my thoughts on last night’s Minnesota House of Representative hearing on marriage equality. For now, here’s James Sanna’s report on the hearing, along with a few photos I took at it.

Passionate testimony in favor of marriage equality filled Monday night’s hearing on three marriage equality bills currently before the Minnesota House of Representatives’ Civil Justice Committee. But the event hailed as “historic” by OutFront was a bitter disappointment for activist Doug Benson, founder of Marry Me Minnesota and, along with his partner Duane Gajewski, one of the plaintiffs in a lawsuit seeing to overturn the 1997 law banning same-gender marriage in Minnesota. 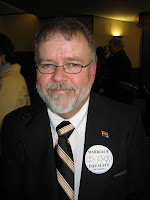 “This hearing should have happened last year,” Benson [pictured at right] told TheColu.mn after the hearing adjourned. Benson said he believes a marriage equality bill had enough support in the Civil Justice Committee last year to pass one bill out of committee and refer it to the full House for a vote. With a change in committee membership, however, Benson said it was uncertain if a vote Monday would have succeeded.

“What would a vote have gotten us this year? Nothing,” said Rep. Phylis Kahn, pointing out that Governor Tim Pawlenty would undoubtedly veto any and all marriage equality bills that pass his desk.

Monica Meyer, OutFront Minnesota’s Policy Director confirmed before the hearing that pro-equality forces would not have enough votes to override any potential veto.

“It’s too bad we can’t get marriage this year,” witness Randi Reitan told TheColu.mn. “But any time you hold a hearing, you’re touching someone [in the state legislature].”

Benson wasn’t buying her sentiments, though.

Every time a marriage equality bill has a hearing, he said, “We’ll get dragged through dirt by the freaks on the opposite side. How many times do we have to go through this?”


“The average homosexual has hundreds of sexual partners”

And of “freaks,” there were plenty. For every loving family, legal expert, or equality advocate who spoke Monday night, a conservative religious leader, “therapist”, or legal expert offered a rejoinder.

“The average homosexual has hundreds of sexual partners,” railed Barb Davis White as the packed crowd of equality supporters chuckled. White is a Republican candidate for Rep. Keith Ellison’s seat in the US House of Representatives.

Others, including University of St. Thomas law professor Teresa Collett, ex-gay therapist Willard Harley, and a representative of Minnesota’s Catholic bishops, offered up a bounty of claims for fact checkers to test.

In Massachusetts and other states that have legalized same-gender marriage, Collette charged, “there are public officials who deny public funds…to groups that do not share their belief in the moral equivalency” of heterosexual and homosexual marriage.

Harley and Becker ended up dueling for “Most Ridiculous Statement” of the night. Becker snuck his way around Church dogma mandating opposition to all forms of oppression by claiming the denial of marriage rights was not oppressive at all. However, Harley claimed that recognizing same-gender marriages would turn school children gay, since programs teaching diversity “create neural pathways” that will cause a student to assume homosexual attraction is the norm.


“Families across America are changing” 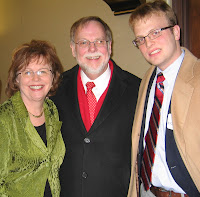 Many witnesses who spoke in favor of equality testified to the positive aspects of marriage equality – its conformity with “conservative” values, its potential economic benefits for the state, the need to adapt laws to the changing nature of families – but perhaps the most powerful testimony of the evening came from Jacob Reitan and his parents, Randi and Philip [pictured above]. After his mother recounted how the family was terrorized following his coming out in Mankato, Jacob Reitan reminded legislators of the price of inaction.

“It is the price of pain felt by gay and lesbian people at hearing the forces of intolerance time and again demean their lives and love,” Reitan said. “It is the price of insecurity and financial hardship gay and lesbian couples face when denied the 515 rights that are attendant with marriage in the state of Minnesota. Finally, it is the quiet yet ever-present price of inferiority gay people feel with the knowledge that in the eyes of the government, they are second-class citizens.”

See also the previous Wild Reed posts:
Have Message, Will Be at Capitol
A Catholic Voice for Marriage Equality at the State Capitol
America’s New Civil Rights Battle
The Same People

If these people are so worried about gay people having too many sex partners then why wouldn't they want gay people to be allowed to get married and commit to only one person? It upsets me that some in the Church are getting out the long knives to use against gay people. This isn't the Church that I was raised in. I am troubled by how some Church leaders are trying to stir up hostility against gay people.

I agree with you 100%, Mark. Thanks, as always, for your thoughtful comments.