Kristen McQueary: "Yes to Civil Unions and Yes to My Catholic Faith" 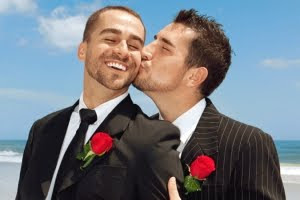 Following are excerpts from an op-ed by Kristen McQueary published in the Springfield, IL Southtown Star. As you may know, Illinois' House of Representatives recently passed legislation legalizing civil unions for same-sex couples. The bill now heads to the State Senate, where it is also expected to win passage -- despite strong opposition from the local clerical caste of the Roman Catholic Church.

McQueary's op-ed is entitled "Yes to Civil Union and Yes to My Catholic Faith," and clearly shows that not all Catholics agree with the clerical caste's stance on homosexuality and the legalization of same-sex unions.

Let's talk about sex, shall we? Because that's really what last week's civil union vote in Springfield was all about.

For years, I've struggled with my own church's recoil toward homosexual behavior. I am Catholic.

My confusion is twofold: If you believe homosexuals are born gay, as I do, then you believe God created them that way. Under no circumstance should they - as made-to-order miracles of God - be expected to refrain from the natural urges that guide their relationships.

Sexuality is inherent. It's chemical. So between consenting, loving adults, sexual activity should be viewed as a natural progression of a relationship, no matter the body parts involved.

I'm also confused about the Catholic church's aggressive lobbying against civil unions and abortion while devoting far fewer resources to a host of issues in Springfield that counter Catholic teaching.

Frankly, I don't get that either. Whether gay people unite in a civil union impacts my heterosexual marriage zero percent.

Apparently, the church still hopes to convert gay people to heterosexuality. Marriage is an incentive to that. So removing that incentive and allowing "marriage" between gay people means fewer homosexuals will choose heterosexual unions.

But come on. Does that make sense?

It doesn't to me. Gay people are gay, right down to their genetic core. Nudging them into heterosexual relationships is wrong and will, most of the time, end in painful divorce.

"It was not an easy vote. I really struggled with it. But one comment that stuck with me was from a person in the church I really respect, and that was, 'Any loving relationship is a blessed relationship,' " Maloney said.

"If you read the bill, it is not an attack on marriage," added state Sen. Maggie Crotty (D-Oak Forest), also a Catholic. "When we wake up, married couples have nothing to fear. This was not a religious issue. It really deals with the rights of persons who want to enter into a partnership."

The church also believes man plus woman equals children. Procreation is the bedrock of the Catholic faith.

But God doesn't always allow men and women to procreate the old-fashioned way. Millions of heterosexual married couples choose not to have children or physically cannot. If they rely too heavily on science to treat infertility, the church blasts them, too.

Lastly, you should know I am a proud Catholic. I am Catholic because I respect, follow and support the church's missionary devotions and its humble, service-based teachings.

But because of my liberal views on gay marriage, the church would prefer to cleanse me of its pews. I am not "pure."

I'm not leaving. I was baptized, confirmed and married into the faith, and I'm staying put.

Right where God calls me to be.

To read Kristen McQueary's op-ed, "Yes to Civil Unions and Yes to My Catholic Faith," in its entirety, click here.


See also the previous Wild Reed posts:
A Catholic Statement of Support for Same-Sex Marriage
At UST, a Rousing and Very Catholic Show of Support for Marriage Equality
A Message to NOM (and the Catholic Hierarchy)
Knowing What To Do, Knowing Why To Stay
Staying On Board
One Gay Catholic Parent Who Isn't Leaving the Church
Choosing to Stay
A Christian Case for Same-Sex Marriage
Steve Chapman: "Time is On the Side of Gay Marriage"