Dirk Bogarde's "War Against Himself" 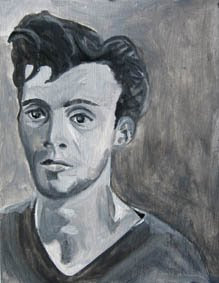 This week in Britain sees the release of a box-set of Dirk Bogarde films. If he was still alive, the actor would turn 90 today.

In a fascinating article last week in The Guardian entitled "Dirk Bogarde: The Rebellion of a Reluctant Pinup," Matthew Sweet discusses with great insight Bogarde's career trajectory and muses on why the actor "never became the pre-eminent face of the British new wave."

"Perhaps he was just too old," writes Sweet. "Or perhaps he boiled with the wrong kind of anger. The fury he committed to the screen was rarely the righteous kind. It is usually a product of something deeply felt but morally murky. . . . A line like 'Don't let the bastards grind you down' would not have spilled easily from his mouth. And this is one of the reasons why his work remains compelling. Even when he was playing the hero, Bogarde was usually one of the bastards." 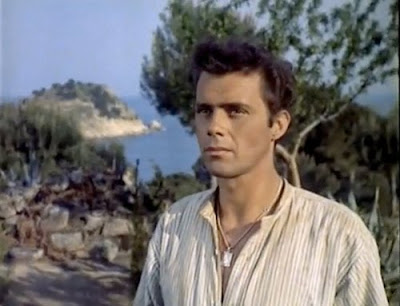 The gifted yet troubled Dirk Bogarde was the subject of one of my first series of posts here at The Wild Reed. It was a series prompted by my 2006 reading of John Coldstream's Dirk Bogarde: The Authorised Biography. The actor was also the subject of a subsequent post, Revisiting Dirk Bogarde.

I mention all of this as way of introducing the following excerpt from Matthew Sweet's article on Bogarde.

. . . Bogarde died in the last year of the last century. He would have been 90 years old on Monday. For the last two decades of his life, however, cinema commanded very little of his attention. Instead, he became a prolific producer of witty but not particularly reliable memoirs – bestsellers in which he romanticised his childhood in a verdant swathe of the Thames Valley, gave a dubious account of his wartime experiences and poured gentle scorn on his former life as a matinee idol. 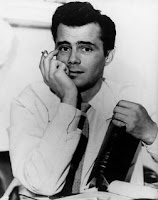 His film career, however, is in no danger of slipping from our cultural memory. That pretty-boy psychopath who guns down PC Jack Warner in The Blue Lamp; the sleekly charming Simon Sparrow in all those Doctor comedies [left]; his angsty Sydney Carton, soulful before the guillotine in A Tale of Two Cities; the sweatily menacing butler in The Servant, crushing James Fox into submission; the mournful sadist who lays hands on Charlotte Rampling in The Night Porter. They live on. Not just as individual performances, but as evidence of a remarkable – and often troubled – life in the movies. 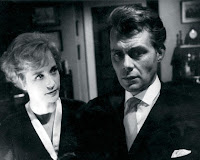 The story of Dirk Bogarde's war against himself is one of the great narratives of British cinema. It's the tale of a gifted young actor who became trapped in the smooth screen persona prescribed for him by his employers, and how he broke from it by embracing controversy, art and Europe. The killer blow came in 1960 when he joined the cast of a campaigning picture called Victim [right]. ("I wanted him! I wanted him!" Bogarde declares, in the film's best-remembered scene, as his lawyer hero confesses his desire for a teenage runaway called Boy Barrett.) And when the credits rolled, so the story goes, all the girls who had swooned over him in the Doctor pictures and fantasised about being taken out by him for a drink at a Home Counties golf club, quietly took down their Dr Sparrow posters and redirected their desires towards Cliff Richard. It's an engaging story. And it's almost true. . . .


To read Matthew Sweet's "Dirk Bogarde: The Rebellion of a Reluctant Pinup" in its entirety, click here.