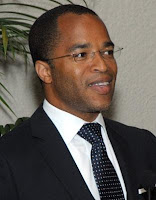 Recently on his Washington Post blog Jonathan Capehart (left) reflected on the "historic" findings of the most recent Washington Post-ABC News poll on same-sex marriage.

Why "historic"? Well, for the first time in the poll's history, more Americans support same-sex civil marriage than oppose it. But the actual focus of Capehart's op-ed is the "astounding" jump from last year's 55% to this year's 63% of white Catholics who support same-sex civil marriage. (Of course, it's not just "white Catholics" showing support for marriage equality but also Latino Catholics, as Joseph Palacios documents

The findings of the Washington Post-ABC News poll, combined with similar data from other polls, compels Capehart to declare that Catholics lead the charge on acceptance of same-sex marriage. As a gay Catholic working for church reform I find both affirmation and hope in this.

I was also happy to see Phil Attey, executive director of Catholics for Equality, quoted in Capehart's op-ed. Phil was very helpful and supportive in the establishment of Catholics for Marriage Equality MN – an initiative that I and others undertook last October in response to the Minnesota Catholic Conference of Bishops' ongoing efforts to ban same-sex civil marriage.

As the results of poll after poll clearly demonstrate, the Catholic people do not agree with the clerical caste's stance on homosexuality and marriage equality. Members of this caste often declare themselves the teachers of the church. Perhaps as Catholics we need to remind them of our church's tradition of sensus fidelium (the "sense of the faithful") and of the reality that before one can be a good teacher, one must be a good listener.

Following is Jonathan Capehart's op-ed in its entirety.

The Washington Post-ABC News poll shows that same-sex marriage is supported by 53 percent of those surveyed. That's amazing. For the first time in the poll's history, the level of support for marriage equality cracked 50 percent. For the first time, a majority of men (53 percent) say yes to allowing gays to wed. But what's truly historic is where white Catholics are on this issue.

The question was straightforward: “Do you think it should be illegal or legal for gay and lesbian couples to get married?” In February 2010, an astounding 55 percent of white Catholics said "legal." In the current poll, the number jumped 8 points to 63 percent. This Post-ABC News poll corresponds with a Gallup poll I gasped at in June 2010. That survey showed that Catholics (62 percent) and men (53 percent) were leading the charge on acceptance of same-sex marriage, which was supported by 52 percent of all surveyed.

This doesn't come as a surprise to Phil Attey, executive director of Catholics for Equality, who alerted me to this interesting nugget in the Post-ABC News polling data. "American Catholics consistently poll higher on progressive social justice issues — including the freedom to marry for all," he said. "Our Catholic faith tradition is strongly based on social justice and our duty to take care of those who are unjustly oppressed and marginalized." He went on to say, "Our families have already dealt with this issue at a personal level, and Catholics largely base their moral understanding of the world through their personal relationships, not by the dictates of institutional forces, be they from our church hierarchy in Rome or conservative political groups. We see healthy, happy gay and lesbian families within our families, parishes and communities, and we know love and commitment when we see it."

May these latest poll results help the nascent and long-term effort in Congress to repeal the so-called Defense of Marriage Act. It won't happen overnight, and it won't be easy. But with more and more Americans siding with equality, there should be no fear of doing what is right.

See also the previous Wild Reed posts:
A Catholic Statement of Support for Same-Sex Marriage
At UST, a Rousing and Very Catholic Show of Support for Marriage Equality
A Hopeful and Encouraging Trend
"If the People Don't Believe It, It's Not True"
Sensus Fidelium Discussion Continues
Quote of the Day – September 14, 2010
A Catholic Understanding of Faithful Dissent (Part 1)
A Catholic Understanding of Faithful Dissent (Part 2)
The Catholic Challenge
Will We See Change?
The Treasure and the Dross