Catholic Attitudes on Gay and Lesbian Issues: An Overview 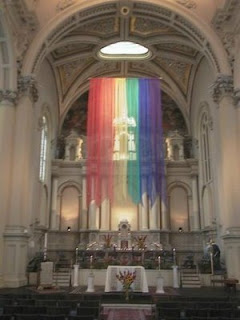 Following are highlights from the March 2011 Public Religion Research Center (PRRC) report that offers a "comprehensive portrait from recent research" of Catholic attitudes on gay and lesbian issues. One of these issue is civil marriage rights for gay and lesbian couples.

(NOTE: The full report can be read

here. The methodology supplement to the report can be read here.)

Here in Minnesota, a number of Roman Catholic bishops have been very vocal in their support of a "marriage amendment" to the Minnesota Constitution that would deny civil marriage rights to same-sex couples. The findings of PRRC lay to rest the claims of these bishops that they "speak for the Church" on the issue of civil marriage rights for gay and lesbian people. They do not.

At most, what can be said is that the bishops speak for themselves as members of the Church's clerical caste, the "hierarchy," one of three of the Church's sources (or magisteria) of truth.

The other two sources, namely the insights of theologians and the experiences of the entire people of God – known as the sensus fidelium, or, the sense of the faithful, have largely rejected the hierarchy's limited way of thinking and speaking anthropologically and theologically on many issues relating to human sexuality – including homosexuality and marriage for same-sex couples. The following findings clearly reflect this rejection.

* Compared to the general church-going public, Catholics are significantly less likely to hear about the issue of homosexuality from their clergy, but those who do are much more likely to hear negative messages. Only about 1-in-4 (27%) Catholics who attend church services regularly say their clergy speak about the issue of homosexuality, but nearly two-thirds (63%) of this group say the messages they hear are negative.

* Seven-in-ten Catholics say that messages from America’s places of worship contribute a lot (33%) or a little (37%) to higher rates of suicide among gay and lesbian youth.

* A majority of Catholics (56%) believe that sexual relations between two adults of the same gender is not a sin. Among the general population, less than half (46%) believe it is not a sin (PRRI, Religion & Politics Tracking Survey, October 2010).

See also the previous Wild Reed posts:
A Catholic Statement of Support for Same-Sex Marriage
Jonathan Capeheart: Catholics Lead the Way on Same-Sex Marriage
Responding to Bishop Tobin's Remarks on Gay Marriage
A Message for NOM and the Catholic Hierarchy

The source of truth surely is God's Revelation, as found in Tradition and Scripture. I would have thought the personal opinions of bishops are not in and of themselves a source of truth.