A Hopeful (and Humorous) Look to the Future 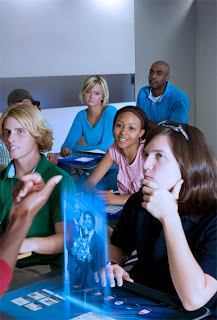 I have to say that after Saturday night's
disappointing Minnesota House vote on the marriage amendment, the following piece from The Onion is just what I need!

I hope it gives you a chuckle, too – along with a reminder that, despite the current setbacks, the tide of change around marriage equality can't and won't be stopped: We will one day see marriage equality for all – regardless of sexual orientation. Of this I'm sure.

(Thanks to my friend Mark for sharing this article on Facebook!)

DECATUR, IL, THE YEAR 2083 — According to students in Mr. Bernard's fourth-period U.S. history class, it's "really pathetic" how long it took for early-21st-century Americans to finally legalize gay marriage.

The classroom of 15-year-olds at MacArthur High School — all of whom were born in the late 2060s and grew up never questioning the obvious fact that homosexual couples deserve the right to get married — were reportedly "amazed" to learn in their Modern U.S. History: 2081 Edition textbooks that as late as the 2020s, gays and lesbians actually had to fight for the constitutional right to wed.

"Wow, that is nuts," said student Jeremy Golliver, who claimed he knew gay rights was a struggle "like, a hundred years ago" but didn't realize it lasted so long. "It's really embarrassing, when you think about it. Just the fact that people in this century were actually saying things like, 'No, gays should not be allowed to marry,' and were getting all up in arms about it, as if homosexuals weren't full citizens or something. It's insane."

"I mean, was everybody just a huge bigot back then or what?" Golliver added.

The late-21st-century high schoolers told reporters that while many of them had seen depictions of the struggle for gay rights in "old movies" such as Milk, it was "bizarre" to read about how, just 70 or so years ago in the 2010s, many Americans truly thought that gay marriage would somehow destroy the fabric of the country.

"There were apparently these really important senators named John McCain and John Kerry who said that marriage should only be between a man and a woman," said a visually baffled Kevin Wu-Picarsic, adding that he couldn't imagine people like that actually being in charge of the country. "I guess in the end I feel really bad for gay people back then who loved each other and wanted to get married. What a sucky time to live."

After breaking into study groups to examine chapter 21 of their textbooks — covering the period from the financial collapse of 2019 to the end of the war in Afghanistan — Mr. Bernard's students spent much of the class period discussing, in disbelief, how even supposedly liberal U.S. presidents of the era were "too afraid, apparently" to publicly endorse gay marriage.

"If they thought it was the right thing to do, why didn't President Clinton or Obama or whoever just say, 'Hey, discriminating against gay people is wrong, so let's let them get married'?" said Pete Merriam, 15, who was born in an age with no death penalty and with nationwide approval of a woman's right to choose. "I get that they wanted to be reelected or whatever, but come on. That is so stupid."

"And look, our textbooks say civil rights legislation was passed in the 1960s, but then it somehow took another three generations to legalize gay marriage?" added classmate Jennifer Goldberg, laughing. "How does that even make sense? Oh my God, and those civil union things were ridiculous, too. Just let gay people get married already!"

Upon learning that gay marriage actually had to go to the Supreme Court, where it barely passed in a controversial 5-to-4 decision, students from the class of 2086 speculated that "maybe people were just dumber [in the early 2000s]," at which point student Eminem Robertson began to loudly impersonate a bumbling Supreme Court justice from the turn of the century, eliciting loud laughs of approval from classmates.

Mr. Bernard, 58, told the class that he himself could remember how in the 2030s gay marriage was still a somewhat touchy subject in certain parts of the country.

"It's true," said Mr. Bernard, gesturing to a holographic projection of late-20th/early-21st-century antigay preacher Fred Phelps on the classroom's V-screen. "Most people had come around by the time I was your age, of course, but you would still read and hear things about how certain people in New Washington were trying to overturn the court's ruling. Hard to imagine anyone being that adamant about gays not marrying, but those were different times."

"In fact, I remember President Romney even gave this speech once calling gay marriage 'an issue that continues to divide many in our nation, including myself,'" Mr. Bernard continued. "Of course, that was before his openly gay son, Craig, served four terms as president a couple decades later."

While the future students, roughly one in eight of whom were raised by gay or lesbian parents, are scheduled to write essays debating the different viewpoints on gay marriage in the 2010s, a number of them told reporters it was hard to conceive of arguments against something as clearly justified as gay marriage "as though it were some big controversial issue, like marrying your clone."

After concluding the week's examination of the history of gay marriage rights, classroom sources in the year 2083 said they would be moving on to the topic of how their grandparents' generation was too late to do anything about global warming.

For more laughs at The Wild Reed, see:
A Moment of Levity
Boardies, Budgie Smugglers and Euro-Togs
No, Really . . .
When It Comes to the Anti-Muslim Sentiment of Some Americans, The Onion Nails It!
You Don't Say!
Oh! What's This, Then?
Quote of the Day – July 11, 2010
LaBottomy
Now Here's a Canny Idea . . .
This is Too Funny
Why Gay Marriage is Wrong
"Render Unto Caesar, Bitches!"
Let's Hear a Big "Woo" for The Saturday Show
"A Simple Matter of Logic, Really"
A Car Ad with a Difference
Oops!
One Out of Ten
Did Ya Hear About Our John?
A Humorous Look at Internalized Homophobia

"as though it were some big controversial issue, like marrying your clone." - Science fiction writers have been dealing with issues like this for quite a while now. William Gibson's "Neuromancer" comes first to mind.