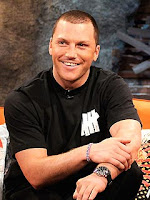 Hey, looks like I'm starting a new series here at The Wild Reed!

Last month I highlighted English rugby star Ben Cohen's anti-homophobia efforts. Today I spotlight U.S. hockey player Sean Avery's advocacy for same-sex marriage, a support that makes him the first professional athlete to join the video campaign "New Yorkers for Marriage Equality." I think the application of "What a Man!" to both of these guys is appropriate, don't you?

And from now on I'll be on the lookout for other stories of well-known straight men who, regardless of the risks to their careers or popularity, take a stand for LGBT people and their civil rights. And together these posts will comprise The Wild Reed's "What a Man!" series!

That New York Rangers winger Sean Avery [left] is an advocate for gay rights isn't news. When asked earlier this year about a gay player coming out in the NHL, Avery said "I'll stand beside him in the dressing room while he tells his teammates he is gay. Maybe if Sean Avery is there, they would have less of a problem with it."

That New York Rangers winger Sean Avery has politicized that advocacy is news. Because no matter how outspoken a professional hockey player is, they rarely give voice to an issue in a formal campaign.

Yet here's Avery, in an endorsement ad for Human Rights Campaign's "New Yorkers for Marriage Equality Campaign" that was released this week. And hockey's better for it. 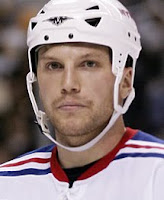 According to HRC strategist Brian Ellner, Avery is the first professional athlete in New York to "publicly support marriage equality."

His decision has become national news in the gay community. On his decision to join the campaign, the New York Times reports:

"The places I've played and lived the longest have been in West Hollywood, Calif., when I played for the L.A. Kings, and when I moved to New York, I lived in Chelsea for the first four years," Avery said in a phone interview. "I certainly have been surrounded by the gay community. And living in New York and when you live in L.A., you certainly have a lot of gay friends."

Avery, who lives in the SoHo section of Manhattan and keeps a home in Los Angeles, said some of those friends had wanted to marry, and he saw no reason they should not.

"I'm certainly open to it," he said. "Maybe I can help, and I jumped at this opportunity."

Now, Avery is one of the most divisive players in the NHL because of his antics, and frequently called on its most hated players. Rangers blog Blue Line Station worries that Avery's endorsement will somehow be used against him by critics: "You can bank on other fans trying to find a way to make this an example of him being 'classless.'" But that's a stretch. 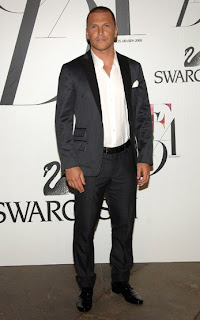 First off, his is not the dissenting opinion nationally. The latest polls show a majority of Americans in favor of same-sex marriage, and that momentum has been building for the last year. It's also a winning issue in New York: HRC cites a Siena Research Institute poll finding 58-percent support for same-sex marriage, and Gov. Andrew Cuomo expects a bill that legalizes it to pass.

Secondly, it's inspiring to see an NHL player have an actual on-the-record opinion on something beyond frivolity. Hate the player, hate his politics … how many fans are going to sit there and condemn Avery for doing this? For speaking out? Isn't it nice to know at least some of these guys give a damn about something?

Granted, this is good business for Avery, too. They're his politics, but they're also part of his brand: Fashion, restaurants, whatever sort of commentary he enters into after his playing days. To say something off the cuff is different than a calculated effort to endorse a movement, at least for someone as well-known as Avery.

Obviously, you can't mention a hockey player and homosexual rights without evoking Brendan Burke and what his legacy inspired. The levels of compassion and understanding that followed his coming out, and the actions of his father Brian Burke after Brendan's death, laid a foundation for players like Avery to not seem entirely out of step with hockey's current social norms. 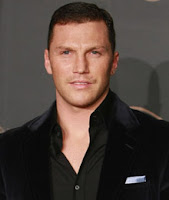 You also can't mention Sean Avery in support of gays without recalling the problems the New York Rangers have had with that community in years past, with gay fans claiming MSG was a cesspool of homophobia. Having Avery, in his Rangers sweater, in these ads can only be a good thing image-wise and for building stronger bonds with that community.

Avery doesn't speak for hockey, but he speaks as a hockey player, and that's important. 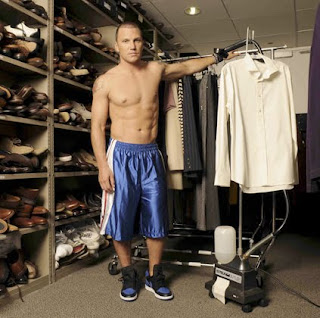 See also the previous Wild Reed posts:
• What a Man! – Ben Cohen
• A Fresh Take on Masculinity
• Learning from the East
• Jesus Was a Sissy
• The Trouble with the Male Dancer (Part 2)

Labels: Marriage Equality, What a Man