At the MN Capitol, Protests Against the Proposed Marriage Amendment Continue 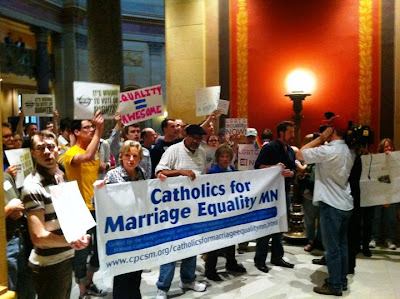 That's me above at right, holding the Catholics for Marriage Equality MN banner and being interviewed by Fox 9 News earlier today at the Minnesota State Capitol.

Holding the other end of the banner is my friend Mary Lynn Murphy, co-founder with her husband, Mike, and a number of other Catholic couples, of Catholic Rainbow Parents. The man in the middle is named Whitney. He introduced himself to us as "one of the few African-American Catholics in Minnesota"!

This photo was taken just after representatives of the Minnesota House – the majority of them Republican – filed past us as they returned to the House chamber from a recess. It seems likely that the House will vote later today on the controversial marriage amendment that bans civil marriage rights for same-sex couples. Unfortunately, it seems likely to pass, given that Republicans control the House.

The Star Tribune article below describes well the mood earlier today at the Minnesota State Capitol.

The Star Tribune
May 21, 2011
As Republican legislators moved single-file into the Minnesota House just before noon, hundreds of protesters Saturday lined the hallway on both sides and loudly chanted “Just Vote No!” against the gay marriage ban amendment.

State troopers lined the hallway, making sure the legislators had enough room to move through. There was no indication Saturday that the House would vote on the proposed constitutional amendment to ban gay marriage.

At one point, Taina Maki of Minneapolis stuck out her hand and House Speaker Kurt Zellers paused briefly to shake it amid the deafening noise. “I just wanted him to look me in the eye, and acknowledge me as a human being,” said Maki, who held up a rainbow-colored map of the state of Minnesota.

Zellers then touched the elbow of a state trooper and told him “thank you,” as the crowd seemed to get louder.

The loudest cheers meanwhile came for Rep. John Kriesel, R-Cottage Grove, who has said he will break with his Republican House colleagues on the issue and vote against the proposed amendment. Kriesel, walking with a cane slowly through the crowd, nodded to them without smiling.

“I’m upset at what’s happening in our state,” said Judy Finger of Apple Valley, who watched the Republican legislators file by. “I expect it will pass. I hope not, but I think it will.”

The crowd meanwhile chanted “Hey-Hey-Ho-Ho, Bigotry Has Got To Go.” 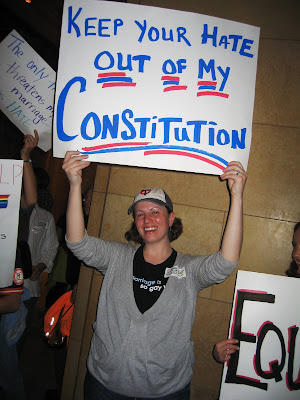 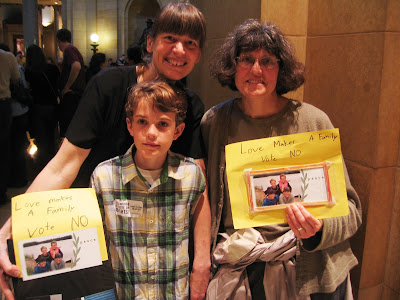 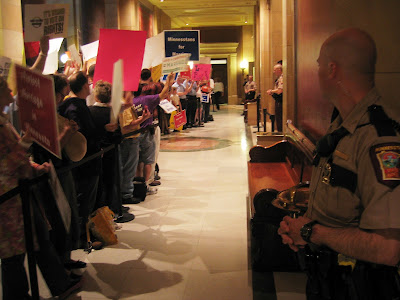 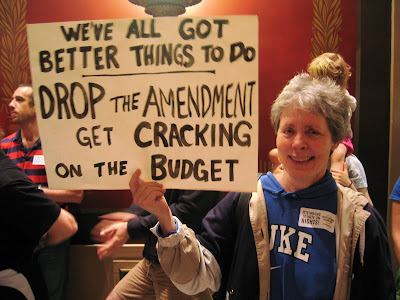 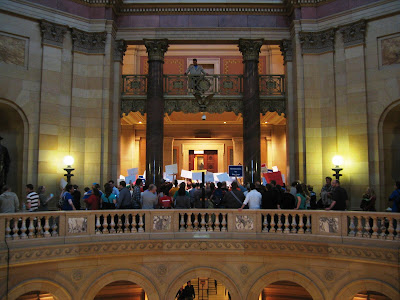 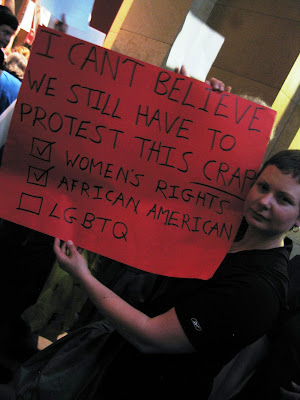