In Maine and Maryland, History is Made

For the first time in history, voters have chosen to legalize same-sex marriage on the ballot. Gay rights advocates are already celebrating this development as a critical victory and a turning point in the fight for marriage equality.

Since the late '90s, a total of 32 states have held votes on same-sex marriage, and each time, voters have opposed the measure. For opponents of same-sex marriage, this string of victories has been a crucial talking point. As Brian Brown, president of the National Organization for Marriage, the nation's leading group opposing gay marriage, said in a press release this summer: "The American people know in their heart what marriage is, and they have expressed that in the form of over 70 million votes cast in 32 consecutive state elections to preserve marriage as the union of one man and one woman."

But on Tuesday night, voters in Maine and Maryland chose to legalize gay marriage, according to exit polls and early returns.

. . . Chad Griffin, president of the Human Rights Campaign, an organization that has long advocated for same-sex marriage, spent more than $5 million in support of gay marriage in these states.

“This is a landmark election for marriage equality and we will forever look back at this year as a critical turning point in the movement for full citizenship for LGBT people," he said in a press release Tuesday night. "Voters in Maine came to the common-sense conclusion that all people deserve the ability to make loving, lifelong commitments through marriage." 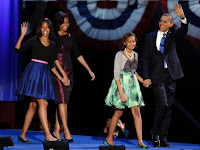 Meanwhile in Minnesota, here's the latest on the 'marriage amendment' as reported by Minnesota Public Radio:

Support for the amendment appeared strong in rural areas like Otter Tail County. In the Twin Cities, only Anoka County backed the amendment and opposition was strong in Hennepin, Ramsey Washington and Dakota counties.

. . . Supporters of the amendment said they expected to gain in later returns. Andy Parrish, the deputy campaign manager of Minnesota for Marriage, said many of the votes reported so far are in the DFL strongholds of Minneapolis and St. Paul, while more votes are streaming in from Republican-leaning suburban areas. Exit polls showed that men tended to favor the amendment and women tended to oppose it. Similarly, voters over 50 were strongly in favor and those under 50 opposed the amendment.

The campaign was the most expensive ballot contest in state history. The main group opposing the amendment, Minnesotans United for All Families, brought in nearly $10 million in cash donations. Minnesota for Marriage, the group leading the fight to pass the amendment, raised more than $5 million.

. . . For gays and lesbians and their supporters, the issue was both emotional and practical. Without the legal rights and privileges of marriage, for example, gays and lesbians can be barred from visiting long-term partners in hospitals.

Amendment opponents say the ability to marry carries a powerful message that gays and lesbians are equal to heterosexuals and deserve the same rights. They also cite religious teachings that encourage compassion and love for others.