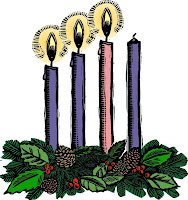 This past weekend the Catholic Church celebrated Gaudete Sunday – the Third Sunday of Advent. I attended liturgy at Spirit of St. Stephen's Catholic Community where I read the following by Megan McKenna in the community bulletin.

In the old days before Vatican II, this Sunday was called Gaudete Sunday, from the Latin "to rejoice." As the third candle [of the Advent wreath], the one wrapped in pink or rose-colored cloth, is lit, the tenor of the season shifts perceptibly into more apparent joy. What we wait for is nearer. How near? As near as the first streaks of dawn are to the sun's explosion on the horizon, just as the first light begins to assert itself ever so slowly and meekly into the darkest and coldest moment of night. This "crack of dawn" is a crack in the night's defenses, and the light begins its entrance. Along the line of the earth a faint color of roses or crimson appear, often so soft as to look like the flush on the cheeks of children or the ranges of the color of human skin. It is fleeting, a few moments glimpse of glory that mirrors our joy, our experience and hope.

I must admit it was difficult reading this in light of the horrific events that had taken place just days earlier in Newtown, Connecticut. The reference to children brought to my mind not thoughts of hope but images of horrific carnage. How could we even think about rejoicing? And what exactly were we being called to rejoice?

With these types of question in mind, I found myself almost dismissing Gaudete Sunday's call to rejoice with a sarcastic "Yeah, right!" But I didn't. And the reason I didn't was because I'd heard something on the car radio on my way to Spirit of St. Stephen's; something that kept hope alive. 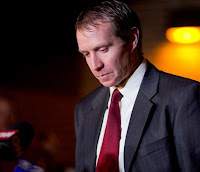 You see, I'd heard Robbie Parker (right) talking about his 6-year-old daughter Emilie Parker, one of the 20 children shot to death by Adam Lanza. Following is the transcript of the National Public Radio segment I heard on Sunday morning. It was sensitively narrated by Russel Lewis, but made truly compelling and moving by the fact that the broadcast version included Robbie Parker's own emotion-laden voice talking about his daughter.


Her name was Emilie Parker. Six years old. Long, flowing blond hair, piercing blue eyes and a sweet smile. Emilie was one of the 20 children killed on Friday at Sandy Hook Elementary School. As we learn the names of the victims, we're also learning their stories. 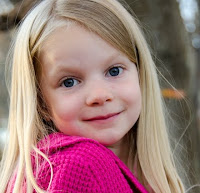 Emilie could light up a room. That's how her dad, Robbie Parker, remembers her. He says she loved to try new things – with one exception: food. She was bright and creative, he says, and was a talented artist who carried around her markers and pencils.

"I can't count the number of times that Emilie noticed someone feeling sad or frustrated and would rush to find a piece of paper to draw them a picture or write them an encouraging note," Parker told reporters Saturday night.

Parker says his oldest daughter had a gift. A compassionate streak – especially when it came to her two younger sisters, ages 3 and 4. She was a mentor, teaching the middle sister to read and the younger one to make crafts. And, he says, the siblings' bond went deeper.

"They looked to her when they needed comfort," Parker said. "Usually that's saved for a mom or dad. But it was really sweet to see the times when one of them would fall or get their feelings hurt. How they would run to Emilie to get support or hugs and kisses."

Parker stood before reporters last night, his eyes puffy and red. Pausing at times, he smiled as he talked about Emilie and remembered his last conversation with her: a brief chat before he dashed out for work on that terrible Friday.

"She woke up before I left. I'd been teaching her Portuguese. So her last conversation was in Portuguese. She told me good morning and asked how I was doing. Said I was doing well. She said that she loved me. Gave me a kiss and I was out the door," Parker said.

Parker went to work – in the newborn intensive care unit of a local hospital. He says he and his wife haven't come to grips with what happened and why.

"She always had something kind to say about anybody," he said. "Her love and the strength she gave us and the example she showed us is remarkable. She is an incredible person and I'm so blessed to be her dad."

It's Robbie Parker's humble expression of deep gratitude that stays with me – and which this past Sunday morning helped me realize that rejoicing doesn't have to mean laughing and leaping and all those other outward signs of ecstatic joy. Perhaps at its deepest level, rejoicing is all about gratitude, a quality we can choose to embody quietly and humbly, and even, as in this terrible situation, in those times when we find ourselves in the midst of anguish, loss and grief.

In certain Native American spiritual traditions, gratitude opens up pathways to the 'field of plenty.' I understand this as meaning that our expressions of gratitude open our hearts to the loving and healing presence of the sacred – both within and beyond us. Filled with this presence, we discover we have all we need to persevere; all we need to keep going in ways that, though not always easy or pleasant, are not overwhelmed or burdened by guilt or rage or hatred. They are ways that transform our lives and our world; that comfort and inspire others; and that radiate hope and, yes, a profound joy.

I see Robbie Parker and his wife Alissa as living embodiments of this inspiring, hopeful way; this way of being in a world where God's presence can often seem to be absent. They embody God's presence for me in such a world. And it is both this beautiful embodiment and this strengthening presence that I am grateful for and thus rejoice in.

Rejoicing = gratitude. I like that and believe this is rejoicing I can sustain these days. Thanks, Michael