The Wild Reed's Year in Review

Following is a third selection of 2012 Wild Reed posts, the putting together of which I found particularly meaningful. Many of these posts have also generated the most comments from readers.

If you’ve yet to read these posts then I hope you'll take the time to do so. I also hope that the experiences and insights they convey will, in some way, resonate with you and encourage and inspire you on your journey. 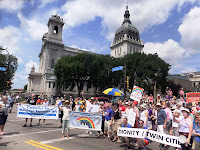 In July I shared photos and commentary on this year's Twin Cities Gay Pride Festival (June 23-24), and remembered a good friend and Minnesota Catholic gay rights pioneer. Also in July, a 'Catholic Q&A on the Marriage Amendment' that my friend Florence and I had been working on for months was finally completed and published, and I continued sharing my interest in Sufism by highlighting at The Wild Reed the writings by Fazal Inayat-Khan and Hazrat Inayat Khan. The members of the Romanov family were remembered in a special post as this month saw the 94th anniversary of their execution in July 1918.


Sufism: A Call to Awaken

A Catholic Presence at Gay Pride

Remembering David McCaffrey, One Year On

Dark Matter: "An Intriguing Aspect of the Universe"

In the Garden of Spirituality – Hazrat Inayat Khan

Catholic Q&A on the 'Marriage Amendment' 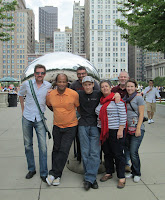 A definite highlight of August was my time spent with friends in Chicago. The work of Catholics for Marriage Equality MN continued throughout the summer, and 'Worldwide Gay Pride' was celebrated with a special Wild Reed post.

Responding to a Zealot

Weekend in Chicago (Part I)

In the Garden of Spirituality – Andrew Harvey

Your Scent I Know

In September, Catholics for Marriage Equality MN launched its "Another Catholic Voting No' yard signs, bumper stickers and buttons. Interestingly, demand for them spiked every time Archbishop Nienstedt issued a directive urging Catholics to vote 'yes' on the controversial 'marriage amendment'! A fun time was had in early September at the Minnesota State Fair, where my friend Kathleen and I enjoyed a performance by the legendary Wanda Jackson. Later in the month the beauty of this year's fall colors entertained us in an altogether different way.


A Day at the Fair

Nicolas Chinardet Asks: "What Exactly is a Bigot?"

Hey, Michael: I really love your blog and the things you post on Facebook. I've always loved talking to you and think that you are a calm voice of reason in an ever-increasing confusing world.

I did read your post on the Romanovs and enjoyed it immensely. Although they deserve compassion, their banality and non-interest made them ripe for the revolution. Nicholas was especially dimwitted and was totally oblivious to the rising discord among the poor of Russia. If he would have had a clue, his family would have left for Europe, North or South America. Unfortunately, as many as 100 million Russians, Ukrainians, Baltics, and Central Asians were slaughtered from 1915-1950. I don't know how history is going to ultimately treat the Romanovs but they certainly weren't leaders in a political sense. For another really good recent book that I know you will enjoy, get "Former People," by Smith. It is brand new and about how the landowners and the aristocracy were totally wiped out during the Bolshevik and Stalin purges in Russia. Also, read Peter Massie's "Catherine the Great." Now she was a leader!

Best wishes for a healthy and prosperous New Year.