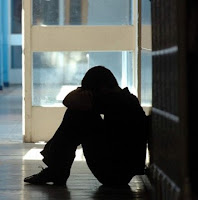 Author and art historian Kittredge Cherry, who founded and maintains the excellent Jesus in Love Blog, has composed a beautiful prayer for the Day of Silence taking place today.

Founded in 1996 by the Gay, Lesbian and Straight Education Network (GLSEN), the Day of Silence is a student-led national event that brings attention to anti-LGBT name-calling, bullying and harassment in schools.

Students from middle school to college take a vow of silence in an effort to encourage schools and classmates to address the problem of anti-LGBT behavior by illustrating the silencing effect of bullying and harassment on LGBT students and those perceived to be LGBT. . . . The Day of Silence has reached students in all 50 states and the District of Columbia, as well as those as far away as New Zealand, Singapore and Russia. More than 10,000 students register their Day of Silence participation with GLSEN every year. And public figures such as Laverne Cox, Jim Parsons, RuPaul, Tyler Oakley, Kirsten Vangsness, Kristin Chenoweth, Billy Bean, Vicky Beeching, Steve Grand, Chely Wright, and many others have publicly supported students participating in the GLSEN Day of Silence.

Following is the "long version" of Kittredge Cherry powerful prayer. For the "Twitter version" and for links to the prayer in Spanish and Portuguese, click here.

Silence is memory....
Remembering those who died young,
Driven to suicide by bullying
Or killed
Because of who they loved
Because of the way God created them
Because they were called
Gay, lesbian, bi, trans, queer, sodomite…
Remembering Tyler Clementi, Leelah Alcorn, Brandon Teena, Matthew Shepard, Gwen Araujo, Haylee Fentress, Paige Moravetz, and many, many more.

Silence is action….
Calling attention to how people are silenced
When bigotry is disguised as humor,
When prejudice turns into threats
And even violence.

Silence is solidarity…
Students, family, teachers, friends
Who care enough
To share the stigma,
To stand with the queer and questioning
Stopping hate with compassion.

Silence is pride, LGBTQ pride…
Not letting the bullies win.
Claiming our right to be.
With dignity
Part of God’s rainbow.

See also the previous Wild Reed posts:
• GSAs and the Catholic High School Setting
• Confronting Classroom Homophobia
• Dave Navarro to LGBT Youth: "We Need Your Voice"
• An Inspiring Event
• LGBTQ+ Catholic Youth Summit to Proceed Despite Chancery's Misstep
• Minnesota Catholics, LGBT Students, and the Ongoing Work of Creating Safe and Supportive Schools
• The Two Editorials that Benilde-St. Margaret's Catholic High School Doesn't Want You to Read
• How Times Have Changed
• CPCSM and the Archdiocese of St. Paul-Minneapolis – Part 3: Archdiocese Defends CPCSM's Efforts on Behalf of Gay Students
• CPCSM and the Archdiocese of St. Paul-Minneapolis – Part 4: More on the Archdiocese's Efforts to Defend the Addressing of Gay Issues in Catholic High Schools
• A Girl Named Sara: A "Person of the Resurrection"
• For the Record
• "A Useful, Essential, and Comprehensive Manual"
• Remembering and Reclaiming a Wise, Spacious, and Holy Understanding of Homosexuality