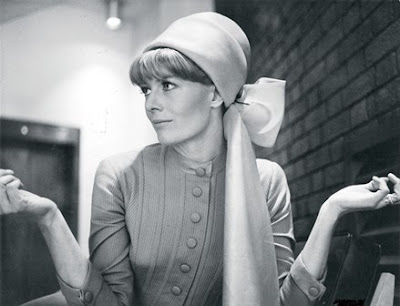 Following is what Saragossi and Free say about the latter, under the headline "Vanessa Redgrave: Speaking Out."

“It’s a kinky part of my nature – to meddle.” Like a British Jane Fonda, Vanessa Redgrave came to prominence in the sixties as a beautiful, talented actress, had a famous actor-father, has fought vociferously and passionately for many controversial causes, and has maintained a highly respected career as she crossed from doe-eyed beauty to serious roles.

As at home on the stage as on screen, Redgrave has eschewed almost all trappings of movie stardom, and has resolutely stuck to her own creative path, choosing her roles with increasing deliberation. She often stars in adaptations of stage plays, and has been careful to choose roles that, whilst not reflecting specific left-wing political views, have certainly been selected for their leanings. It's rare to find an actress who will put her beliefs on the line at the expense of her standing in the industry, but Ms. Redgrave has never shied from controversy, be it having full membership of the Workers Revolution Party, lecturing on Marxism, getting jailed at an anti-nuclear demonstration, or passionately supporting the Palestinian cause.

Having been the darling of the sixties stage and screen, and enjoying a personal and professional relationship with director Tony Richardson, she embarked on a stormy relationship with actor Franco Nero, and then one-time Bond Timothy Dalton. As her political activism became more pronounced, so her film work became less prolific. The films that Redgrave has made, however, are as impassioned as she is. Isadora (1968), The Devils (1971), A Quiet Place In The Country (1971) and Julia (1977) all reflect the burning political and sexual activism that have, and still do, run through this uncompromising actress.

Slipping easily in and out of the mainstream, Redgrave remains a challenging figure in the arts. "I've opened my mouth on a lot of subjects,”" she once said. "I thought that the more prestige you get, you have the power to do what you like. It's not true. I am misrepresented very often, but so is everybody with something to say." 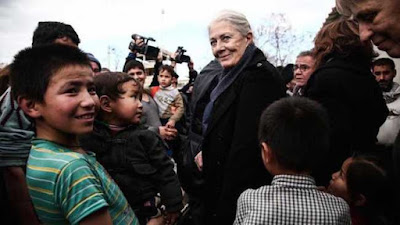 Above: Vanessa Redgrave, visiting a refugee centre in Athens, Greece – January 5, 2016. At the media conference that followed her visit to the Elaionas refugee camp, the 78-year-old actress urged the world to help debt-stricken Greece to provide shelter to hundreds of thousands of refugees who are in search of a better life in Europe and the west.

"Greece can't solve this problem and yet Greece has given us the most important lesson of all, the lesson of humanity", she said, thanking personally "all those helping the refugees from all over the world."