"A Lefty With Soul": Why Presidential Candidate Marianne Williamson Deserves Some Serious Attention 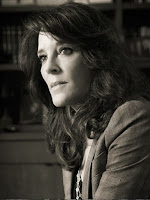 As someone who has a lot of respect for Williamson and supports her presidential bid, I am happy to see her getting more and more mainstream media attention.

Following, with added links, are excerpts from Kilgore's May 16 piece.

Marianne Williamson deserves some serious attention, and not just because she’s written four books that hit number one on the New York Times bestseller list. At a time when the leftward drift of the Democratic Party is regularly in the news, she is by any measure the most rigorously progressive candidate in the field of 23. That she wraps her progressivism in a syncretic spirituality instead of socialist materialism may even be an advantage for a politician in this God-haunted country of ours.

Pick an issue, and odds are Williamson is going to out-Bernie Bernie and out-Warren Warren. She’s for Medicare For All, unsurprisingly, but she’s also for heavy investments in preventive medicine and nutritional education, and a pretty heavy regulatory arm on those she feels are poisoning our bodies, including those who produce “high-fructose corn syrup and hydrogenated fats.” So far as I can tell, she’s the only candidate committed to reducing national stress levels, too.

[She also] goes well beyond the Green New Deal in addressing climate change. . . . She isn’t just for criminal justice reform: She’s for an official national policy of encouraging the maximum feasible release of prisoners and a shift from punishment to rehabilitation. . . . [And she] is the only candidate who is flatly for a tangible program of monetary reparations for the descendants of slaves.

. . . In the international arena, she has been closely associated for years with the idea of creating a Department of Peace (mostly notably promoted by former presidential candidate Dennis Kucinich, a close friend of Williamson) that would actively address conflict prevention. It’s fair to say she thinks we can get by with a relatively small fraction of today’s Pentagon budget.

. . . Williamson is the rare religious professional who is firmly committed to both reproductive rights and protections for LGBTQ folk.

And she matches or exceeds the progressivism of her rivals. Like Andrew Yang, she’s for a universal basic income. Like Bernie Sanders, she’s for free college, and like Elizabeth Warren, she’s for full college debt relief. Like Cory Booker, she’s for baby bonds. Like several other candidates, she’s for universal pre-K. She’s even equaled Pete Buttigieg’s commitment to a robust national service program.

Many progressives, of course, will be put off by the New Agey stuff. And it’s impossible to ignore: Williamson never stops insisting that America’s and the world’s problems are spiritual as well as economic or institutional or interpersonal. . . . But here’s the thing: Her version of metaphysical spirituality is so all-encompassing that it transcends any exclusive creed or teaching. One expert explains that the tradition she represents combines influences from “Freemasonry, early Mormonism, Universalism and Transcendentalism before the Civil War and, subsequently, Spiritualism, Theosophy, New Thought, mind cure and reinvented versions of Asian ideas and practices.” She’s less a theocrat than a pantheocrat.

So certainly for those who think Bernie Sanders and Elizabeth Warren are too timid and compromising, Marianne Williamson is worth a respectful hearing. An awful lot of people have read her books and watched her on television and come back for more. She’s very unlikely to become a viable candidate, but assuming she’s on the debate stage she may turn heads. And if nothing else, perhaps she can win an appointment as Secretary of Peace in a Democratic administration.

– Ed Kilgore
Excerpted from "Marianne Williamson Is a Lefty With Soul
New York Magazine
May 16, 2019 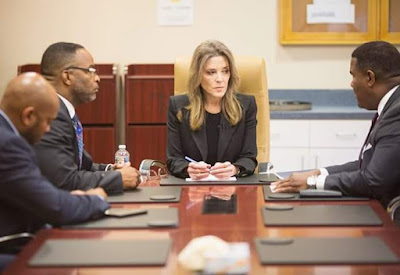 Above and below: Marianne Williamson campaigning (and advocating for justice and peace) recently in South Carolina. (Images: Marianne2020.com)

Said Marianne about this experience:

Campaigning in South Carolina over the last couple days. What a beautiful, beautiful place. There are two different political universes: the dog and pony show you see on cable news at night, with who’s up and who’s down and what percentages candidates have in polls and all of that; and then there’s the real thing, where adults get together and discuss the things that matter. That is the real thing, the profound thing, the democratic thing. That is what a campaign is all about. And it’s all day, every day. But it’s far more exhilarating than exhausting, and just when I think my physical fatigue is going to get the best of me the energy at an event lifts me up. People are amazing, and almost everyone gives me a bit of information that is helpful. There is so much goodness in this country and I feel like I’m swimming in an ocean of it. 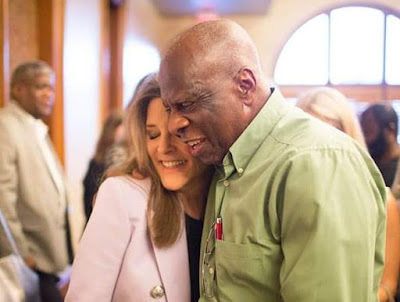 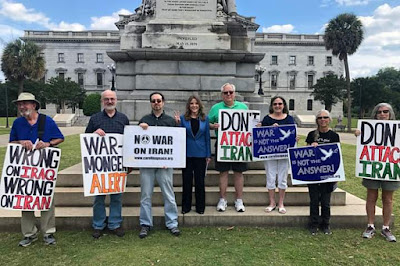 UPDATE: On May 20 Marianne was interviewed about her campaign and a number of current events and issues by ABCNews.go.com.

As one commentator has noted:

Marianne's presence in this interview is a true depiction of a candidate who will stand with us and help us realign with our true essence. Her language is a language that opens, not closes. She embodies what she says, which makes what she says easier to believe and connect with. Energetically her message is a message of "we have the power to" vs the traditional, subtle, legalistic message that communicates a "power over."

Below is the video of this interview.