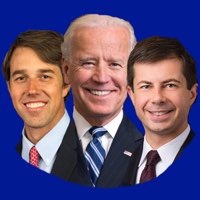 In a recent piece over at Jacobin, Luke Savage examines the Democratic presidential candidacies of Beto O'Rourke, Joe Biden, and Pete Buttigieg – “the three Bs.” He finds them wanting, noting that “all come from the same mold – they're empty suits and poll-tested brands.”

When I shared Savage's article on Facebook I received push back from some of my liberal friends. I personally don't identify as “liberal,” preferring instead either “progressive” or “radical” (in the deepest and truest sense of the word). I'll say more about this push back and my response to it shortly. But first here's an excerpt from Luke Savage's May 13 article, “We Can Do Better Than These Guys.”

Democratic power brokers and consultants have already auditioned several Anything But Bernie vehicles and are likely to test-drive a few more before the race is through. Even at this early stage, the primaries have become a kind of phony war in which an array of functionally indistinguishable establishment candidates compete to make the contest about something, anything, other than a decisive break with the political and economic status quo.

. . . Biden’s potential appeal is to a broad swath of voters who felt reasonably comfortable and secure during the Obama presidency and simply want to restore something resembling it. Far from being a hawkish, corporate sycophant and one of the principal architects of mass incarceration, their Biden is the one of early 2010s internet memes and late-night comedy fodder: an avuncular, slightly potty-mouthed but ultimately loveable good guy who wants things to get better in a non-threatening sort of way (perhaps to a lesser extent, he also appeals to some older or more conservative Democrats simply because he reflects their beliefs). Cashing in on Obama nostalgia – and presumably hoping his association with the still-popular former president will innoculate him against criticism – Biden has become the third figure [after Beto and Buttigieg] to emerge from the party establishment’s ongoing Anything But Bernie cavalcade and he may not be the last (who’s ready for a Klobuchar breakout?).

. . . From a pundit perspective, the Three Bs (Beto, Buttigieg, and Biden) appear disparate. . . . [Yet] consider how much they have in common: All three enjoy big political and media constituencies, both in the Beltway and its adjacent bases of power and influence; all three have been boosted by party mandarins as potential antidotes to the insurgent populist current represented by (among other things) the surging candidacy of Bernie Sanders; all three have been the subject of tremendous media buzz despite saying very little of substance (compare this to the ambivalence with which many of Elizabeth Warren’s proposals have been received or the withering skepticism that typically characterizes mainstream coverage of Sanders). Each favors campaigning on personal signifiers rather than any coherent program they hope to see actualized in office, appealing above all else to people’s desire for a return to normalcy during the Trump era.

Beto, Buttigieg, and Biden – their variations notwithstanding – are all different reflections of the same, largely post-political strand of liberalism, one that has so thoroughly acceded to the logic of neoliberal capital that it no longer recognizes the difference between campaigning and marketing and is stubbornly uninterested in having it explained.

– Luke Savage
Excerpted from “We Can Do Way Better Than These Guys”
Jacobin
May 13, 2019

As I noted previously, after sharing Savage's article on Facebook I received push back from some of my liberal friends. One, for instance, said that Savage's piece was “reductive and dismissive” of Beto, Biden, and Buttigieg as individuals, and that Savage was “yet another writer who thinks he knows just what we need to defeat Trump and get the U.S. back on course.”

In responding to my friend, I suggested that “what we need” becomes clear when we look back over the last 40 years or so and take note of how as a society we're devolved from the rule of the people (democracy) into the rule of money (plutocracy). The various individual traits and personalities of the candidates, though important to a degree, are secondary in my book to how a candidate understands and names the fundamental problem before us. I think it's fair to stay that what distinguishes liberals from progressives is that the latter understand this fundamental problem as the previously mentioned movement away from democratic and humanitarian values to such things as the primacy of stock holders, the power and influence of moneyed interests and lobbies, and various other destructive characteristics of the neoliberal economic doctrine.

There are a handful of Democratic presidential candidates (Bernie Sanders, Elizabeth Warren, Andrew Yang, Marianne Williamson, and Tulsi Gabbard) who recognize and name this problem, and who have developed proposals and policies to, yes, get the U.S. back on course – politically, economically, and ethically.

In short, I have little time for candidates who view, declare, and/or imply that Trump is “the problem” rather than a symptom of a much bigger problem. Making this distinction is key for me in determining the candidates I want to support. From everything I've been reading about “the three Bs” – Beto, Biden, and Buttigieg – it seems very clear to me that they are not among those candidates. 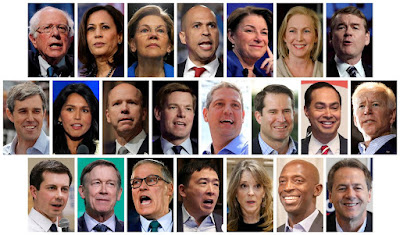 Related Off-site Links:
What Joe Biden’s Diagnosis of Trump Gets Wrong – Dara Cass (Slate, April 25, 2019).
One Big Difference Between Biden and Every Other Recent Democratic Nominee – David A. Graham (The Atlantic, May 1, 2019).
“Electability” Is a Terrible Reason to Pick a Candidate – Ryan Cooper (Common Dreams, May 2, 2019).
Joe Biden's “Electability” Argument Is How Democrats Lose Elections – Peter Hamby (Vanity Fair, May 7, 2019).
Joe Biden Is a Bad Bet – Robert L. Borosage (The Nation, May 11, 2019).
Clinton-era Politics Refuses to Die. Joe Biden Is Its Zombie That Staggers On – Hamilton Nolan (The Guardian, April 25, 2019).
Bernie Sanders Is Everything Joe Biden Is Not – Norman Solomon (TruthDig, May 2, 2019).
New Poll Suggests Trump Would Beat Biden in Key Battleground States in 2020 – Carl Gibson (GritPost, May 14, 2019).
Bernie Sanders Can Win, But He Isn’t Polling Like A Favorite – Nate Silver (FiveThirtyEight.com, April 23, 2019).
Beto O’Rourke Swings and Misses with Working-Class Michigan Voters – Valerie Vande Panne (In These Times, March 25, 2019).
Is Beto Losing His Mojo? Did Mayor Pete Steal It From Him? – Ed Kilgore (New York Magazine, April 26, 2019).
All About Pete – Nathan J. Robinson (Current Affairs, March 29, 2019).
Stop Trying to Make Pete Buttigieg Happen – David Marcus (The Federalist, April 3, 2019).
The One Big Takeaway From Every 2020 Democratic Primary Poll So Far – Dylan Scott (Vox, April 25, 2019).
These 2020 Candidates Are the Darlings of Wall Street. The Numbers Are Proof – Branko Marcetic (In These Times, April 22, 2019).
Our Crisis in Democracy Is Taking Center Stage in the 2020 Campaign – Katrina Vanden Heuvel (The Nation, April 9, 2019).
Fearful Democrats and the False Allure of Policy Centrism – Paul Waldman (Common Dreams, May 6, 2019).
More Than 20 Democrats, Two Republicans Vie for Presidential Nomination – Reuters (May 18, 2019).
Why Do Democrats Love Limp Dishrag Centrism? – Ryan Cooper (The Week, July 25, 2018).