All On a Beautiful Morning 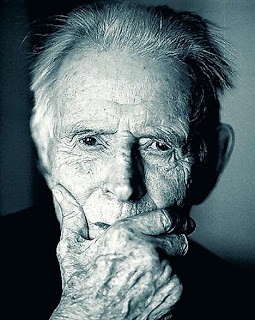 The funeral of Harry Patch, the last British combat veteran of the First World War (specifically the Third Battle of Ypres in 1917), was held yesterday in Wells, England.

Hundreds of people lined the main street to watch Patch’s coffin, shrouded in a Union flag, roll silently down the narrow road leading to the town cathedral. As the hearse passed, townspeople fell in behind, walking in silent tribute.

Patch, who died July 25 at age 111, only began talking about his experience of trench warfare in his last years. He had returned, wounded, from the Western Front and quietly lived out his life as a plumber. He outlived two wives, and both of his sons.

. . . Patch boasted that he hadn’t killed anyone in combat, but he did shoot at the legs of a German soldier who had charged with a bayonet.

“He called out something to me in German, I don’t suppose it was complimentary, but for him the war was over,” he said.

“I’ve often wondered whether he realized that I gave him his life. He was no more than 15 yards away when I shot him. I couldn’t miss, not with a Webley service revolver, not at that range.”

At least 8.5 million soldiers are reckoned to have died in the war.

“Too many died,” Patch had said. “War isn’t worth one life.”

All of which reminds me of the haunting anti-war folk song, “Two Brothers” – which the late, great Dusty Springfield performed September 5, 1967, on her BBC show. Today’s actually the twelfth anniversary of Woman of Repute, my website dedicated to Dusty. And since it's also Friday night, which is often "music night" here at The Wild Reed, it seems a perfect time to share the video of Dusty’s performance of this particular song.

So without further ado, here’s Dusty Springfield with “Two Brothers.”

One wore blue, and one wore black
Waiting by the railroad track
For their darlings to come back
All on a beautiful morning

Did you receive my email?

No, I've only ever received the comments you've left - both here at The Wild Reed and over at the Progressive Catholic Voice.

I'm assuming you tried to e-mail me at mbayly1965@yahoo.com? Perhaps you could try again and hopefully it will work this time.