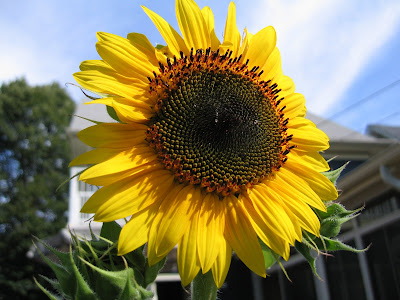 The sunflowers in my backyard are blooming! And they’re a beautiful sight.

Accompanying these pictures of my sunflowers are some interesting facts (courtesy of Wikipedia) about this particular plant. 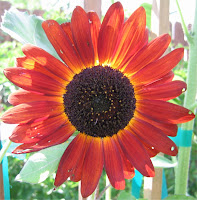 Sunflowers (Helianthus annuus) are annual plants native to the Americas, that possess a large inflorescence (flowering head). Sunflower stems can grow as high as 3m (10 ft), and the flower head can reach 30 cm (11.8 in) in diameter with large edible seeds. The term “sunflower” is also used to refer to all plants of the genus Helianthus, many of which are perennial plants. 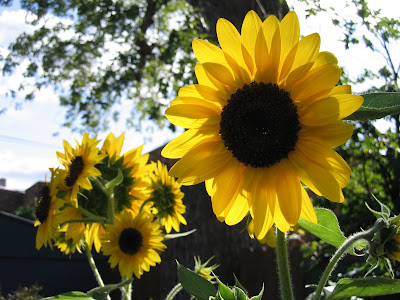 What is usually called the flower is actually a head (formally composite flower) of numerous florets (small flowers) crowded together. The outer florets are the sterile ray florets and can be yellow, maroon, orange, or other colors. The florets inside the circular head are called disc florets, which mature into what are traditionally called “sunflower seeds,” but are actually the fruit (an achene) of the plant. The inedible husk is the wall of the fruit and the true seed lies within the kernel. The florets within the sunflower’s cluster are arranged in a spiral pattern. 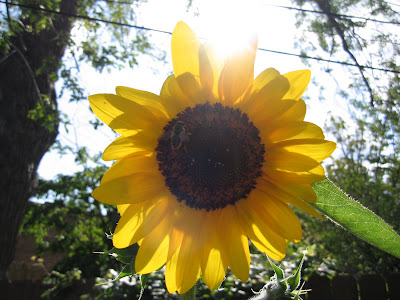 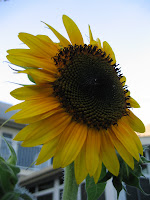 Sunflowers in the bud stage exhibit heliotropism. At sunrise, the faces of most sunflowers are turned towards the east. Over the course of the day, they follow the sun from east to west, while at night they return to an eastward orientation. This motion is performed by motor cells in the pulvinus, a flexible segment of the stem just below the bud. As the bud stage ends, the stem stiffens and the blooming stage is reached.

Sunflowers in their blooming stage lose their heliotropic capacity. The stem becomes “frozen,” typically in an eastward orientation. The stem and leaves lose their green color.

The wild sunflower typically does not turn toward the sun; its flowering heads may face many directions when mature. However, the leaves typically exhibit some heliotropism. 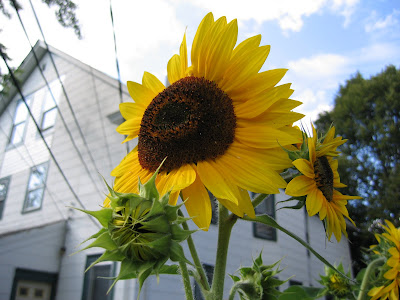 The sunflower is native to the Americas. The evidence thus far is that it was first domesticated in Mexico, by at least 2600 BC. It may have been domesticated a second time in the middle Mississippi Valley, or been introduced there from Mexico at an early date, as maize was. The earliest known examples of a fully domesticated sunflower north of Mexico have been found in Tennessee and date to around 2300 BC. Many indigenous American peoples used the sunflower as the symbol of their solar deity, including the Aztecs and the Otomi of Mexico and the Incas in South America. Francisco Pizarro was the first European to encounter the sunflower in Tahuantinsuyo, Peru. Gold images of the flower, as well as seeds, were taken back to Spain early in the 16th century.

During the 18th century, the use of sunflower oil became very popular in Europe, particularly with members of the Russian Orthodox Church because sunflower oil was one of the few oils that was not prohibited during Lent. 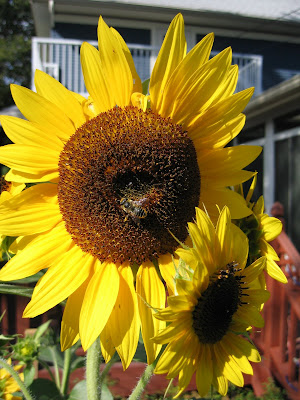