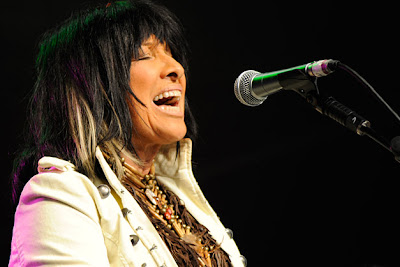 Steve Leggett of AllMusic.com has given a four-out-of-five-star review of Buffy Sainte-Marie’s latest album, Running for the Drum 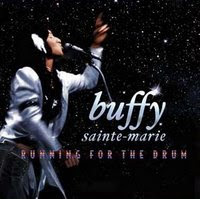 Buffy Sainte-Marie has always been a good deal more versatile as a musician than most people realize, roaming through folk, blues, country, pop, and even pioneering electronica on her various albums, always using her Cree ancestry as an anchor, and very few singers have dealt with cultural polemics as intelligently as she has. Perhaps because of her restless drive to try new forms, Sainte-Marie’s albums are often woefully (but endearingly) erratic and inconsistent, but each contains hidden gems, and while her eerie, vibrato-laden singing style can sound affected at times, her drive to constantly pull her agenda into new musical territories is inspiring. 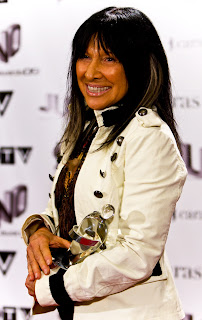 Running for the Drum is her first new album in 17 years, and while it probably won’t change anyone’s attitudes about her work, it wonderfully spotlights all of the musical themes, forms, and concerns she’s pursued in the past four decades.

The album opens with a pair of Native American rockers, “No No Keshagesh” and “Cho Cho Fire,” that draw on Native American drum rhythms, and both are fiery and invigorating. She revisits one of her finest early songs, the beautiful and haunting “Little Wheel Spin and Spin.” She pays tribute to Elvis Presley and rockabilly with the fun “Blue Sunday,” then tackles New Orleans with the chugging “I Bet My Heart on You,” which includes a piano duet with Taj Mahal. Then there are the love songs – always one of Sainte-Marie’s greatest strengths (her most famous songs, “Until It’s Time for You to Go” and “Up Where We Belong,” are both classic pop love songs, equal to any Tin Pan Alley/Brill Building creation). “When I Had You” is gorgeous and moving, as is “Easy Like the Snow Falls Down,” a love song that expands to embrace the whole of life, including its end, with compassion and calm wisdom. 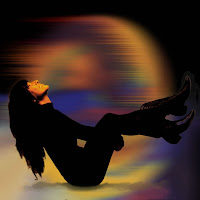 Is this a great album that will change the world? No, it isn’t. But it’s a joy to hear, and it’s comforting that Sainte-Marie is still writing amazing songs, taking firm social and political stands, performing with spirit, joy, and passion, and pretty much doing what she’s always done.

What makes this package even more of a delight is the DVD, A Multimedia Life, that is included. A documentary of Sainte-Marie’s life featuring interviews with Joni Mitchell, Robbie Robertson, Randy Bachman, and Bill Cosby, among others, and several sessions with Sainte-Marie herself, it is the portrait of a determined, vibrant, intensely creative woman who is undeniably a true American treasure. That her concerns and goals remain completely intact after all these years, to say nothing of her musical talent, is, again, very comforting. Hopefully we won’t have to wait another 17 years for the next album.

Recommended Off-site Links:
Buffy Sainte-Marie on a Roller Coaster Career that Even the FBI Kept an Eye On – Colin Irwin (The Guardian, July 31, 2009).
Beyond Images of Women and Indians: Straight-talk from a Cree Icon – Brenda Norrell (Censored News, 1999/2008).
Buffy Sainte-Marie’s Official Website