The following by John Dear, S.J. (pictured at right) was shared this morning as part of the second reading at the Spirit of St. Stephen’s Catholic Community.

I confess it: I envision a world where the United States is not killing anyone, threatening anyone, or preparing to destroy the planet. I want to live in a world without war, poverty, and nuclear weapons. Yes, I know, such a world means the demise of the state. No more empire, no more Pentagon, no more nuclear weapons, no more military bases around the world, no more torture, no more F15s and F16s, no more Trident subs, no more bombs and guns and bullets. In my criminal vision, everyone will become nonviolent. We will be a nation of Martin Luther Kings, Coretta Scott Kings, Dorothy Days, and Thomas Mertons. We will love everyone, welcome everyone, care for everyone, and serve everyone, even spend our resources to eliminate hunger, end disease, and promote peace and justice around the entire planet. Yes, I admire those un-American abolitionists who worked for the end of slavery. I consider myself a new abolitionist, working for the end of war, poverty, and nuclear weapons. 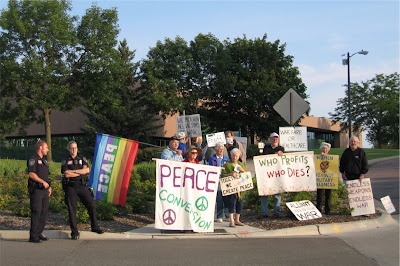 Above: Participants in the weekly vigil outside the corporate headquarters of Alliant Techsystems in Eden Prairie, MN - Wednesday, August 5, 2009. Alliant Techsystems is the largest Minnesota-based weapons manufacturer and the primary supplier of landmines, cluster bombs, nuclear missile rocket motors, and depleted uranium munitions to the U.S. Department of Defense. In addition, the corporation has sales representatives in over 60 countries. For more information about this weekly vigil, click here.


See also the previous Wild Reed posts:
Christianity and Nagasaki
A Dangerous State of Mind
The Challenge of Peace
All on a Beautiful Morning
Remembering Wilfred Owen
The Christmas Truce of 1914
John Pilger on Resisting Empire
Praying for George W. Bush
In Search of a “Global Ethic”

Good question, Paula. Perhaps Dear is being mindful of how at some point in U.S. history the owning of slaves was considered by some as an unquestionable part of American life? Similarly today, some would consider his vision of an America with "no Pentagon . . . no military bases . . . the demise of the state," etc., as treasonable, i.e., criminal. Maybe he should have placed both words in quotation marks, as you did.