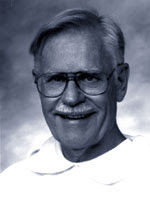 This morning I attended the funeral mass for Cletus Wessels, O.P., at St. Albert the Great Catholic Church in South Minneapolis.

Cletus, as many of my local readers would know, was a greatly loved and respected pastor, theologian, author, college professor and seminary president. He made his profession as a Dominican friar in 1951, followed by his ordination as a priest in 1957. He held a doctorate in systematic theology from St. Paul University, Ottawa, Ontario, and his thesis was published as The Mother of God: Her Physical Maternity in 1964.

He served for eighteen years as professor of theology at Aquinas Institute of Theology in Dubuque, IA, and became the third president of the Institute (which is now located in St. Louis, MO). He also taught for a time at Aquinas College in Grand Rapids as well as other centers of learning, including the Quixote Center in Hyattsville, MD, and the Weber Center in Adrian, MI.

From 1988-1997, Cletus served as pastor at St. Albert the Great in Minneapolis during times of great change as the parish closed its school and renovated its worship space. He then engaged in a ministry of lectures, retreats, and adult faith formation workshops, giving emphasis to teachings of Vatican II and to the “new universe story.” During his concluding years of ministry, Cletus wrote two books: The Holy Web: Church and the New Universe Story (2000) and Jesus in the New Universe Story (2003).

In June 2007, Cletus celebrated his golden priesthood jubilee. At that time he had began to experience the early effects of Alzheimer’s disease, but was deeply involved in planning – and enjoying – a wonderful celebration with family and friends.

He had been in residence at Providence Place since September 2008, daily visited, tended, encouraged, and loved by a large and well-organized group of loyal friends. 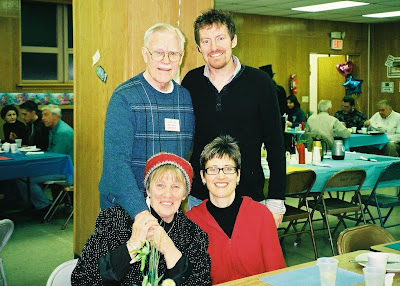 I had the honor of meeting Cletus in February 2008 when I visited St. Albert’s with my friends Jeri and Kathleen for one of the parish’s famous Lenten Fish Suppers. Cletus was aware of my work and writings and expressed both gratitude and praise – which, of course, I felt greatly honored by. He then excused himself and disappeared for about ten minutes before returning with copies of his two books which he insisted I accept as a gift. He was, undoubtedly, a very generous man, and I treasure those two signed books given to me by him.

He also gave me a copy of an insightful article he had written on sexual morality. He told me he had originally written it several years ago when he was conducting a series of workshops on understanding human sexuality. He insisted I take it and use it as I saw fit. I subsequently published it in both the Progressive Catholic Voice and here at The Wild Reed.

I’d like to honor Cletus and his theological legacy by sharing the following excerpt from the preface of his book The Holy Web: Church and the New Universe Story.

The purpose of this work is to present a new vision that integrates the tradition of the Christian church with contemporary cosmology and the universe story. There is a need for such a new paradigm because, as Chet Raymo points out in his book Skeptics and True Believers, “Today we have a scientific story of creation, but we have not learned how to connect the new story to our search for spiritual fulfillment . . . and we have not integrated the story into our lives as believers and seekers” (p. 127-128). Such an integration, I maintain, is essential both for the Christian church and for all those searching for spiritual fulfillment.

There is also a deeper purpose [to this book:] to help the reader discover and intuit more deeply the new story of the universe and the possibilities for a new vision of the church flowing from that story. . . . I invite readers of this book to an in-depth discussion of a new paradigm of the church emerging from the tremendous knowledge explosion of the last 150 years and the development of a new understanding of creation never before imagined. . . .

A new paradigm often challenges our current use of language. This will demand first of all that we look more deeply into the way we typically use words, such as infallibility. When people hear the word infallibility they think of the pope with the unilateral power to define Christian doctrines, which must then be believed and accepted by all Catholic, putting an end to all discussion. This is a stereotype. As the word infallibility is used in Chapter 6, it means a process that takes place within the entire Christian community in the common search for the living truth of the gospel under the guidance of God’s Spirit. The pope, as the bishop of Rome, may in special circumstances define a doctrine that is already the common belief of the people, but this definition is always couched in human words and, as such, is open to an ongoing process of fuller understanding and unfolding.

Second, at times a new paradigm requires new language to articulate the perception of a new reality, such as the holarchical church – a term I introduce in Chapter 5. Over the years, as I have experienced the changing structures of our earth, our society, and our church, I have become convinced that we must develop new terminology to articulate the new theories about the way in which organizations function. Our current language is often inadequate. For example, the organizational structures of many Christian churches are based on a hierarchical and patriarchal model, whereas contemporary research calls for emerging models based on self-organization, mutuality, and interdependence. It is my belief that such models cannot be couched in hierarchical language nor in distinctions such as that between clergy and laity. These new models can be articulated more adequately in terms of the new language of holarchy.

Third, even common words, such as the word holy used in the title of this book, will take on a new depth of meaning in the light of the new universe story. For me at times, and perhaps for other people, the word holy is ambiguous and flat; it can be pious and churchy, and occasionally rigid and unchanging. These connotations of the word holy just do not fit with my sense of “the holy web.” In this book, holy describes the reality of goodness, truth, and wholeness within the universe whose inner source is God. To be a creature emerging from the inner presence of the holy God is to be holy. And human holiness is found in our very being as well as in our conscious awareness of and our integration with this dynamic power of God within ourselves. Holiness is not something we do or practice or merit, but it is something we experience as a dimension of the universe. Thus, in this book, when we use the phrase holy web, we are describing the web of relationships found in the entire universe. When we talk about a galaxy or the Earth or the church as a web of relationships, we are describing these realities as part of the holy web.

a part of the Holy Web


For more of Cletus’ writings at The Wild Reed, see:
Relationship: The Crucial Factor in Sexual Morality
The Holarchical Church: Not a Pyramid but a Web of Relationships