Bishop Gumbleton: A Priesthood Set Apart and Above Others is Not the Way of Jesus Following is an excerpt from a recent homily by Bishop Thomas Gumbleton, whom I consider the most courageous and faithful-to-the-Gospel bishop in the U.S.

I have to say that I’ve never bought into the idea that someone becomes ontologically different simply because they have been ordained a Roman Catholic priest. I find it both refreshing and hopeful that a bishop has the courage to seemingly challenge this concept. 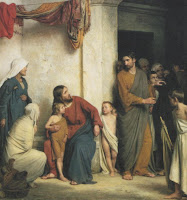 Jesus tries to give an image that the disciples might really catch on to. They’ve had a hard time accepting what he’s trying to say. They refused to accept that he’s going up to Jerusalem to let himself be handed over to his torturers and be put to death. They want him to use power and might and so on. He takes a child in front of them and he draws that child into their midst; he embraces the child. This isn’t because children are cute and lovely and so on. No; what Jesus was [reminding] them [of was that in] that culture and at that time, a child was a person without any rights, had no power.

This is within the Roman Empire and they simply were not even allowed the possibility of any kind of self-determination, even as they were growing up, so a child is a symbol of someone who is completely without right, without power, and can be used in any way. Jesus said, ‘When you receive a child like that into your midst, you’re receiving me, because I am one who rejects all power, all violence, all domination. I allow myself to be helpless, but always pouring forth love.’ See, helpless in a physical way, helpless in a materialistic way, but in charge in a sense, because of the love that he pours forth that can transform and change everything.

Have we really heard this message of Jesus? And within both the church and the world in which we live, do we try to carry out this message of Jesus? I find it disappointing really, that within our church right now, there seems to be kind of a movement to restore a certain kind of domination and status and power, if you will, to those who are to be the leaders of our communities, ordained ministers.

In recent weeks, Pope Benedict XVI . . . in one of [his] talks [in Rome] . . . told the crowd that Mary, the Blessed Mother, had (and these are his words) “a special affection for priests as her sons because they are more similar to Jesus.” In other words, the ordained priest, just by being ordained, has a status that puts him apart from, and obviously above, others in the church. 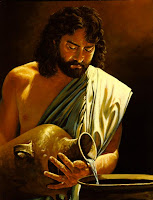 Now that isn’t the way of Jesus. At the Last Supper, what did he do? He got down and washed the disciples’ feet, but he was celebrating what we think of as the first Eucharist. He wasn’t presiding, overseeing; he was acting as a servant. He had given up power; he didn’t need power like that, the world’s power. And here were are, now they’re talking about putting the altar rail back so there’s a barrier between the priest and the people, make sure the priest is above and better, holier. Not true!

It’s a community of disciples that Jesus calls together, where everyone is equal in freedom and dignity. No one is over others, but we seem to have fallen back into that pattern of wanting to have hierarchs in the church, and then obviously, “lower-archs,” if you want to call them that, the people in the pews. Wrong – that’s not the way Jesus intended it. We really have to struggle not to let that happen.

After the Second Vatican Council, there was a real movement forward to make our church a community of disciples, again everyone equal in freedom and dignity, no one over others. We need to make it become that way again, or even move more fully in that direction, because that’s the only way we’re going to be a light to the world around us, if we really become a servant church and those leading in the church become servant ministers.

To read Bishop Gumbleton’s homily in its entirety, click here.


See also the previous Wild Reed posts:
Bishop Thomas Gumbleton: “It Isn’t the Church You’re Being Asked to Say Yes To . . . It’s Jesus”
Stamping Out the Light
Authentic Catholicism: The Antidote to Clericalism