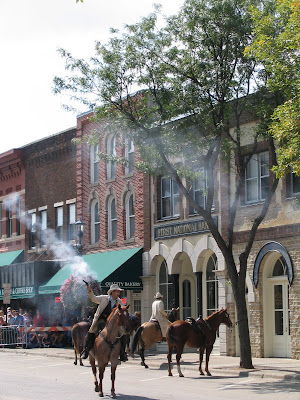 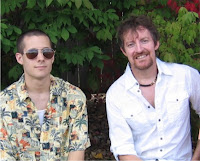 This past Sunday I accompanied my friend Phil and his parents to the Minnesota town of Northfield for the annual “Defeat of Jesse James Days” celebration.

To be honest, I had no idea that Jesse James was ever in Minnesota. But here indeed he was on September 7, 1876 - as a participant in a failed bank robbery that tragically saw two Northfield citizens - Joseph Lee Heywood and Nicholas Gustafson - killed by the James-Younger Gang.

Following is the historic account of what happened, courtesy of the official “Defeat of Jesse James Days” website. 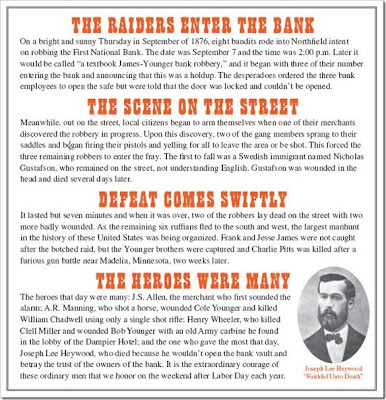 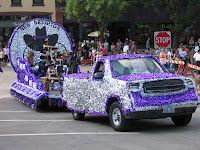 Right and below: As well as a very authentic-looking reenactment of the attempted robbery, Sunday’s festivities also included a colorful street parade and an arts and crafts fair. 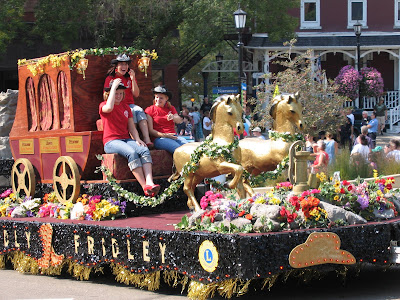 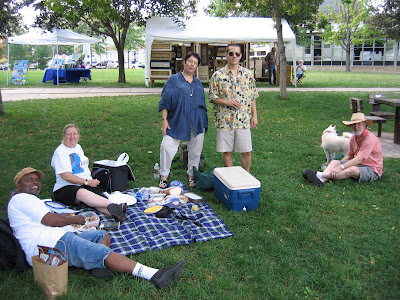 Above (from left): Rick, Jackie, Noelle, Phil, and John. 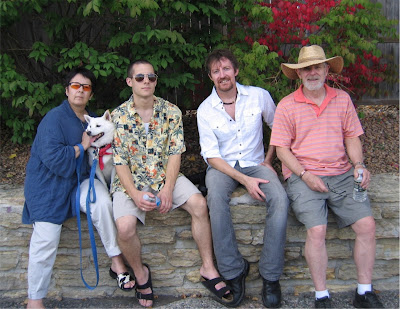 Above: With Phil and his parents (and the cute family dog, Quinn). 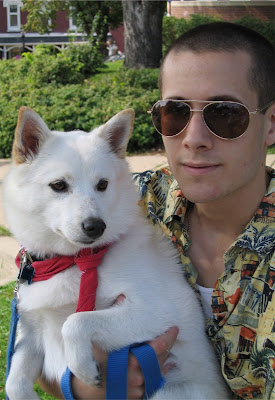 Above: Phil and Quinn.

Michael, You may be interested in a forthcoming book now being written about the Jesse James family. The book, presently titled SOUL LIBERTY, accounts the colonial Virginia origins of the James as rebel Baptist ministers. The family migrates into Kentucky where they establish a coalition of churches, that not only leads to the founding of the Southern & Missouri Baptist Conventions, but they also establish towns, communities, local & state governments, & win of the War of 1812 in an effort to extend & promote their Baptist faith & beliefs.

While defining the fundamental spiritual character of the James that ever confounds expectation, the book further accounts the family’s foundations in politics, education, finance, & law, as progressive community builders.

Little known about the Jesse James family are the facts that Jesse’s son was an attorney, & his great grandson broadened civil rights for gays in a famous lawsuit brought against Disneyland. A nephew of the outlaw was a Jesuit priest who confronted Marxist regimes in South America, who later retired to the ivy covered halls of a Boston law college. Another cousin co-wrote the film The Great Dictator with Charlie Chaplin & the Broadway play Bloomer Girl, but was blacklisted by HUAC in the McCarthy era. As educators, writers, & poets, the Jesse James family has founded schools, colleges, & creative educational opportunities.

The women among the Jesse James family first breached the all male dominance of the National Democratic convention. One also established the first residential planned community in America.
Today, James women are influential as powerful Washington D.C. attorneys who represent national non-profit organizations for social causes.

You can learn more about the James and their relatives at their own family web site STRAY LEAVES - www.ericjames.org

Thank you for sharing all of this interesting information about your family. I look forward to the release of Soul Liberty and hope that it gets a good reception from the critics and a wide readership from the general public.