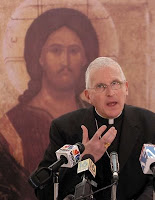 Last night my friend Connie alerted me to an interesting New York Times commentary by David Gibson, author of The Coming Catholic Church: How the Faithful are Shaping a New American Catholicism.

The Roman Catholic bishop of Scranton is not normally known as a kingmaker – or kingbreaker – in electoral politics. But during last year’s presidential campaign, with pro-choice Catholic and Scranton native Joe Biden on the Democratic ticket, and the working-class voters of northeast Pennsylvania seen as keys to the keystone state and the Electoral College, Scranton suddenly moved to the spotlight. 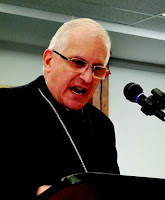 And the local bishop, Joseph F. Martino, took full advantage of that platform. Martino became for many the angry face of the anti-Obama wing of the Catholic hierarchy thanks to his intemperate blasts about pro-choice politicians and an overweening administrative style that irritated the flock and even his brother bishops.

Now, in a stunning turn that has taken even veteran church-watchers by surprise, Martino on Monday resigned his post under highly unusual circumstances – citing the stress of the job and saying he could not continue in a post that should have been his for another dozen years, at least.

But church insiders say Martino had also worn out his welcome with his brother bishops and the Vatican. So his resignation may be further evidence that the U.S. hierarchy is divided between moderate voices and a more strident conservative minority that is struggling in the wake of Obama’s success with Catholic voters.

Martino is only 63, and adding to the air of mystery and suspicion surrounding his resignation, his auxiliary, or assistant bishop, also resigned at the same time. The resignation of the auxiliary, Bishop John M. Dougherty, was put down to age; he is 77, and the normal retirement age for bishops is 75. Martino’s sudden exit was officially chalked up to undisclosed “health reasons,” according to a statement from the United States Conference of Catholic Bishop in Washington, which said that Pope Benedict XVI had accepted Martino’s resignation.

But at a press conference Monday morning, Martino himself alluded to the divisions his style had brought to the diocese, and the toll it had taken on him mentally and physically: “For some time now there has not been a clear consensus among the clergy and people of the diocese of Scranton regarding my pastoral initiatives or my way of governance. This development has caused me great sorrow, resulting in bouts of insomnia and, at times, a crippling physical fatigue.”

“I seek forgiveness from anyone whom I may not have served adequately as bishop, due to my human limitations,” Martino said, adding later: “As the song says, you have to know when to hold them and when to fold them. And I think it’s time to move on.”

Many in Scranton, and beyond, would agree. In fact there are strong indications that Martino was pushed before he jumped. . . .

See also the previous Wild Reed posts:
The Bishops and Obama (Part 1)
The Bishops and Obama (Part 2)
What the Notre Dame Controversy is Really About & What's Really at Stake
Responding to Bishop “We Are at War” Finn
Weakland, the Clergy Sex Abuse Scandal, and Homophobia
Archbishop Nienstedt’s “Learning Curve”: A Suggested Trajectory
Why the Bishops Are Being Ignored
Will We See Change?
An Australian Bishop’s “Radical” Call for Reform
Bishop Thomas Gumbleton: “It Isn’t the Church You’re Being Asked to Say Yes To . . . It’s Jesus”
Gay Bishop Feels “No Diminution of God’s Love”

I wish the bishop had called a diocesan synod. When leaders try to govern from the top-down, especially in a democratic society such as ours, they are destined for trouble. A synod would have allowed clergy and laity to dialogue with each other and with their shepherd. Very few bishops, it seems, have the guts...or heart...to do this, unfortunately.

Greetings from the Scranton Diocese. I think there is relief by many in the Diocese that Bishop Martino has resigned. A lot of people in the Diocese are in pain because churches and schools have been closed. Some of this was necessary but it was not always done in a sensitive way. In the largest county in the Diocese (Luzerne), 3 of the 4 Catholic high schools were closed in one year and the parents had no say. It is stressful for the priests of the Diocese because people are going to Mass less and giving less money to the Church. Bishop Martino is not a "people person" and he really didn't seem to care for the people here. It is good that he was a strong voice for the pro-life cause but again he turned some people off because he often came off as strident. He did have strong support among people that disliked blacks, Latinos and gays but the public at large is becoming more tolerant and accepting so he turned off a lot of moderates. Please pray that for the people of the Scranton Diocese that we get a good bishop. We need a pastoral bishop who cares about the people.