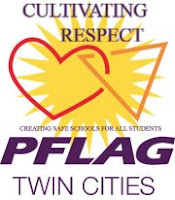 Yesterday I had the honor of speaking at a very inspiring event. It was a day-long conference entitled "Cultivating Respect: Creating Safe Schools for All Students." Geared for teachers, social workers, administrators, counselors, parents of GLBTQ individuals, students, GLBTQ youth and allies, and Gay/Straight Alliance leaders, the "Cultivating Respect" conference was organized and sponsored by PFLAG Twin Cities and held at Hamline University in St. Paul.Along with three others I spoke on a panel entitled "How Religion Can Help (Since We’ve Mainly Done the Opposite)." I shared my insights and experiences as a Catholic educator, author and reformer. Here's how the panel was described in the conference program:

During my presentation I noted that in writing and compiling Creating Safe Schools for LGBT Students: A Catholic Schools Perspective, I consciously made a point of highlighting those aspects of Catholic teaching that affirm and support the creating of an informed, respectful and safe environment for LGBT students in Catholic schools. For instance, in their 1981 document Education in Human Sexuality for Christians, the U.S. Catholic Bishops note that:

[Teenagers] need basic information regarding homosexuality. . . . They should be helped to integrate their developing sexuality into their relational lives in ways that reflect respect for themselves and others and foster mutual personal growth. . . . Knowledge, in itself, is not harmful. Therefore, every major facet of knowledge and values in relation to sexuality should be covered at some point . . . including such subjects as homosexuality. . . . To withhold knowledge or to answer questions dishonestly can only lead to misinformation and a warped set of values.

Since 1981, however, the bishops' wise call for knowledge and the honest answering of questions (i.e., dialogue) has been ignored in favor of a demand for unquestioning obedience to the clerical caste's understanding and teaching on human sexuality. 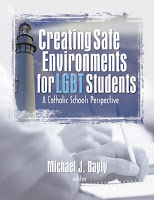 Not surprisingly, then, when Creating Safe Environments for LGBT Students: A Catholic Schools Perspective was published in 2007, the Vatican response to it was one of denouncement. Archbishop Angelo Amato of the Congregation for the Doctrine of the Faith wrote to then-Archbishop Flynn of St. Paul-Minneapolis and informed him that the book was “not suitable to be used in Catholic schools” as it “calls into question the teaching of the Church on homosexuality.” Clearly, unquestioning obedience to the church's erroneous and dysfunctional sexual theology trumps efforts to create safe and respectful environments for students. This is a great tragedy as the demand for unquestioning obedience cancels out any need for listening. And without listening there can be no true respect for others.

Of course, during my presentation I also highlighted positive aspects of the Catholic tradition. In particular, I talked about Catholicism's sacramental nature from which we discern that the hallmark of the faith isn't unquestioning obedience but openness to God throughout creation – including within the lives and relationships of LGBT people. I also talked about the primacy of conscience and the church's teachings on social justice. As I've noted elsewhere, the social justice teachings of the Church are clearly rooted in Jesus’ life and preaching. Not so the church’s teaching on homosexuality. For many Catholics the call for social justice supersedes certain teachings of the church that reflect a medieval and inadequate understanding of human sexuality – teachings that, accordingly, are unresponsive to the presence and movement of the Spirit in the lives of LGBT people.

PFLAG's "Cultivating Respect" conference facilitated and modeled the type of knowledge-sharing, listening and dialogue that is sadly lacking in the Catholic Church, at least at the official level. It should be noted that such respect-cultivating activities are definitely taking place at the grassroots, as evidenced locally by the "home church" gatherings currently being facilitated by Catholics for Marriage Equality MN.We have a long way to go, however, before topics like the following ones covered by the "Cultivating Respect" conference are openly discussed and explored at all levels of the Catholic Church.

• A Place at the Whiteboard: Diverse Educational Professionals Collaborating to Create Safe Schools for LGBTQ Youths• Impact on Physical and Mental Health: The Chronic and Acute Trauma of Bullying in LGBT Youth• How to Create Safe Spaces for Transgender Students: Language and Practices to Ensure a Safe and Nurturing Environment for Students on the Transgender Spectrum• Creating Safe Spaces Beyond the GSA: How Students Can Create Positive Change in Their Schools• The Minnesota Marriage Amendment: Is it Government-Sanctioned Bullying? 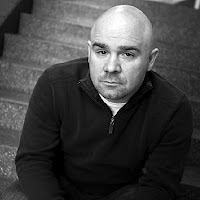 I should also mention that the conference's keynote speaker was Jamie Nabozny who, after years of harassment and abuse as a student, won a landmark lawsuit in federal court that established that young people deserve a safe educational experience. His story is told in Bullied, a short documentary film produced by the Southern Poverty Law Center. I can remember hearing Nabozny speak in 2002, when he was the featured speaker at a Catholic Pastoral Committee on Sexual Minorities (CPCSM) event at St. Albert the Great Church in South Minneapolis.

Gay and Lesbian Issues
on Tap at Bullying Summit


Organizers of an anti-bullying summit in St. Paul Friday say they're glad the issue is getting wider attention, but schools still have more to do.The Parents, Families and Friends of Lesbian and Gays-hosted event at Hamline University focuses specifically on the bullying of gay and lesbian school students.Board member Gretchen Murr said the need for more information has been evident when she speaks in schools."We were finding teachers begging for information," Murr said. "We decided that we were going to try to put it together."Speakers included Jamie Nabozny, who won a landmark LGBT harassment lawsuit in the 1990s.He said some schools and students are doing great work to raise awareness, but there are still stigmas to overcome. He cited the example that physical bullying is treated as more severe than verbal bullying."The words that were spoken to me and the things that were said to me will stick in my head forever," he said. "But I don't remember the physical pain I endured from the beatings, when people hit me. I don't remember that. And so it bothers me when kids, but even adults, will downplay the impact that verbal harassment has."Nabozny said prevention efforts must include all three people involved in bullying: the bully, the victim and the bystander.The Hazelden Addiction Treatment Center is planning an anti-bullying event in March.

Thank you for your thoughtful reflection! As a Catholic School teacher, I look forward to digging into the wonderful list of resources you have provided.