The Spy Who Came in from the Cold Cream 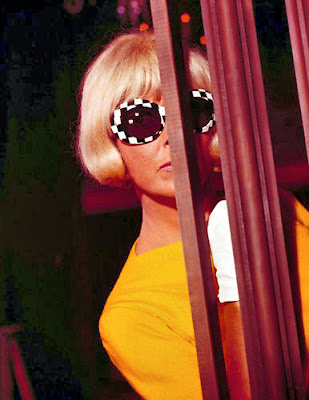 Some light fare today after a rather intense week . . .

Last night I had some friends over to my home in St. Paul for a Doris Day movie night. Day, as I'm sure my readers are aware, is the top-ranking female box-office star of all time. She's also one of the world's most renowned and highly successful recording artists.

The 87-year-old Day has been in the news recently, what with the announcement that she is the latest recipient of the Los Angeles Film Critics Association's Lifetime Achievement Award, and the release last year of My Heart, her first album of new material since 1967's The Love Album. True, this "new material" is actually mostly a collection previously unreleased tracks recorded in the mid 1980s. Still, with its debut at No. 9 in the United Kingdom, Doris Day became the oldest female artist to ever have had a top ten album of "new" material on the U.K. Billboard charts. 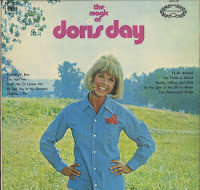 Doris Day is, of course, a gay icon for many. The Advocate notes, for instance, that "Secret Love," a song Day recorded for the 1953 musical Calamity Jane, won an Academy Award for Best Song and was "quickly adopted as an early gay and lesbian anthem." She was certainly something of a role model for me as a little gay boy growing up in Australia. I'd watch The Doris Day Show and any and every Doris Day movie that was shown on TV. Also, I'm pretty sure The Magic of Doris Day was the first album I ever owned - bought for me, upon request, by my Aunty Phyllis when I was just a kid.

What is it about Doris Day that appeals to gay folks? I think it's her plucky determination to get done what needs to be done – despite all manner of challenges and obstacles. Oh, and her sunny disposition while doing so also appeals to many.

The first movie we watched last night certainly conveyed all these qualities. It was the 1967 spy spoof Caprice, in which Day plays a cosmetics consultant whose specialty is industrial espionage – "A spy," she claims, "who came in from the cold cream."

Here's what Kimberly Lindbergs of Cinebeats says of Caprice: 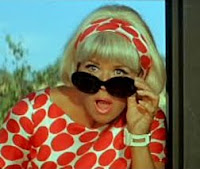 Caprice (1967) is a film often talked about disparagingly by people who’ve never actually seen it, and it’s nowhere near as awful as you’ve been led to believe. Yes, the film has its problems and its stars (Doris Day and Richard Harris, who’s rarely looked so good) don’t seem to have much chemistry on screen, but this entertaining spy satire also contains some really funny bits, well-done action scenes, fantastic Ray Aghayan costumes and a wonderfully polished pop-art look thanks to director Frank Tashlin and Oscar winning cinematographer Leon Shamroy.

The film's "pop-art look" and costumes were indeed fabulous! And the following will give you a taste of these aspects of Caprice.


The second Doris Day film we watched last night was far removed from the colorful and madcap antics of Caprice. It was the the 1956 "woman-in-peril" thriller Julie. 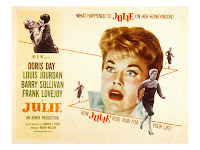 Set on the picturesque coast of Monterey, the film takes a dark turn immediately after the opening credits and we are plunged into a paranoid universe. Julie Benton (Day) is having serious doubts about her second marriage. To start with, Lyle (Louis Jourdan), her new husband, has an uncontrollable temper. . . . He's also insanely jealous and eventually reveals to Julie that he killed her first husband so he could marry her. When she attempts to run away from him, Lyle stalks her relentlessly, finally exploding in homicidal rage aboard an airplane where she is serving as a flight attendant. 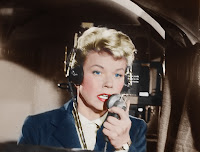 Indeed, the film is somewhat of a forerunner to Airport 1975, with Day's character having to land the plane at the film's climax!

Yes, it was a night of great entertainment, good food and good company. And I want to send out a special 'thank you' to my friend Rick for providing the DVDs of two great Doris Day films we watched. 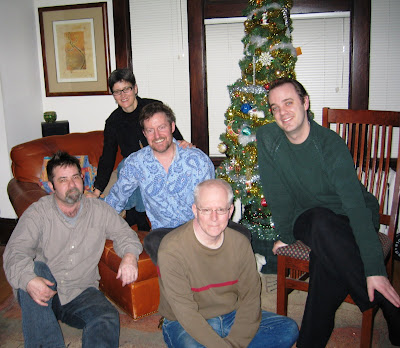 Above: Sitting center (in my Caprice-inspired shirt?!) with, from left,
Brian, Kathleem, Rick and Bob. Bob's partner John took this great photo of
the founding members of the Twin Cities' Doris Day Appreciation Society!