The following media release was issued yesterday by the editorial board of The Progressive Voice, on which I serve as editor.

Archbishop Nienstedt’s Marriage Amendment Message to Priests:
“There Ought Not be Open Dissension on This Issue” 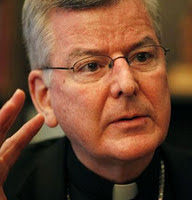 In an October 19, 2011 speech to the priests of the St. Paul-Minneapolis Archdiocese, the text of which was recently obtained by The Progressive Catholic Voice, Archbishop John C. Nienstedt (left) declared that the “movement to protect and defend the definition of marriage as a union between one man and one woman . . . [is] one of the greatest challenges of our times.”

The Archbishop also stated that he expects “all the priests and deacons in this Archdiocese [to] support this venture and cooperate with us in the important efforts that lie ahead.”

"There ought not be open dissension on this issue," Nienstedt said.

Because of what he perceives as “the gravity of this struggle, and the radical consequences of inaction,” Nienstedt placed a “solemn charge” upon all archdiocesan priests:

On your ordination day, you made a promise to promote and defend all that the Church teaches. I call upon that promise in this effort to defend marriage. There ought not be open dissension on this issue. If any have personal reservations, I do not wish that they be shared publicly. If anyone believes in conscience that he cannot cooperate, I want him to contact me directly and I will plan to respond personally.

“When I first read the text of the Archbishop's speech I couldn't believe that he was telling priests and deacons to be silent if they were opposed to the marriage amendment,” says Paula Ruddy, parishioner at St. Boniface in Minneapolis and member of The Progressive Catholic Voice editorial board. “Is one's position on whether the State constitution should be amended a matter of Church doctrine? How are Catholics to form their consciences if their pastors are not candid with them?”

The Progressive Catholic Voice describes itself as “an online, independent and grassroots forum for reflection, dialogue, and the exchange of ideas within the Catholic community of Minnesota and beyond.” The text of Archbishop Nienstedt’s speech, written in the form of a letter and sent to priests who were unable to attend the October 19 gathering, came to the attention of the forum’s editorial board in early January. The members of the board chose to publish the letter as they are aware that the marriage amendment issue is one that many Catholics in the Archdiocese feel very strongly about. “We at The Progressive Catholic Voice also believe it is important to model a way of being church that is open, honest, transparent and participatory,” said editor Michael Bayly.

“The Archbishop’s message is problematic in many ways,” added Bayly. “As a gay man, I find it particularly offensive that he can’t even bring himself to name gay and lesbian people. We’re simply a ‘minority’ seemingly out to destroy the church and civilization. Such an absurd caricature would be funny if not for the hurtful and damaging consequences to individuals, couples and families resulting from the Archbishop’s anti-marriage equality activism.”

The Roman Catholic bishops of Minnesota, led by Archbishop Nienstedt, have long campaigned against civil marriage rights for gay and lesbian couples. In a January 3 article on The Huffington Post, Bernard Schlager, Ph.D., Executive Director of the Center for Lesbian and Gay Studies in Religion and Ministry at the Pacific School of Religion, wrote that such activism is “nothing other than a brazen – and unwise – attempt by religious leaders of one denomination to impose their views on everyone (regardless of religious affiliation, if any) throughout an entire state."

"It is one thing to prohibit marriage equality for Catholics in terms of the Catholic sacrament of marriage;" Schlager writes, "it is quite another thing for a bishop (or two or three) to work to restrict the rights of all lesbian and gay Minnesotans – non-Catholics and Catholics alike – who may seek civil marriage.”

Despite his criticism of the bishops, Schlager notes that “there are many, many churchgoing American Catholics who believe in marriage equality, as has been demonstrated by recent surveys that show significant support for gay marriage among Catholics in the US.”

The full text of Archbishop Nienstedt’s letter can be found here.

Labels: Archbishop Nienstedt, The Struggle for Marriage Equality in Minnesota

The Progressive Catholic Voice has done the Church a great service in bringing Archbishop Nienstedt's directive to light. This kind of abuse of power relies upon the silence of the victim in order to be maintained. By exposing it, PCV has diminished the threat to all Minnesota Catholics. Thank you for your courage!

Michael, you and the PCV board have done a great service to the community in making public the archbishop's letter to the priests.

It elevates the debate to a new level, one that will prove to be significant in the history of this fight when all is said and done.

Looks like Archbishop Neinstedt is still carrying on his crusade against gays. It is all very troubling. It has to be painful for you guys up there.

My son attends a catholic high school in the Minneapolis St Paul archdiocese. Parents were told late last week: Attention, Parents of Seniors:
As he said in a recent letter, Archbishop John Nienstedt has undertaken an initiative to assist Archdiocesan Catholic high schools, in forming young people with “an understanding of the beauty and purpose of marriage as well as the cultural and societal challenges of today.”
To that end, the Archbishop has asked teams of presenters - a priest and a married couple - to spend time with our seniors “to discuss the doctrinal truths and experiential realities of sacramental marriage." Time is included for questions and discussion with students.
My son has told his religion teacher that he will not attend. We are in full support of his decision. I am appalled that instructional time will be given to this presentation to a captive audience. There is enough homophobia in an all-boys school without an "official" Catholic message against homosexuality. We have always tried to emphasize to our children that the church is the community with which we worship every week, not the heirarchy. I am deeply saddened that my son will question, and perhaps reject, his faith because of these kinds of messages.