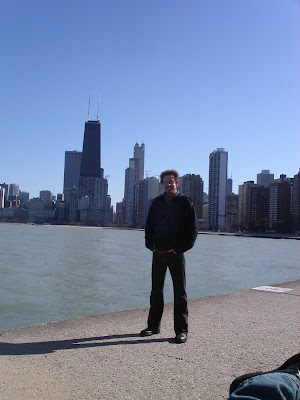 Recently I traveled to Chicago to spend some time with my friend Eduard.

Following are some snaps from my four-day visit to the Windy City! 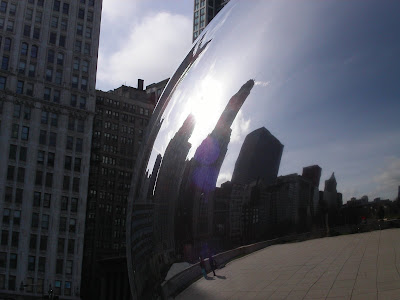 Above and below: “Cloud Gate,” artist Anish Kapoor’s intriguing 110-ton, highly polished steel monolith popularly referred to as “The Bean.”

Unveiled in July 2004, the Bean is part of Chicago’s Millennium Park, a prominent civic center in the downtown area. Notes Travel World magazine writer J.M. Pasquesi: “The magical Bean is just a part of the spectacular new 24-acre park that runs east of Michigan Avenue from the Art Institute of Chicago to Randolph Street. The first Chicago city planner (circa 1909) and powerhouse architect, Daniel Burnham, once said, “Make no little plans, for they have no magic to stir men’s blood.” Current Mayor, Richard M. Daley, has seen to it that the city splendidly lives up to that lofty ideal, because the park is also home to a new music pavilion designed by world-renowned architect Frank Gehry, as well as the first ever Gehry-designed Bridge.” 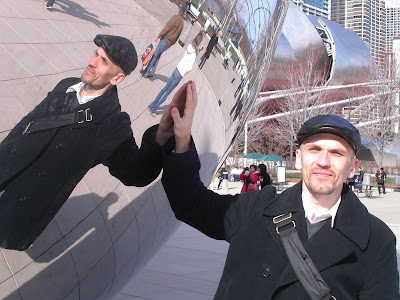 Above: Eduard standing next to the Bean. 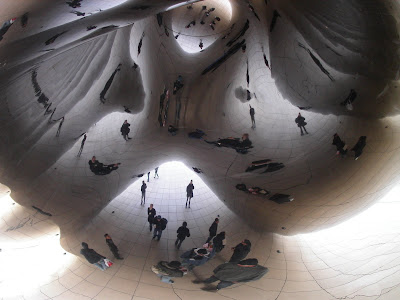 Above: The 12-foot high underbelly of Cloud Gate is called the “omphalos” or navel, and multiplies reflections in a vortex. 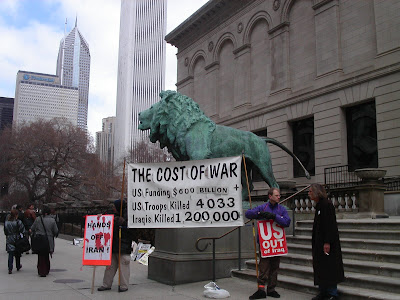 Above: Justice and peace activists outside the Art Institute of Chicago – Sunday, April 13, 2008.

After a just a short time wandering through its numerous galleries, I could definitely understand why the Art Institute of Chicago is cited as one of America’s premier fine art museums.

Some of its more well-known works include: Sunday Afternoon on the Island of La Grande Jatte by Georges-Pierre Seural, Paris Street; Rainy Day by Gustave Caillebotte, Nighthawks by Edward Hopper, and American Gothic by Grant Wood. 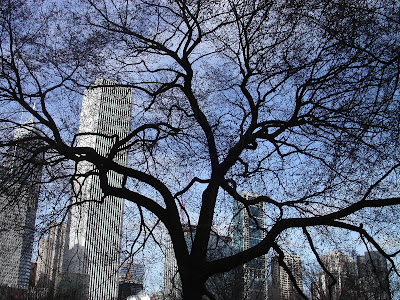 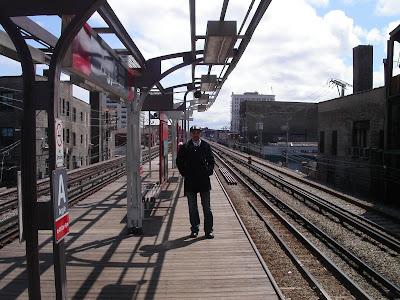 We spent much of our time on the weekend of April 12-13 exploring the gay-friendly neighborhoods of the Edgewater area, such as Andersonville, and, of course, the first recognized “gay village” in the U.S., the Lakeview neighborhood enclave known as Boystown.

I was particularly impressed by the Center on Halsted, a recently established community and resource center that, as a “safe and nurturing environment,” serves the LGBT community’s “diverse social, recreational, cultural, and social service needs.” 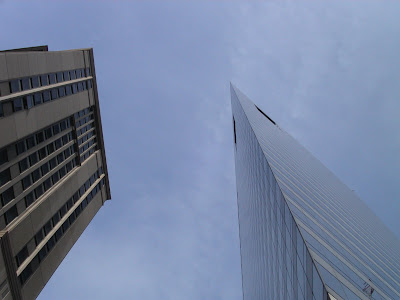 Above and below: Eduard and I both enjoyed walking through city streets and neighborhoods, looking out for unusual examples of architecture. As I was taking the photograph above, a woman walking by stopped and told us that the building on the right was inspired by Japanese folklore and thus traditional architecture. Accordingly, the square opening at the top of this particular building is intended to allow evil spirits to pass through the building, as opposed to making their home in it! 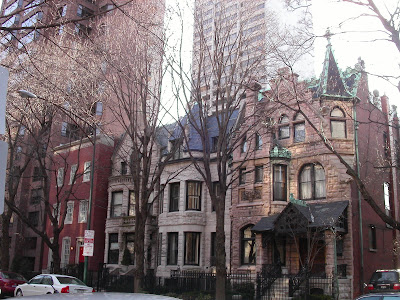 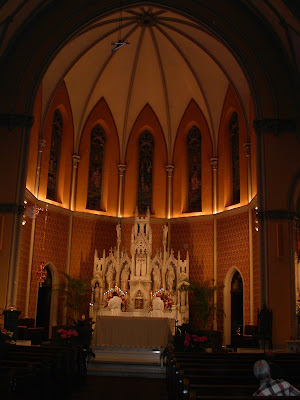 Above: The beautiful interior of Our Lady of Mount Carmel Roman Catholic Church, host parish of AGLO, the Archdiocesan Gay and Lesbian Outreach program of Chicago.

Eduard (left) and I attended the weekly AGLO mass at Our Lady of Mount Carmel on Sunday evening, April 12. There was well over 100 LGBT Catholics in attendance.

AGLO Chicago is a supra-parochial organization that was founded in 1988 to extend the Church’s pastoral outreach to gay and lesbian Catholics throughout the Archdiocese of Chicago. The late Cardinal Bernardin helped draft the organization’s mission statement, which reads:

We, the members of the Archdiocese Gay and Lesbian Outreach, as people of God, create a sense of community for those who wish to reconcile their sexual orientation with their faith; provide an accepting and affirming atmosphere in which to worship in the Catholic tradition; provide opportunities for integration of personal experience through spiritual growth; share our distinctive gifts with each other and the Church at large, and witness our Catholic faith to the gay and lesbian community.

It was great to attend a Catholic mass in which gay couples felt free to show signs of affection. I observed, for instance, a number of couples holding hands at different times during the mass. It was also refreshing to hear the words “gay” and “lesbian” spoken by the priest, as opposed to that ghastly expression that some within the institutional church are fixated on: “persons with same-sex attractions.”

Afterwards, Eduard and I joined with members of AGLO for a social hour in the parish center. Here I talked with AGLO co-director Mike Cunningham about the mission and history of the organization. I was curious to ascertain how AGLO was able to continue to meet on church property, to learn more about its relationship with the local Dignity chapter, to discern points of similarities between AGLO and the organization I work for, CPCSM, and to discover if AGLO’s educational and outreach initiatives were in any way compromised by its close association with the institutional church. It was a very interesting conversation. 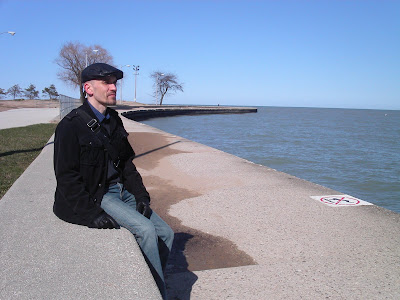 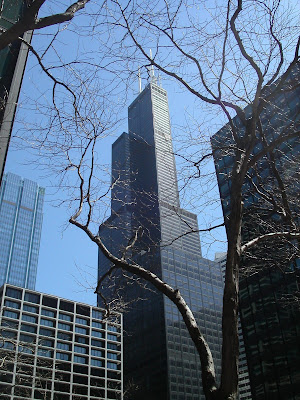 Above: The Sears Tower, which, at one time, was the tallest building in the world. 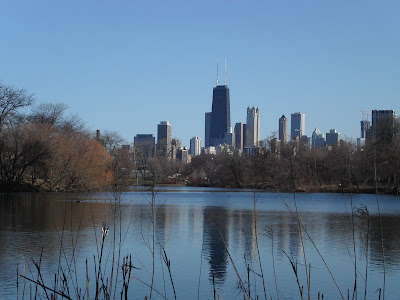 Above: Downtown Chicago as viewed from Lincoln Park. 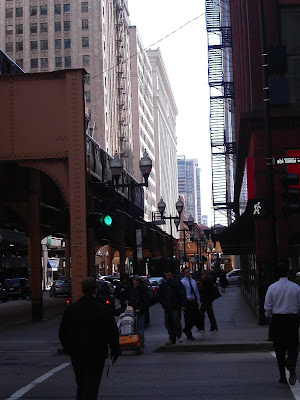 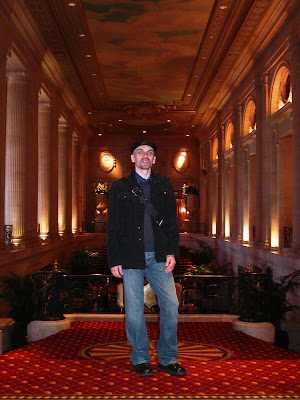 Above: Eduard and the opulent interior of Chicago's Drake Hotel. 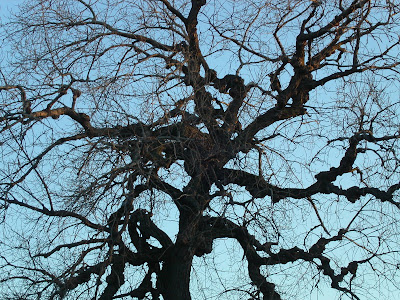 Above: Twisted beauty in the Chicago neighborhood of Lincoln Square. 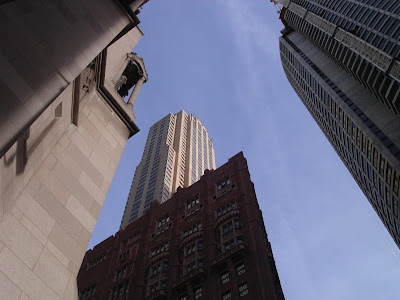 Michael, glad you had a memorable time in my city. It is truly wonderful, architecturally, historically, culturally, and socially, and religiously. You can probably understand how Chicago Catholics have never "jived" with the ultramontanist wings of the Church. It has never been a "fit" for us, and never will be. If you could read the notes of presbyteral council meetings with the cardinal you would further appreciate how the clergy in Chicago have continuous "frank and open" dialogue with their shepherd. It is not always "pretty and neat," but there is a dynamism and a life that are unequalled anywhere else in the U.S. Church.

I'm so sorry I didn't know that you're in Chicago! It would have been great to have met you. I've long appreciated the informed perspective you regular share on The Wild Reed, and believe you'd be a person worth getting to know. Perhaps next time I'm in Chicago we could meet over coffee or a meal?

Are you an active member of AGLO?