One Catholic Gay Parent Who Isn’t Leaving the Church 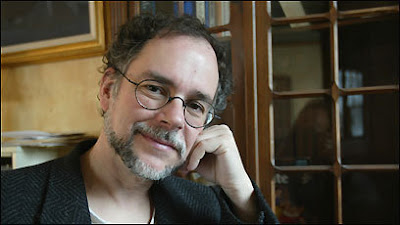 One of the many inspiring speakers I heard speak last year at New Ways Ministry’s Sixth National Symposium on Catholicism and Homosexuality was author Gregory Maguire (pictured above).

Maguire, perhaps best known for the popular novel Wicked: The Life and Times of the Wicked Witch of the West (which has been adapted into a Tony Award-winning musical), spoke at the March 16-18, 2007 symposium on the topic of “Gay Parenting in a Sacramental Church.”

Just prior to his speaking at the New Ways’ symposium, Maguire was interviewed by Chuck Colbert of the National Catholic Reporter (NCR). Colbert’s article about Maguire, entitled “Gay, Catholic, and Parent of Three,” was subsequently published in the March 23, 2007 issue of the NCR.

Following are excerpts from Colbert’s article about Gregory Maguire’s life as a married gay man and parent of three, and his reasons for remaining in the Catholic Church.

[Gregory] Maguire and his partner, artist Andy Newman, are not only a gay couple raising children, but they are legally married under a new law in Massachusetts, the only state with equal marriage rights for lesbians and gay men. . . .

All three [of their] children – two boys and a girl, ages 5, 6 and 9 – were adopted from countries in Latin America and Southeast Asia. They are by Maguire’s account “noisy, smart and obedient within a range,” having settled comfortably into an all-American way of life, with interests varying from ballet and piano to soccer and computer games. They are well-liked by their friends, Maguire said, adding, “We have yet to hear or face in nine years living in Concord any resistance to us as a gay couple with a family.”

The Maguire and Newman clan is part of a changing landscape of contemporary American family life. More than 8,500 same-sex couples have married in Massachusetts since May 2004, including many with children. Nationwide, estimates of lesbian and gay parents range from 2 million to 8 million.

But a political battle to roll back civil-marriage rights for gays looms. Massachusetts state lawmakers have voted to send a proposed constitutional same-sex marriage ban to voters. If the legislature approves the measure again, this year or next, voters would have the final say in November 2008.

The local church has been an active player, with the Boston Cardinal Sean O’Malley and other local bishops lobbying lawmakers to restore a traditional definition of marriage.

Maguire and Newman are doing their part to prevent that from happening. Last year they testified at legislative hearings against the ban. This year they will host a fundraiser for MassEquality.org, a statewide organization dedicated to protecting same-sex marriage. The couple has joined thousands of others across the state who have signed an online statement for Roman Catholics supporting the civil marriage rights of same-sex couples.

Despite pronouncements from Rome and Boston, Maguire, a cradle Catholic, remains devout. Newman is a convert. Together, they are instilling in their children the basics of Catholicism. All three have been christened. The oldest has received first Communion. The family begins every meal by saying grace. The children know the Our Father, Hail Mary and the rosary. A cross hangs by the front door. “We are a Catholic family,” Maguire said. “We go to church on a regular basis, are respected in our parish, and are healthy contributors financially and morally.”

In an interview with NCR, Maguire extended an invitation for Pope Benedict XVI to share a meal and meet the family. He would like the pope to see “we’re teaching by example how we must take care of each other, love each other,” he said. “That is the heart of the Christian message.”

Locally, many gay Catholics, as well as supportive clergy, hope for dialogue. A group of more than 700 interfaith clergy, the Religious Coalition for the Freedom to Marry, has asked for a meeting to discuss a civil marriage with O’Malley. The clergy wish to explain more fully a key distinction between civil and religious marriage and how a gay-marriage ban will discriminate against the religious liberties of gay people. But so far the chancery has not responded to the request.

“The hope is that the conversation occurs among the people in the pews,” Maguire said. “If we can’t get the message to the clergy that discrimination will not be tolerated, the people will go around” the leadership, and the “clergy will play catch-up.”

A recent poll from Decision Research shows that a majority of Catholics in Massachusetts – 53 percent – favor same-sex civil marriage.

Raised in an orphanage by priests and nuns, as well as by a Catholic family, Maguire attended parochial schools in upstate New York. “The fact that I grew up as a Catholic, part of my system of thinking – the grammar of how I frame the moral questions is Catholic grammar,” Maguire said. “I have the great blessing and good fortune of finding myself during formative years in a very progressive church that was always eager to ask the next question rather than provide the next answer.” And Maguire explained, “A parent’s first obligation is to speak to his children with the most authentic language he has. For me, that is Catholicism.”

His “intellectual and spiritual training” to “question, but not necessarily conclude,” he considers a “birthright” and “inheritance.”

“So I don’t feel as much of a disjuncture as many people do,” he said, “because when I sit in the pew and hear a letter from a bishop, or an injunction even from the pope about gay parents doing damage to children, I just say: Well, he has not asked the right question – hasn’t asked Andy and me, ‘Why are you making so many sacrifices to take care of these orphans?’ ”

The tangible benefits and social status of marriage – its legal, public and moral commitments – also helps, Maguire explained. “We are able to say to our children honorably that we are married.” Among all the differences they embody, “being brown-skinned, adopted and from foreign countries, at least they don’t have to deal with that difference. Their parents are as married as any others.”

Nonetheless, remaining in the church, Maguire acknowledges, is a struggle. “I run the great risk of being misunderstood or dismissed,” he said. A declaration from the Vatican in 2003 that gay parents do “violence” by raising children caused us “grave distress,” Maguire added.

But he explained, to “leave the church over what it’s saying, I would have to pluck out my eyes because I don’t like what I am seeing.” For Maguire, that action would be tantamount to spiritual suicide, he said. “I would far rather be brave and sit in the pew” and “with a fair amount of respect, be the Rosa Parks of the situation. I am not moving. I didn’t move before, and I’m not moving now.”

It is so nice to read Maguire's reflections. They are an inspiration to us gay persons. His integration is tangibly felt in the peacefulness that comes across in his statements. He is a model. He respects the magisterium of the Church, has listened with his heart and discerned a moral and proper stance for himself in conscience.
Bravo!