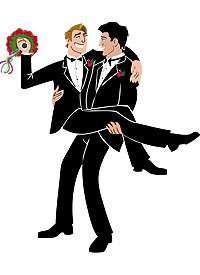 In other words, its editorial content is put together almost exclusively to support each issue’s advertising content. There’s precious little real journalism.

There for a while

Vanessa Sheridan’s column was the only reason I ever picked up Lavender. She was one writer who wasn’t afraid to discuss broader issues, such as the decline of democracy in the U.S., the rise of religious fundamentalism, and the dangers of unfettered capitalism. But now that her column has been dropped (with no explanation, to my knowledge) I can’t be bothered with Lavender.

Mind you, the cover of the latest issue caught my eye – featuring, as it does, the cute graphic above. As you’ve probably gathered, this particular issue is all about the wedding industry and how it’s increasingly catering to gay folks wanting to “tie the knot.”

Fear not, I’m not about to write on this industry. (I’m all for much simpler wedding ceremonies, anyway!)

Instead, I’ll simply use this post (and Lavender’s graphic) to bring to your attention a number of past Wild Reed posts that focus on the topic of same-gender marriage. Enjoy!

As I've written, I support "marriage equality" solely for justice, not for its merits. If the state chooses to afford rights and responsibilities in the married state, then the married state should be equally protected under the law for everyone.

I fully concur with Walter Lippmann's assessment in 1928, who believed "marriage" as a state-sanction institution had little to recommend it, other than as connecting offspring to parents. With the advent of birth control, serial marriages, 50% divorce rates, little recommends marriage to homophiles, unless they are raising children. Yes, tax benefits accrue, but they come with a price tage, and most benefits gay couples seek can be done "contractually" without the state's supervenience. Indeed, the process itself helps a gay couple understand their bond far better than rely on state assumptions and requirements that take the couple's uniqueness and flattens it to "one product."

As several activists have noted, over 3/4ths of the states now have banned same-sex marriage, a sufficient number to have implemented the Bush Amendment de facto. The probability that the federal government will supersede states' rights is negligible.

Given those factors, I call upon our principal organizations, like NGLTF, to produce sample documents to achieve the "contracts" I mentioned. Each sample can be renegotiated by the couple, but more importantly, provide for one's beloved and oneself in those "situations" we often encounter. Michael Hamar's blog frequently cites some of the documents that he as an attorney recommends.

Finally, "civil unions" and "domestic partnerships" do more to give the state jurisdiction over your rights as a couple than provide the incentives to do so. Unless tax structures change, too, all these substitutions and inferior "products" are often a greater liability than asset.