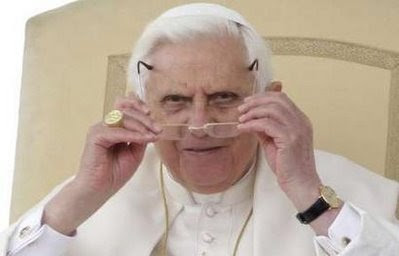 Ahead of next week’s visit to the U.S. by Pope Benedict XVI, the Associated Press has released an interesting article about the “diverse church” that the pope will experience while Stateside.

As you’ll see from the following excerpts, this article is filled with all manner of insightful statistics and observations about the state of the Roman Catholic Church in the U.S.

Pope Will Find Diverse Church in U.S.
By Rachel Zoll
Associated Press Religion Writer
April 5, 2008
In his visit this month to the United States, Pope Benedict XVI will find an American flock wrestling with what it means to be Roman Catholic.

The younger generation considers religion important, but doesn’t equate faith with going to church. Many lay people want a greater say in how their parishes operate, yet today’s seminarians hope to restore the traditional role and authority of priests.

Catholic colleges and universities are trying to balance their religious identity with free expression, catching grief from liberals and conservatives in the process.

Immigrants are filling the pews, while whites are leaving them. Nearly one-third of U.S. adult Catholics are now Hispanic, and they worry about being considered a separate, ethnic church.

. . . Benedict has traveled to seven other countries since he was elected in 2005, but a papal journey to the U.S. is like no other because of the church’s size and influence.

In a nation founded by Protestants, Catholics comprise nearly one-quarter of the population. Catholic America is the biggest donor to the Vatican. The U.S. also is home to more than 250 Catholic colleges and universities.

There’s an added urgency to this visit. While it will be Benedict’s first trip to the country as pope — he made five visits when he was Cardinal Joseph Ratzinger — it may also be his last. He turns 81 during his April 15-20 visit to Washington and New York, and he has less interest in travel than his globe-trotting predecessor, Pope John Paul II.

Americans don't know much about Benedict. But surveys conducted ahead of his visit found three-quarters of U.S. Catholics view him favorably. They are clamoring to see him.

. . . They have less enthusiasm for religious observance. About one-third of the more than 64 million U.S. Catholics never attend Mass, and about one-quarter attend only a few times a year, according to a 2007 study by the Center for Research in the Apostolate at Georgetown University. A majority never go to confession or go less than once a year.

The generational split is stark: About half of Catholics born before the 1960s say they attend Mass at least once a week, compared to only 10 percent of those born since the 1980s.

One of Benedict’s core goals is strengthening Catholic culture to combat these trends, stressing the importance of religious life, and observing Holy Communion and other sacraments.

Older Catholics who remember the Second Vatican Council of the 1960s are still debating its modernizing reforms. The council changed everything from the role of lay people to the direction priests face while celebrating Mass.

Benedict has revived some traditions and prayers that had been largely abandoned since Vatican II, refueling the debate.

But young adult Catholics are fed up with the fight, according to James Davidson, a Purdue University sociologist of religion who studies American Catholics.

“They’ve become very impatient, and probably rightly so, with older generations, who see everything in terms of conservative-liberal, liberal-conservative, who they see as sometimes enjoying the ideological battle, even if it doesn’t get them anywhere,” Davidson said. “Problems aren’t being solved, but people are yelling at one another.”

To read Rachel Zoll’s article in its entirety, click here.

See also the previous Wild Reed posts:
A Church That Can and Cannot Change
Agreeing with the Vatican
Uta Ranke-Heinemann on the Future of the Catholic Church
Listen Up, Papa!
What it Means to be Catholic
The Two-Sided Catholic Crisis
Crisis? What Crisis?
The “Underground Church”