Archbishop Nienstedt Has It Wrong 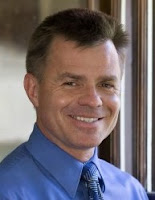 Earlier today I called Kevin Winge (pictured at right), executive director of Open Arms of Minnesota, and thanked him for his excellent response to Archbishop Nienstedt, published on Saturday in the Star Tribune’s “Your Voices” online forum.

Kevin’s response in reprinted in its entirety below.

Archbishop Has It Wrong

Too often, the rhetoric of people with power and privilege goes unchallenged. This can be especially true if the authority figure is a religious leader. Followers assume if a faith leader makes a statement, it must be true. But just because the archbishop of the Archdiocese of St. Paul and Minneapolis pens an opinion piece for the Star Tribune calling for a constitutional amendment in Minnesota to outlaw gay marriage (“Let’s Protect the Meaning of Marriage,” April 28, 2010), that doesn’t make him right.

Rev. John Nienstedt, in his op-ed piece, makes broad generalizations that aren’t substantiated. He states it’s “. . . common-sense wisdom that children need a mom and a dad working together to protect them.” Yes, children need protection (more on that later), but it is not gender that provides that protection – it’s a nurturing and loving parent, or parents, of any gender or sexual orientation, that makes for good parents.

The archbishop writes that, “Defining marriage as simply a union of consenting parties will change the core meaning of marriage. . .” How will that happen, Rev. Nienstedt? How will extending same-sex couples with the same rights and responsibilities that come with marriage change its “core meaning?” Has heterosexual marriage changed in Iowa since gays and lesbians have been allowed to legally marry?

“Marriage,” Rev. Nienstedt says, “exists in civil law primarily in order to provide communal support for bringing mothers and fathers together to care for their children. Same-sex unions cannot serve this public purpose.” Heterosexual couples who can’t have children, don’t want children, or marry after child-bearing years might disagree with the archbishop on this one. But what in the world does Rev. Nienstedt mean that “same-sex unions cannot serve this public purpose?” One reason that many same-sex couples want the legal right to marry is for this very reason: “to provide communal support” for their children. And yes, gays and lesbians have children, too.

Rev. Nienstedt makes the case that marriage is one way to protect children. It can be, both for straight and gay people, but there are others ways to do that. Instead of advocating for Minnesotans to vote on a marriage amendment, the archbishop might want to acknowledge the Catholic Church’s lapses in protecting children from sexual abuse and ensure that protections are in place for future generations. That is something that would actually protect children and families. That is the opinion piece that should have been written.

A native of Minnesota, Kevin Winge has lived in New York, Boston, and Cape Town, South Africa. He is the executive director of Open Arms of Minnesota, a non-profit organization that provides nutritious meals to people living with diseases.

Following are a few of the comments that have been left online in response to Kevin’s op-ed.

jjfrey writes: Reeling from the never ending problems of the church violating the very children they profess to protect, you may think that Nienstedt would keep his mouth shut on hot social issues. . . . His logic with this argument is flawed and he is simply pandering to an ever shrinking group of ultra-conservatives who like the world the way it used to be – white men in charge, women subservient and children silent. His ignorance and the bias he spews is embarrassing and enlarges the schism which continues to divide an already fractured church.

Andymogendor writes: The archbishop’s editorial was, in my opinion, one of the more ignorant and offensive pieces of writing I have seen in the Star Tribune. There are several kids in my first-grade son’s classes at school who have same-sex parents. These kids are doing great with their caring, compassionate and supportive parents, who in many ways could be seen as role models for a number of the heterosexual parents at the school, and it has done nothing to undermine our son’s experience of his parents, and certainly hasn’t made my wife and me feel that our parenting or marriage is undermined. On the other hand you could argue that people in positions of authority who write nonsense are a much greater threat to our son’s sense of fairness, honesty and integrity.

Leakyboats writes: Regardless of one’s opinion of gay marriage, it seems reasonable to ask – why is Nienstedt talking about this now? There is no time left in the legislative session. Even if time was available, this would not pass. Plus, are there not much more pressing “issues” for Nienstedt to address? Perhaps he should speak out against the foolishness of using tax money to build a stadium when we cannot even afford to provide health care access to the poor. There are two types of Christians, it would seem. The “Thou shalt not” types who love to point our everyone else’s deficiencies and tell us what we should or shouldn’t do. On the other hand, there are the “Love your neighbor” types who are more interested in making the world a better place by helping those who are in need. Nienstedt clearly favors the former and seems to have little time for the latter.

This is a very good article. Thanks for sharing it.