I dreamt last night that I was singing the following song in an open field – for all the world to hear! Weird or what?

I'm not sure why this particular song - a longtime favorite of mine – should visit me in my dreams, though I can definitely relate to some of its lyrics. Mind you, I'm not experiencing a doomed affair with a Russian chess player - or anyone else for that matter. Oh, and neither was I sporting big hair and '80s attire in my dream!


. . . No one in your life is with you constantly.
No one is completely on your side.
And though I move my world to be with him,
still the gap between us is too wide.

Looking back I could
have played it differently.
Learned about the man
before I fell.

But I was ever so much
younger then.
Now at least
I know I know him well.

Didn't I know
how it would go?
If I knew from the start,
why am I falling apart?

But in the end he needs a
little bit more than me –
more security.
He needs his
fantasy and freedom.

I know him so well. 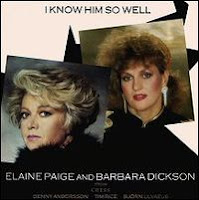 The song is, of course, "I Know Him So Well," from the musical Chess. In the clip above, it's being sung by Elaine Paige and Barbara Dickson. It was a worldwide hit in 1985.

Notes Wikipedia about the song:

In this duet, two women – Svetlana, [a] Russian chess champion's estranged wife, and Florence, his mistress – express their bittersweet feelings for him and at seeing their relationships fall apart.

The duet was number one in the UK for four weeks in 1985 when released as a single by Elaine Paige (as Florence) and Barbara Dickson (as Svetlana), who laid down their vocals separately and never met during the recording of the song, only for the video and subsequent performances on Top of the Pops and the European tours. This recording remains in the Guinness Book of Records as the biggest selling UK Chart single ever by a female duo. Paige also appeared in the original London stage production of Chess.


I've always liked "I Know Him So Well," and bought it as a single when it was first released in Australia in 1985. I was in my second year of college at the time. I heard it again recently as I've been playing an old compilation tape of '80s songs when I work out. Perhaps that's why it was a recent "dream song."

Anyway, following is a beautiful 2008 performance of the song by John Barrowman and Daniel Boys - two openly gay British singers.


Looking back,
I could have played things
some other way.

I was just a little
careless, maybe.

Now at least
I know him well.

Thanks for this. I just yesterday searched through my own blog for the post where I included John Barrowman singing "I am what I am" from La Cage aux Folles.
It followed some sadness after seeing the film "A Single man" and wishing I could have grown up in an era when gay people can be open and still have successful careers as singers, actors, lawyers and even Episcopal bishops.

What a cool dream, Michael. That is neat. I never heard of this song before so it was nice to watch the clips. I don't recall dreaming about singing but I go around the house singing sometimes.