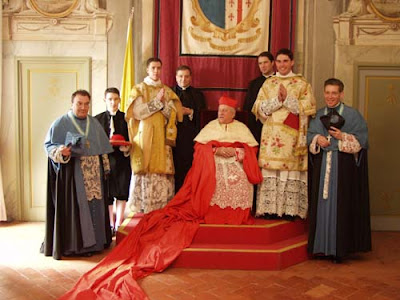 The following editorial from the April 30 issue of the National Catholic Reporter is one of the best commentaries I’ve read on Roman Catholicism’s ongoing clergy sex abuse crisis – a crisis which, as the editorial states from the get-go, is “not fundamentally about sex . . . [but about] power and authority and how it is used in the church.” It’s definitely a must-read!

The sex abuse crisis is not fundamentally about sex. The phrase is a convenient tag that has been applied to a deeper, ongoing problem that, at its core, has to do with power and authority and how it is used in the church.

The sex abuse crisis is actually a hierarchy crisis, it is a crisis of a culture that can no longer maintain its superiority by dint of office or by claim of some ontological difference from the rest of humankind. The overwhelming evidence shows that from parish priest to pope, those charged with protecting the community, on hearing that children were being sexually abused, acted first to protect the institutional church.

A central, sad truth runs through the story that has been unraveling for the past 25 years: When the community most needed its leaders to act as pastors they chose instead to act as princes, ignoring the problem all around them while employing every means available to spare the realm.

Church leaders have suggested an array of defenses. Most of them point to influences outside the clerical culture, to secularism, materialism, relativism, an oversexed society, hostile media, anti-Catholic lawyers, the reforms of the Second Vatican Council, and most absurd of all, the defense that what occurred in the church is being unduly highlighted since abuse of children occurs in every sector of society.

Surely some among the hierarchy must be figuring out by now that their response to the crisis is steeped in the very secularism and relativism that they condemn. Who among the bishops would stand in a pulpit and admonish a congregation to follow their example in dealing with serious sin: deny, attack the accuser, hide the crime, pay for silence if discovered, and admit “mistakes were made” only when public pressure makes disclosure inevitable?

One need not look outside the confines of the community for causes. It is beyond dispute now, as reporting of the crisis spreads worldwide, that the bishops used the secrecy of their privileged culture, the trust that those within the church and even the wider society conferred on them, as well as the labyrinthine and hidden protocols of their culture to shuffle offending priests and to avoid scrutiny by civil authorities.

The bishops’ strategy grew out of a model of governance owing more to the concept of royalty and to court behavior than to the demands of the Gospel. The royal model admits no wrong, requires absolute loyalty and is accountable to no one. Compassion has little place in the prince’s world.

History shows, however, that kings and princes have a difficult time of it when the subjects become educated and understand that they have a right to know what’s going on, to be part of the governing process and to demand accountability of those in charge.

The ecclesial empire no longer functions well because the people who do its work and project its message into the world no longer trust that their leaders will, perforce, do the right thing. It doesn’t work because the 21st century demands accountability of its institutions and leaders.

The fact that the crisis seems unending and in this latest round of reporting reaches to the papal apartment should come as no surprise given the Vatican’s record during the last papacy.

No better example exists of the corruption that extended to the highest levels of the church than the late Fr. Marciel Maciel Degollado, founder of the secretive order called the Legionaries of Christ.

In recent weeks NCR has documented some of the seamier elements of Maciel’s rise to power, a rise fueled by lavish gifts and an endless stream of cash for powerful figures in the curia. The late Pope John Paul II exemplified the blindness of the clerical culture, refusing for most of his long papal reign to acknowledge the persistent cries of abuse victims throughout the world. His action in the Maciel case was especially unfortunate. He aborted a Vatican investigation of Maciel, despite abundant warnings from a host of credible sources that Maciel had repeatedly sexually abused young seminarians in his charge. Instead, John Paul hailed Maciel as an “efficacious guide to youth” and bestowed special honors on the Legion. All the while, Maciel was making a mockery of the church and everything it should stand for, even as he manipulated the curia to his own ends.

Archbishop Diarmuid Martin of Dublin, Ireland, after reading the documentation assembled as part of an Irish government investigation of sexual abuse by priests in his archdiocese, predicted that we would become “a humbler church.” Martin arrives as a fresh voice, unencumbered by any involvement in the scandal. So far he has rendered a sober and honest assessment of the crisis and its causes. Perhaps Ireland, so thoroughly Catholic and so deeply shaken by the scandals there, could be the place where a new ecclesiology surfaces, one that is more inclusive and transparent than the royal model that is in decline. Perhaps it could be the birthplace of an ecclesiology that is humbler, not in a humiliated way, but in a way that takes stock of what a Christian community should be and how it should be present to the world.

Perhaps it could provide an example of the kind of serious and deep introspection that will be required of the clergy, especially the hierarchy, to get to the root causes of the scandalous behavior of the clergy culture and to discern what reforms are necessary to make it a culture of service and compassion.

Catholics want to walk with their leaders, not beneath them. We want to be deeply invested in the pilgrim’s search, not sent on a forced march. We want to be the people of God, not cowed serfs.

We want our pastors back. We’ve had quite enough of princes. 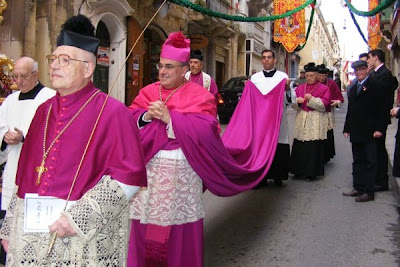 See also the previous Wild Reed posts:
Beyond Papalism
Re-Forming “the Vatican” Doesn’t Mean Destroying the Church
An Offering of Ashes
The Roman Catholic Pyramid is Crumbling
Rome Falling
Eugene Kennedy on Roman Catholicism’s “Post-Hierarchical Blues”
The Holarichal Church: Not a Pyramid but a Web of Relationships
Roger Haight on the Church We Need

The Cappa Magna is the epitome of the totally absurdist position of our hierarchs.

What an odd picture. I read this article the other day on NCR's site. It really hit the mark. I am also in a discussion about Father Maciel. What a horrible man. It is amazing that the Vatican continued to back him for so long because he brought in a lot of money.