Dale Carpenter on the "Win-Win" Reality of Gay Marriage

Even though I find myself in disagreement with him, I’m glad Archbishop Niestedt shared his thoughts on gay marriage in a recent Star Tribune op-ed. This is because in response to it, a number of well-reasoned and insightful counter-opinions have been written and published. Many people have been given the opportunity to be enlightened by the perspectives contained in these commentaries - something that would not have happened if the archbishop's piece had not first been published. Initially, there was my friend Ed Flahavan’s April 30 letter to the editor, followed by commentaries by Kevin Winge, Andy Birkey, and Eileen Scallen. 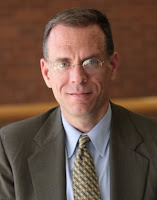 We can now add to this impressive list the May 9 Star Tribune op-ed by Dale Carpenter, professor of Civil Rights and Civil Liberties Law at the University of Minnesota Law School.

It’s an excellent op-ed – one that offers sound reasons for why we should question and oppose the archbishop’s efforts to ban gay marriage in Minnesota. I sincerely hope that Archbishop Nienstedt takes to time to reflect upon and, in some way, respond to Carpenter’s arguments – the central one being that marriage is “good for married people, good for kids and good for society” and that therefore the rights and protections of civil marriage should be afforded to same-sex couples and families. It’s a stance that reminds me of what was shared in the previous Wild Reed post, An Ironic Truth.

Like many others, Carpenter recognizes and critiques the illogic of the archbishop’s op-ed. He notes, for instance, that:

Nienstedt has identified longstanding problems in heterosexual families that were not caused by gay families and has proposed to alleviate them at the expense of gay families.

Carpenter, it should be noted, is a conservative gay man – a Republican, actually. I was first introduced to him via his writings at the Independent Gay Forum. I highlighted his response to British gay rights pioneer Peter Tatchell in The Wild Reed’s Summer Round-Up of 2009. Part of Carpenter’s response to Tatchell reads as follows:

And, yes, we want marriage. Marriage is not a “patriarchal prison” for our partners and children. It is freedom from a queer prison of perpetual grievance and mythologized otherness. It is getting off the tiger’s back of adolescence and accepting responsibilities for families and communities. 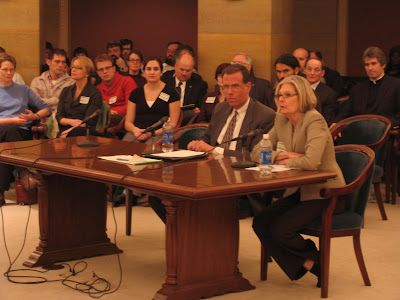 In February and March of this year I had the pleasure and honor of meeting Dale when I attended hearings at the Minnesota State Capitol on a number of marriage equality bills currently before both the Minnesota House of Representatives and the Minnesota Senate. Dale was one of those who testified at both hearings in support of the bills. At one point in his testimony he observed that:

Because I’m a conservative, I support the recognition of same-sex marriage in Minnesota. It’s good for stable relationships, good for families, and good for kids.

Later in March, Dale attended the Oscar Night Party I hosted at my home in St. Paul. I appreciated the chance to converse with him in an informal social setting, and learn more about his background and his perspective on various issues.

His May 9 Star Tribune op-ed is reprinted in its entirety below.

The archbishop's fears about damage
to families and children are misdirected.

Marriage is good for married people, good for kids and good for society. Public policy should support and reinforce it. On these important points, Archbishop John C. Nienstedt is surely correct (“Let’s Protect the Meaning of Marriage," April 28). To help sustain families and to protect marriage, however, we should do the opposite of what he suggests. We should let gay couples wed.

There are about 150,000 gay or lesbian Minnesotans. The 2000 census revealed that there are about 9,000 same-sex unmarried-partner households in the state. Whether by adoption or biology, thousands of children here are being raised by gay parents. Minnesota is also one of about half the states where it is possible for a same-sex partner to share full legal responsibility with the biological parent.

The state encourages the formation of gay families. Yet when it comes to protecting these families in the law, Minnesota treats them as worthless. It makes no provision for them.

Marriage offers families irreplaceable legal, care-giving and social support. Law confers rights and imposes obligations on married people in ways often designed to sustain them in times of crisis. It also encourages spouses to commit to each other. It makes them think twice about splitting up. Children are more secure in households where their parents are married.

The welfare of gay persons and their children is a material and moral concern for every humane and civilized citizen. What is Nienstedt’s proposal for dealing with them? So far, he has just one: Retrieve from the dust bin a failed constitutional amendment excluding them from marriage.

Nienstedt worries about fathers’ avoiding parental responsibility, about the unfairness and poverty of single parenthood, and about high divorce rates. Highlighting these problems would make sense if one were proposing, say, to abolish divorce, which affirms that some values are more important than keeping people married at all costs. Banning gay marriage addresses none of them.

If Nienstedt is concerned about single parenthood, he should support same-sex marriage. Prohibiting it guarantees single-parent homes for thousands of children.

Nienstedt is also distressed, more abstractly, that gay marriage would signal that “we have officially abandoned the ideal that children need both a mom and a dad.” But why should anyone believe that their own family is unimportant because the law recognizes someone else’s?

This concern might make sense if one were proposing to eliminate adoption or remarriage, both of which separate biological parenthood from marriage. Gay marriage will not take a single child away from biological parents who want to raise their child and are fit to do so.

In other words, Nienstedt has identified longstanding problems in heterosexual families that were not caused by gay families and has proposed to alleviate them at the expense of gay families.

Banning gay marriage carries its own risks to marriage, including the creation of alternatives designed to replace it. Another danger is the lamentable but growing perception, especially among younger people, that marriage is just one more example of unjustified discrimination against their gay friends.

We should always be cautious about changes to important institutions. No-fault divorce really did transform marriage, because it altered the rules by which 100 percent of married couples lived. Gay marriage, by contrast, will add perhaps 3 percent to the total number of marriages. While it is important for same-sex couples, it will change no rules for entering, conducting or exiting marriage by the other 97 percent.

Minnesota should follow the lead of the 15 states covering about a fourth of the U.S. population, along with more than two dozen countries, that have already recognized same-sex relationships. Five states and seven countries now have full gay marriage. None of the ill effects hypothesized by Nienstedt has come true. And this change is increasingly coming through legislatures, not courts.

Gay marriage is one of those rare reforms in which every affected person is a winner and none is a loser. It’s win-win.

Dale Carpenter is the Earl R. Larson Professor of Civil Rights and Civil Liberties Law at the University of Minnesota Law School.