Here's another great song by the beautiful and talented Wendy Matthews. (It's actually by the short-lived Australian band Absent Friends, with Wendy on vocals.) Notes Wikipedia:

[The Absent Friends'] single "I Don’t Want To Be With Nobody But You" was a significant commercial success. It was a cover of the Eddie Floyd classic. The cover to the single credited the song to Absent Friends featuring Wendy Matthews. Also guesting on the track was vocalist Peter Blakeley (backing vocals). The song peaked at Number 4 on the Australian charts during July 1990, and later won the ARIA Award for ‘Best Single’ for 1991.

As often is the case when I choose songs to share on The Wild Reed, the lyrics of this one kinda reflect things I'm currently going through in my life. I guess that's to be expected.

Anyway, regardless of its relevance to your life or mine, I think you'll find "I Don't Want to Be With Nobody But You" a great song that's beautifully delivered by Wendy Matthews. Enjoy!

. . . Man, I love you, so put an end to your fantasy,
or you just might, you just might blow it all.
Get yourself together and, baby,
when you do, you're going to see
I'll be true to you. 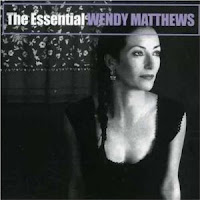 "I Don't Want To Be With Nobody But You" is available on the following albums: Stepping Stones: The Best of Wendy Matthews (1999) and The Essential Wendy Matthews (2007).

Thank you for sharing this beautiful song, Michael. I also have to say that I was very touched by your comments. You are such a romantic with a beautiful soul. Peace, blessings and hugs to you. Mark