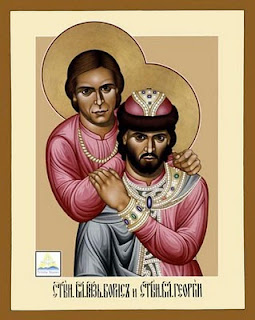 I think it's wonderful that on this first day of legalized civil marriage for same-sex couples in New York the Christian church celebrates the feast of St. Boris, a man who, along with his trusted companion George the Hungarian, many LGBT Christians claim as their own.

The beautiful icon of Boris and George at right is by Br. Robert Lentz, OFM. I have a version of it in the form of a card, and use it as a bookmark in my copy of Volume 2 of The People's Companion to the Breviary. Following (with added links and images) is "artist narrative" that accompanies his icon.


One of the earliest works from the literature of Medieval Rus' is The Legend of Boris and Gleb, which forms a portion of The Primacy Chronicle, a document compiled by various writers from about 1040 to 1118. The legend concerns a tragedy, occurring in 1015, of which the death of St. Olga's grandson, St. Vladimir, was a catalyst. This extraordinary prince had founded the state of Rus' and compelled his people into mass conversions to Christianity. Shortly after his death, two of his sons, the Kievan princes Boris and Gleb were assassinated for dynastic purposes by minions of their half-brother Sviatopolk, called "the Accursed" because of the deed.

The older brother, Boris, had a servant named George the Hungarian, whom Boris had given a magnificent gold necklace, "for he was loved by Boris, declaring 'I will not be left behind, my precious lord! Before the beauty of your body begins to wilt, let it be granted that my life may end." The assassins tore Boris out of George's embrace, stabbed George, and flung him out of the tent, bleeding and dying. Then they murdered Boris, who died forgiving them for their crime. Unable to undo the clasp of George's necklace, they cut off his head, flinging it so far away that, the narrator adds indignantly, his head and body could not later be reunited for decent Christian burial. Shortly afterwards, another group of assassins tracked down Gleb, the younger brother of Boris, who had been warned of his brother's death and was about to flee half-heartedly. He had been so attached to Boris that he yearned to join him in death. when ordered to murder Gleb, they balked at killing a son of Vladimir, so terrified his cook into doing it. 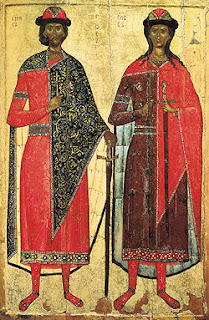 Since Boris and Gleb [pictured at left] both were said to have died accepting their fate and forgiving their murderers, they became the first saints canonized by the Russian Orthodox Church and were given a title especially coined to explain the saintliness of two men who, up to the time of their death, had not demonstrated any notably holy characteristics at all. They were called "Passion Bearers." The Roman Church acknowledged their cult in 1724 and assigned them a feast day of July 24th, the date on which Boris and George died.

A boy, whose cure was recorded as part of the brothers' canonization process claimed that, at the time of his cure, he had experienced a vision in which George appeared in their company. Nevertheless, even though his death was a perfect icon of Jesus' observance that "A man can have no greater love than to lay down his life for his friends" (John 15:13), George was never canonized. Probably because of a subsequent embarrassment over his intimate relationship with Boris, the most Medieval iconographers would do for George was to include him among the characters depicted in miniature scenes which framed some icons of Boris and Gleb and showed details from the account of their deaths. 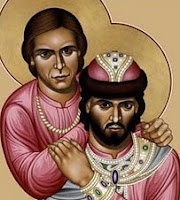 Surely Boris and George are smiling down on all the New York newlyweds. It’s a holy synchronicity that same-sex marriage became legal on their feast day there. Thanks for the link to the Jesus in Love Blog, and for all your other good works here at the Wild Reed.

What a sad and tragic story. Thanks for sharing the beautiful icon. Too bad the story couldn't have had a happier ending.