Return to the Abbey 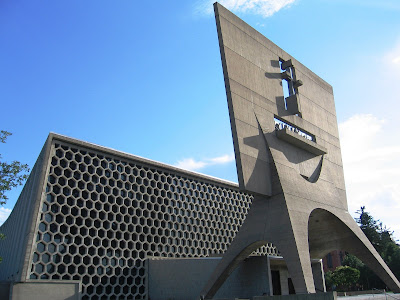 St. John's Abbey in Collegeville, Minnesota, that is! 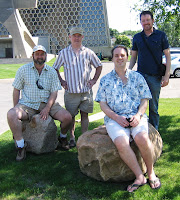 Last Wednesday afternoon (June 29) I drove to the Benedictine St. John's Abbey in Collegeville with my friends Brian, Bob and John.

It was Brian's first time visiting the abbey. I was last there in 2008 – in July for a talk by British theologian James Alison, and earlier in March with my friends Eduard and Rick. Bob and I were also in Collegeville for a July 2007 retreat entitled “Unity in Diversity,” which explored the Old Catholic Church – its history, spirituality, and conciliar (non-hierarchical) approach to church governance.

Above right: Standing at right with (from left) Brian, John and Bob. 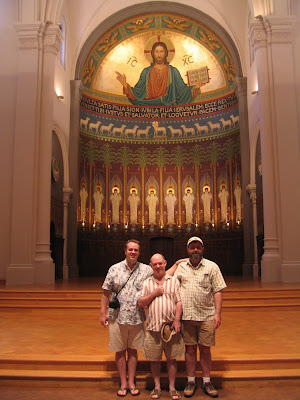 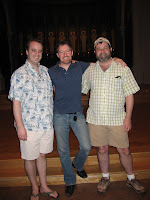 Above: Bob, John and Brian in the original abbey church.


Left: With Bob and Brian. 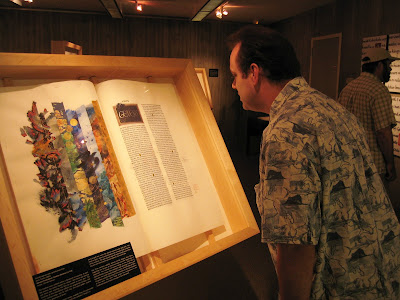 Above and below: St. John's Abbey is home to the beautiful St. John's Bible.

And, honestly, it was only after I took these photographs of the the St. John's Bible that Brian alerted me to the sign that said "No photos"! Oops! Oh, well, at least I didn't use a flash. 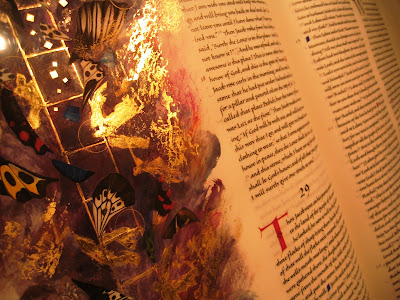 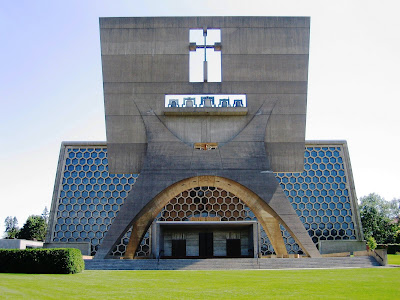 Above and below: Designed by Marcel Breuer, the "new" St. John's Abbey Church was built between 1953 and 1961. And it kinda shows, don't you think? 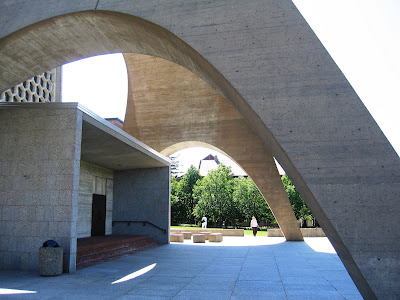 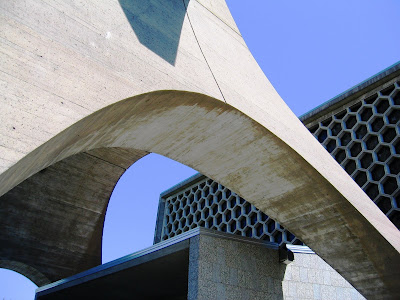 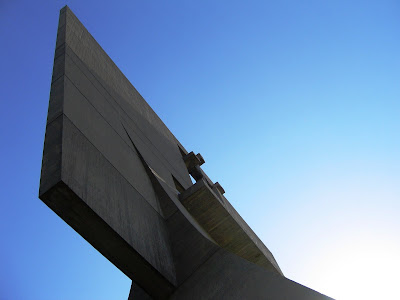 Above: The church's bell banner (or tower) stands 112 feet above the pavement and is 100 feet wide at its apex. It’s made of 2,500 tons of concrete and heavy steel reinforcing rods. The footings extend twenty feet into the ground.

As impressive as this tower is, I have to say that it somewhat reminds me of Space Station One (left) in the Space Family Robinson comics I remember as a child in the '70s! 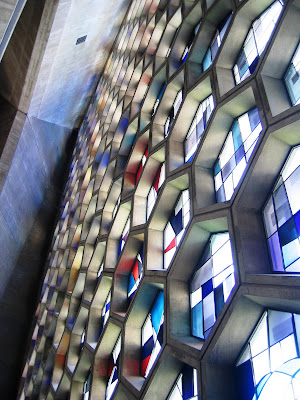 Above and below: As I note in my March 2008 post, A Day at the Abbey, the honeycombed stained glass window of the church’s facade is perhaps the most beautiful component of St. John’s Abbey Church.

This massive window was designed by Bronislaw Bak, a former member of the art department of the nearby St. John’s University, and is said to represent the “splendor of the liturgical year.” 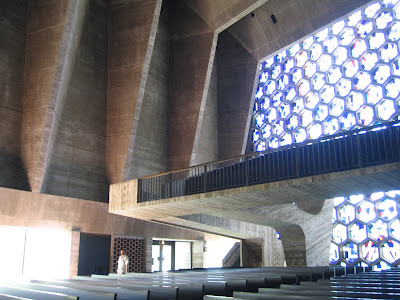 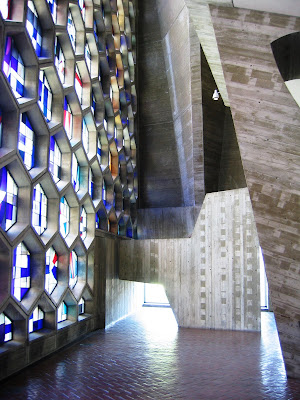 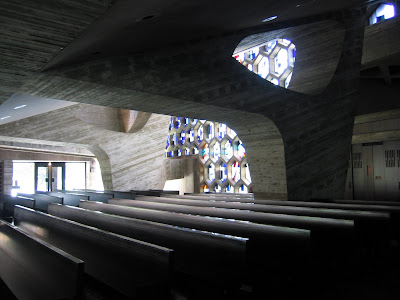 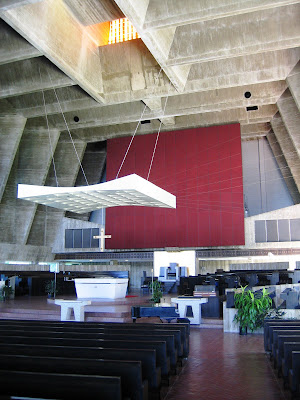 Above: In the book, Marcel Breuer: Buildings and Projects 1921-1961, Cranston Jones notes that:

The main floor plan [of the church] reflects the basic liturgical concepts of the [Benedictine] Order: one enters the symbolic center doorway, down the center aisle to the altar and abbot's throne, around which is placed the very large choir for 300. The relation of abbot's throne and monks’ choir to the congregation of 1,700 defines the shape of the plan with the altar near the center of the church in plain view of congregation, choir, and large balcony. 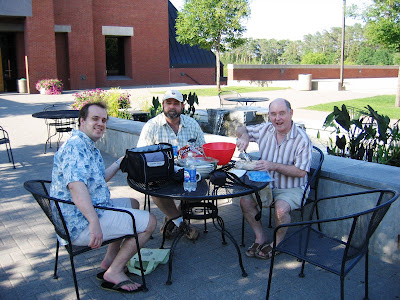 Above: Enjoying a delightful chicken salad picnic dinner outside Sexton Commons on the campus of St John's University, of which St. John's Abbey is part. 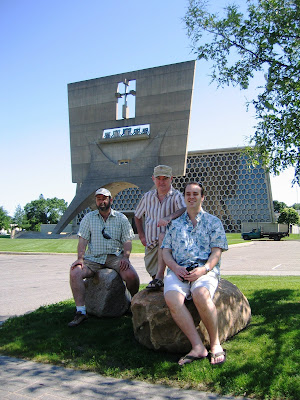 Above: Brian, John and Bob in front of St. John's Abbey Church. 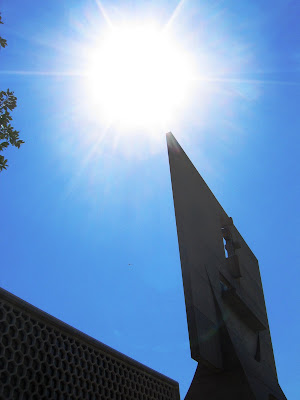 See also the previous Wild Reed post:
A Day at the Abbey

Space Station One!! LOL It was a great day at St John's thanks for posting the pictures.

These are beautiful pictures of the Abbey Church at my Alma Mater. While there, I prayed the office with the monks and went to daily Mass with my friends in this church right up there with the monks. Folks my castigate it's plainness and lack of decoration - its Brutalist modernism but if one studies the history of Benedictine/Cistercian Architecture from the 11th and 12th centuries, this all makes sense. After the opulent excesses of the Cluniac Benedictine reform movements in the 10th and 11th centuries, the Cistercians came along and built their abbey churches to be very austere with nothing to divert the gaze from inner contemplation and the action of communal prayer. St. John's Abbey Church employs the same sensibility. Aside from the window, there is a minimum of color for it is the worshipping community of people that bring the color into the space. We are thus reminded that it is the people of the Church - the Body of Christ - that gives Her Life. Thanks so much for sharing this.

Thank you, Jamez, for your wonderfully insightful commentary -- not only on your time at St. John's, but on Benedictine/Cistercian history, tradition and artistic sensibility. You've definitely added to this post, and for that I'm very grateful.

Great pictures.
Thanks for sharing.

These pictures are absolutely breathtaking! You have a wonderful eye for beauty Michael, would you know where there would be any more pictures of the inside of the abbey?

Thanks Mark and Phillip!

Phillip, I did a Google search for the interior of the Abbey and came up with these images.