A Creative Exploration of the "Spiritual Dialectic of WONDER?!" 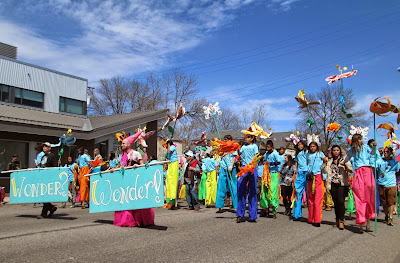 We enter the world with an exclamation point in one eye and a big question mark in the other. Most of our work boils down to the spiritual dialectic of WONDER?! Here we have the gift of a world filled with astonishing intricacies of beauty and diversity, tumultuous miracles, fomenting power and the patient relentless cycle of birth, death, and birth again. This joyous wonder has us enacting great pageants that revel in the obvious yet mysterious connection of all things. Still, in the midst of this glory, we witness the awful poverty of body and soul perpetuated by the hatred of self, the other, and the earth. This foreboding wonder calls us to untangle the artificial constructs of racism, classism, sexism and inexplicable greed. It asks us to dance down the linear fear of death that manufactures systems of excess and genocide – and ultimate defeat. Our exclamations and questions spiral according to the internal and external pulse of the times, giving rise to the specific content of our work.

– Sandy Spieler
Excerpted from Theatre of Wonder: 25 Years in the Heart of the Beast

As I recently noted, the title and theme of this year's In the Heart of the Beast Theatre's annual Mayday parade was "Wonder? Wonder!" It was inspired by the above quote by Sandy Spieler and the following two quotes by marine biologist and conservationist Rachel Carson (1907-1964). Carson's landmark book, Silent Spring, along with many of her other writings, are credited with galvanizing and advancing the global environmental movement.


The more clearly we can focus our attention on the wonders and realities of the universe about us, the less taste we shall have for destruction.

– Rachel Carson
Excerpted from The Sea Around Us (1954)

If I had influence with the good fairy who is supposed to preside over the christening of all children I should ask that her gift to each child in the world be a sense of wonder so indestructible that it would last throughout life as an unfailing antidote against the boredom and disenchantment of late years, the sterile preoccupation with things that are artificial. the alienation from the sources of our strength.

Following are some of the photos I took of the seven scenes or sections of this year's Mayday parade. The text that accompanies these images is excerpted from the parade program. Unless otherwise noted, these excerpts were written by folks involved with In the Heart of the Beast Theatre. 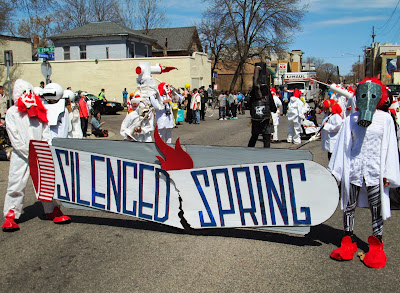 Silenced Spring envisions the folly of the consistent human tendency to control the natural world and to measure its worth as an extraction of profit. 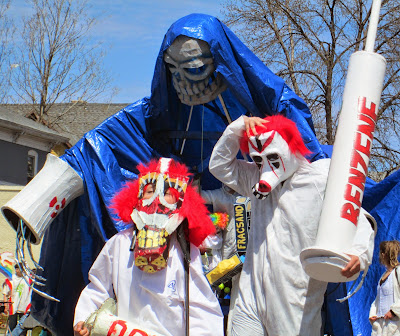 Extolling "Better Living through Chemistry," characters in masks administer toxic medicine to the Tree of Life. 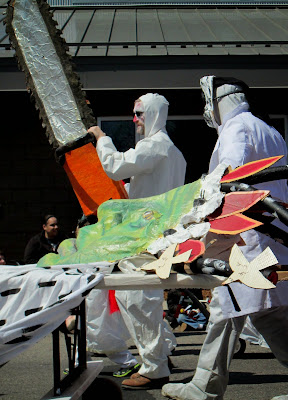 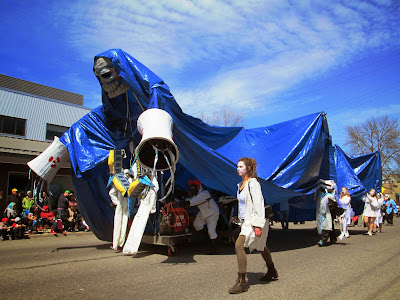 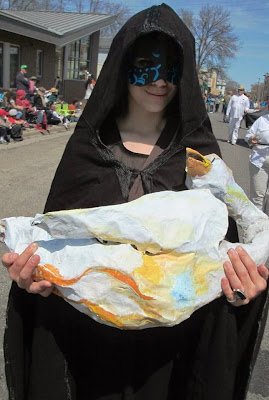 In the words of Zen teacher John Tarrant, "Attention is the most basic form of love." In this section of the parade, seven huge ears move solemnly down the street, asking us to Listen! Pay attention! and Wonder. The ears are bent to the ground. They stretch outward to catch the slight buzz. The ears move through humans cradling dying bees and birds, hearing the mourning of the humans.

If we 'listen into' the Silenced Spring, what might we discover? Let us open our perception will all of our senses – eyes, ears, hands, heart, and mind. The dying bees and birds are telling us something is amiss. Their illness is an indication of a much bigger problem. 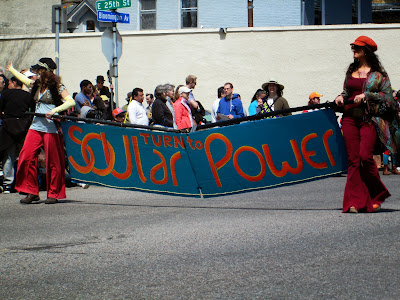 "SOUL-ar Power" is a combination of sun energy with heart energy. 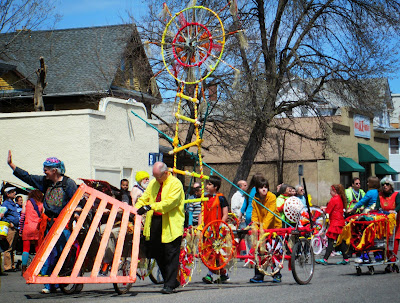 The Soul Train features the solar lantern and community weaving work of Communities of Light, and ushers in the turning of heart energy and action toward the health of all, just as the great wheel of the sun turns our days into years. 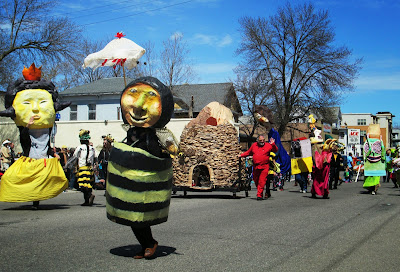 I dreamt I had a beehive, here inside my heart. And the golden bees were making white combs and sweet honey from my failures. 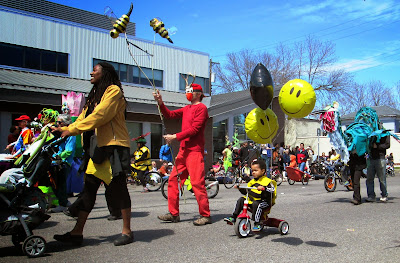 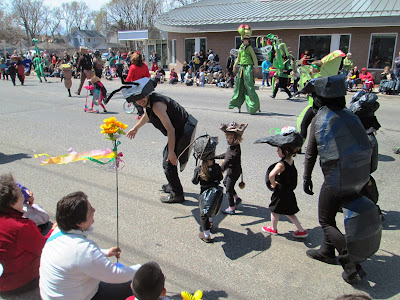 If you averaged the size of all animals on the planet, the result would be a creature the size of a fly. There are so many intricate relationships in the natural world that exist on a scale smaller than a mouse's body. In fact, to see most of the animal interactions on the planet, you need a magnifying glass or a microscope. [In this section of the parade] we chose to magnify some of the most lovable and fascinating interactions: moss and the microscopic creatures that dwell in the moist mossy micro-climate; the amazing pitcher plant; lichen; flowers, and the beetles, dragonflies and other insects that live inside them; and peonies, which produce a sweet sap that ants love. 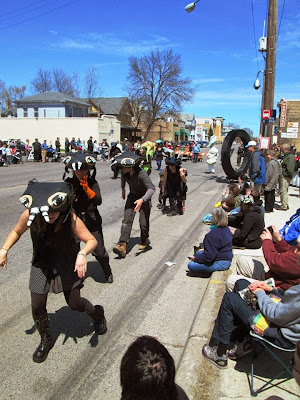 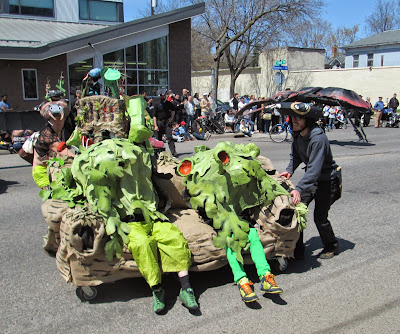 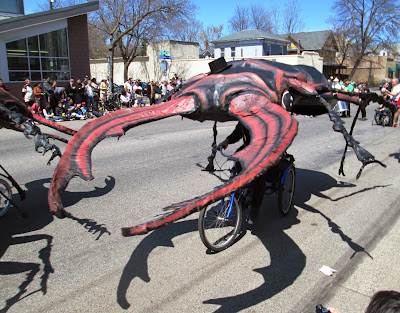 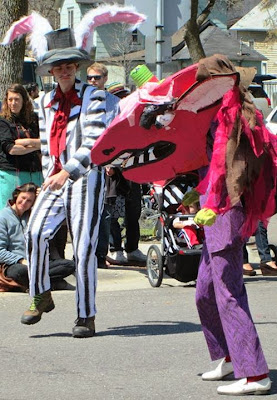 The Wonder Shuffle is all about large things: connection and awe, the vibrancy of nature, and unlocking our souls to experience the world. The term 'shuffle' refers to a dance in which two lines form a corridor for partners to dance down. Each time through the line partners change – allowing many different dancers to connect. In this section a variety of animals shift partnerships down the street together. . . . Much like the progressive nature of the shuffle, a large number of creatures mix and mingle. 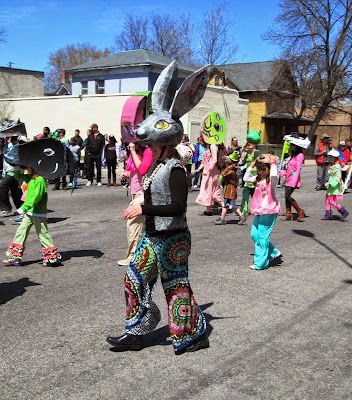 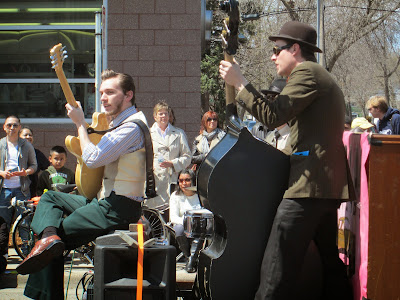 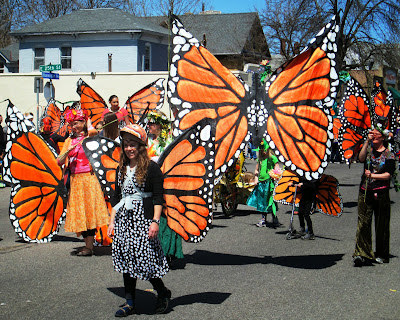 What does it mean to be arrested by wonder? We have all, at one time or another, been seekers. Sometimes on our journey we miss the most obvious signposts. Sometimes wondrous things happen before our eyes and we just can't see them. When wonder touches our hearts, however, it demands our full attention 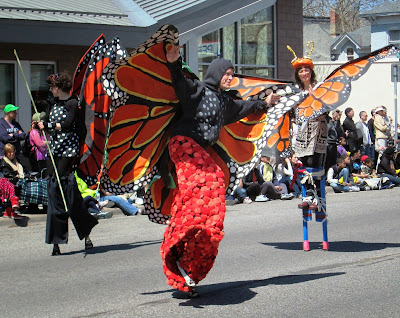 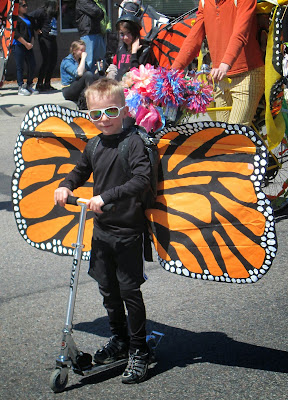