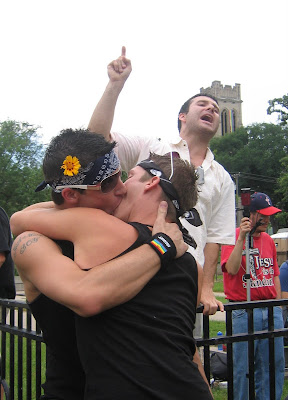 “The Kiss” by Michael Bayly. 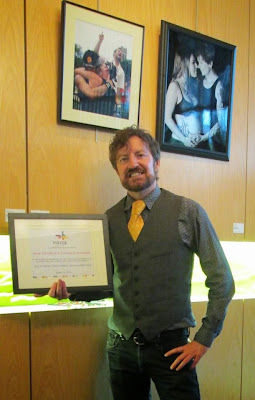 I kick-off The Wild Reed's 2014 Queer Appreciation series this evening with some good news: My photograph “The Kiss” won the People's Choice Award at this year's Twin Cities Pride Art Exhibition. This exhibition opened last night with a reception and awards presentation at the Aloft Hotel in Minneapolis.

“The Kiss” depicts two gay men kissing in front of an anti-gay street preacher at the 2010 Twin Cities’ Pride festival in Loring Park, Minneapolis. I previously shared this image as part of the The Wild Reed posts Photo of the Day – June 26, 2010 and A Catholic Presence at Gay Pride (2010). The latter post provides background information on “The Kiss,” including how I came to take this award-winning photo!

This year’s exhibition theme is titled FREE TO BE in honor of the diverse identities that make up the Twin Cities LGBT community. Artists were asked to draw inspiration from the concepts of FREEDOM and SELF IDENTITY and show us through their artistry what FREE TO BE means to them.

This year’s theme is intended to promote and recognize the idea that we are all free to be ourselves and celebrate the diversity within our LGBT community, and recognize the broad cross-section of the Twin Cities population that we represent. Whether it is the proud drag queen, the lesbian couple and their children, the leather man, the gender variant individual or the newly out and proud teen, the LGBT community finds itself a part of every social, economic, and political division – all ethnicities, races, sexes, ages, economic situation, political persuasion, and lifestyle. Twin Cities Pride encourages artists to embrace, promote and demonstrate this uplifting theme in their works of art. Our community is now, and has been in the past; diverse, powerful, strong and most importantly passionately empowered to be seen, heard and respected. 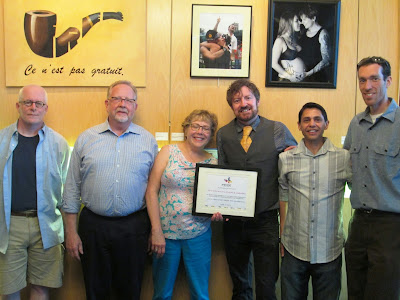 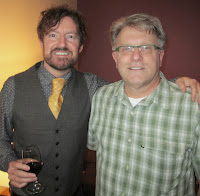 Above: With my friends (from left) Rick, George, Joan, Raul, and Tim at last night's opening of the Twin Cities Pride Art Exhibition – Aloft Hotel, Minneapolis.

Left: With my friend Greg. 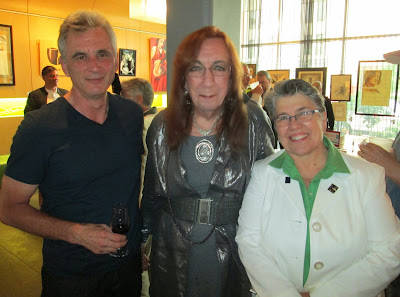 Above: My friends Mark, Barbara and Cheryl.

Spirit on Lake, a LGBT senior-focused affordable housing project, won the Community Champion Award from Twin Cities Pride. Noted my friend Barbara Satin, a driving force behind the project: “While I was honored to be able to accept the award and comment on the project, my biggest thrill came when I introduced the table full of wonderful residents who came to show their support of Twin Cities Pride. Kathleen Tully, the 'angel' who is the building manager accepted the award with me – she is a gift from heaven to this residential community.”

For Minnesota Public Radio's story on Spirit on Lake, click here. The project has even made international news.

Harvey Zuckman was the recipient of the 2014 Twin Cities Pride Lifetime Champion of Pride Award, while U.S. Bank received the Corporate Champion Award.

Harvey Zuckman’s remarkable humanitarianism most notably dates back to the creation of the Minnesota Freedom Band in 1983, recognized as one of the first GLBT bands in the United States. Harvey was also a major contributor to the establishment of the Lesbian and Gay Band Association along with six other GLBT Bands in the early ’80s. Both organizations celebrated their 30-year anniversaries in 2013.

Apart from his contributions to GLBT music, Harvey is the founder of First Tech, the first Apple retailer in the U.S. which recently closed in Uptown. He has also volunteered countless hours of his time towards local causes including the AIDS Walk, Red Ribbon Ride, Quorum, Inter-faith Community, and other nonprofit organizations. Harvey and his husband Phil were actively involved with the Vote No Campaign as well as the Marry Me Campaign.

According to his nominator, Harvey has served as both a role model and an adviser as he stepped into a new role as Artistic Director of the Minnesota Freedom Band, providing the appropriate guidance to “lead the band in its new artistic direction.” 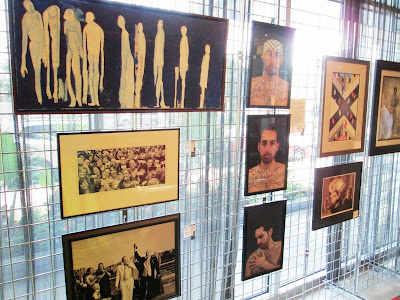 Above: At last night's event, the middle photograph at left, “Mrs. and Mrs.” by Sher Stoneman, was awarded first prize by a jury comprised of three local artists.

The work in center of the image above, comprised of three photographs, is part of the Allahu Akbar project. It won second prize.

Sexual orientation has always been contested by religious scholars, priests, rabbis, pundits and imans. From Mecca to the Vatican and Jerusalem, sexuality, identity and agency of gay and lesbian men and women have been executed on the gallows of Islam, Christianity and Judaism. Gays and lesbians have been struggling to find a juncture where their religious and sexual identity could merge. However, a majority is being forced to pick between their religious or sexual identity. Quran, Bible and Torah have made references to sexual minorities in varying ways.

For previous Wild Reed posts on this subject, see: Parvez Sharma on Islam and Homosexuality, Coming Out in Africa and the Middle East, and The Blood-Soaked Thread. 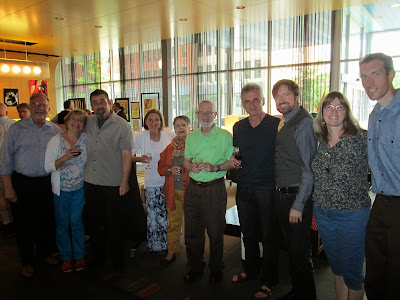 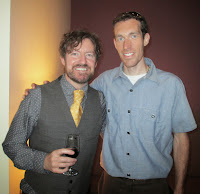 Above: With my friends (from left) George, Joan, Brian, Carmen, Noelle, John, Mark, Lisa and Tim.


Left: With my good friend and housemate Tim. 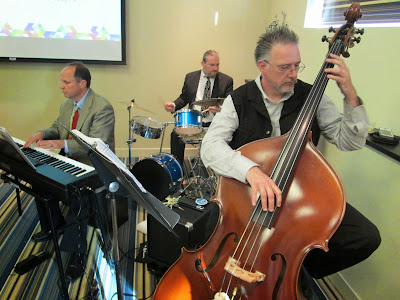 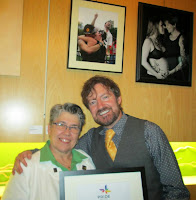 Right: With my friend Cheryl, after receiving the People’s Choice award for “The Kiss.” 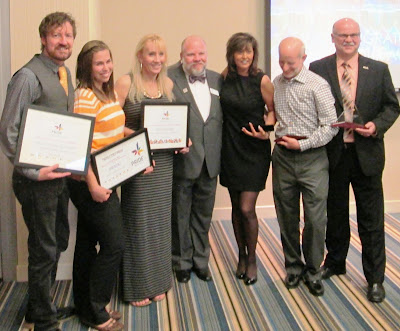 Above: With fellow award winners at last night’s event at the Aloft Hotel.

Standing second from right is Harvey Zackman, recipient of the 2014 Lifetime Champion of Pride Award. Standing to Zackman's right is Minneapolis Police Chief Janeé Harteau, who will serve as one of the two Grand Marshals at this year's Twin Cities Pride parade on Sunday, June 29. The second Grand Marshal will be former Minneapolis mayor R.T. Rybak, who unfortunately was not able to attend last night's event.

For more about the 2014 Twin Cities Champions of Pride Award winners, click here.

For The Wild Reed's 2012 Queer Appreciation series, see:
• The Theology of Gay Pride
• Bi God, Somebody Listen
• North America: Perhaps Once the “Queerest Continent on the Planet”
• Gay Men and Modern Dance
• A Spirit of Defiance
• A Catholic Presence at Gay Pride – 2012
• Worldwide Gay Pride – 2012

For The Wild Reed’s 2010 Gay Pride series, see:
• Standing Strong
• Growing Strong
• Jesus and Homosexuality
• It Is Not Good To Be Alone
• The Bisexual: “Living Consciously and Consistently in the Place Where the Twain Meet”
• Spirituality and the Gay Experience
• Recovering the Queer Artistic Heritage
• A Catholic Presence at Gay Pride – 2010
• Worldwide Gay Pride – 2010

For The Wild Reed's 2009 Gay Pride series, see:
• A Mother’s Request to President Obama: Full Equality for My Gay Son
• Marriage Equality in Massachusetts: Five Years On
• It Shouldn’t Matter. Except It Does
• Gay Pride as a Christian Event
• Not Just Another Political Special Interest Group
• Can You Hear Me, Yet, My Friend?
• A Catholic Presence at Gay Pride – 2009
• Worldwide Gay Pride – 2009

What a perfect moment you caught. I remember the preacher and you show his thousand words are useless.