Steven W. Thrasher on the Bland and Misleading "Gay Inc" Treatment of the Struggle to Overturn Prop 8 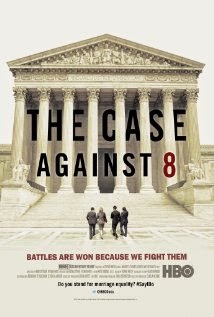 The Wild Reed's 2014 Queer Appreciation Month series continues with an excerpt from Steven W. Thrasher's critique of the documentary film, The Case Against 8. (To start at the beginning of this series, click here.)

Thrasher's critique was first published June 24, 2014 by The Guardian.


. . . The Case Against 8 – a documentary about the fight to overturn California's voter referendum that prohibited same-sex marriage for five years – leaves viewers with the unmitigated impression that Proposition 8 was overturned by a small group of very rich white people, the Great White Hope of Marriage Equality. It's a difficult conclusion to avoid when two of the biggest heroes of the film are actually two straight men: liberal attorney David Boies and conservative attorney (and former US solicitor general) Ted Olson, who famously faced off in the Bush v Gore recount decision.

Seeing white men – and straight white men – as the face of queer life in American film is not exactly new: Tom Hanks won an Oscar for Philadelphia; Al Pacino got an Emmy for Angels in America; Jared Leto and Matthew McConaughey took home the golden statuettes this year for their work in Dallas Buyers Club. And HBO's own queer programming – The Laramie Project, Looking, The Normal Heart, Angels in America – has never been especially concerned with people of color. Even documentaries like How to Survive a Plague never evinced much interest in showing people who aren't white who are advancing LGBT progress.

And yet one of the ugliest flashpoints in the Prop 8 fight came when "backwards" black people were framed as the major roadblock to the advancement of gay rights – most infamously in noted columnist and LGBT rights activist Dan Savage's November 2008 blog post, Black Homophobia, which was thoroughly debunked.

People of color did play major roles in the events spanning the 2008 referendum to last year's US Supreme Court ruling, though you wouldn't know unless you watched to the very end of The Case Against 8: California attorney general Kamala Harris ordered marriages to begin immediately after the case was decided, and she and Los Angeles mayor Antonio Villaraigosa married the two sets of plaintiffs. I was glad they were included in the film, but it was frustrating to sit through a two-hour prime time documentary about gay rights – Sundance-screened, HBO-produced – in which the only prominent black person shown before the last few scenes is President Obama.

. . . In failing to deal with the issues of race endemic in the LGBT rights movement and the Prop 8 story in particular, The Case Against 8 doesn't just lose a mass-audience opportunity to give a fuller picture of history: in only showing the white plaintiffs, white lawyers and white politicos who eventually moved the case along, the film furthers the narrative that the advance of gay rights is the sole doing of enlightened white saviors.

Of course, that might have been the point. Directors Ryan White and Ben Cotner have created little more than a work of Hallmark kitsch, intentionally devoid of conflict – and their access to the subjects of the film appears to come at the cost of ever allowing the audience to see disagreement or tension, in or outside the case. Everyone interviewed in the film – including David Blankenhorn, the anti-gay witness for Prop 8 who famously changed his position during the case – agrees that gay marriage should be legal.

Much less than resembling a documentary depicting the gray area of a political campaign like DA Pennebaker's The War Room or even some of HBO's great documentaries, The Case Against 8 makes for a film that smells suspiciously like the work of a public relations firm. Where this "balanced" film succeeds – perhaps inadvertently – is in showing just how skillful "Gay Inc" is at that sort of bland PR.

The four plaintiffs in the Prop 8 case were not random folks but well-groomed and carefully-selected spokespeople chosen by American Foundation for Equal Rights (Afer). In one of The Case Against 8's most revealing moments, Boies says Afer needed plaintiffs to be "people who were just like everybody else and who were obviously just like everybody else" – i.e., not too queer, colorful or poor. For that, the team picked two white, financially well-off couples who wanted to get married – and then hired private investigators to do opposition research on their own clients, much like a political campaign would.

The lionized lawyers also made a lot of bank off their clients: Afer paid out over $6m in legal bills for their services. That lies in stark contrast to historic civil rights cases like Brown v Board of Education, or even to the other big gay marriage case of last year, Windsor v US – both of those were backed by pro-bono counsel.

Politically, The Case Against 8 underscores a major tenet of the marriage equality movement: that the sole civil rights issue of our time centers around middle-class homosexuals who want to get married. The racial myopia of this view is revealed in The Case Against 8 when attorney Ted Boutrous asks this on camera: "Is there any other identity group required to fight for fundamental civil rights? Other than gay and lesbian individuals, in terms of the law?"

Mining the racial soul-searching undergone by LGBT activists after Prop 8 would have made for great drama – the stuff films ought to be made of – but once again it's been politely ignored by the very Hollywood insiders running the high-profile arm of that activism. Also left ignored in the film is any direct mention of the Human Rights Campaign, which initially did not approve of using its considerable lobbying firepower to overturn Prop 8.

What about the thousands of people, of all colors and economic classes, who did the hard work on the ground of changing hearts and minds during those interminable five years? It was all of those people, as much as any pair of hot-shot constitutional lawyers, who changed public opinion – because you can't build a new majority view without minorities. Without all the poor, working class, black, Latino and gay people from outside of Hollywood or San Francisco or Washington, the strategy of winning over straight and mostly white people by appealing to their middle-class values never would have worked. And it wouldn't have worked on federal judges either.

But that is a messier history, filled with messy, complex people whose lives wouldn't have withstood the scrutiny of opposition research – as, realistically, most of our lives would not. As the effect of this film's central storyline winds its way through state legislatures and courthouses en route back to the supreme court for full-on equality, maybe we'll see more than two of the 18,000 married California couples held in legal limbo by Prop 8, or the thousands more waiting for the next big decision. Public relations tends to eschew the complexity of experience and, especially right now, the complexity of the queer experience. A good documentary, however, should not.