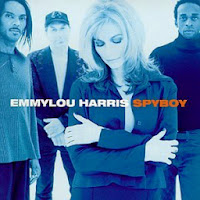 . . . That's how one writer describes the music of Emmylou Harris when reviewing her 1998 live recording, Spyboy.

"Spyboy" is not only the name of this particular album but also of the backing band that Harris formed for a tour to support her 1995 career-redefining album, Wrecking Ball. On this tour, along with tracks from Wrecking Ball, Harris also performed songs from earlier in her career, including "Born to Run" from Cimarron, "Love Hurts", which she first performed with Gram Parsons, "I Ain't Living Long Like This" from Quarter Moon in a Ten Cent Town, and her ode to Parsons, "Boulder to Birmingham", from her 1975 debut album, Pieces of the Sky. Live recordings of all of these tracks appear on Spyboy, the album.

At the time of her Spyboy tour, music critic Michael McCall noted the following about Emmylou Harris and her music.

Most pop musicians in their 50s spend their stage time reflecting on past accomplishments. Emmylou Harris, on the other hand, is still moving forward, seeking new challenges and pushing into new musical territory. Always artistically restless, Harris has offered nearly a quarter century of interesting ideas. However, at age 51, she's creating some of the most lasting and moving music of her life. Fronting a band featuring the New Orleans rhythm section of drummer Brady Blade and bassist Darryl Johnson, and with alternative-country hero Buddy Miller on guitar, Harris presents daring music that is both dark in tone yet spiritually open-hearted. In doing so, she's managed to combine the progressive, provocative tension of 1996's Wrecking Ball with the tradition-based music of her earlier work.

I experienced Emmylou Harris in concert in August of 2001 at the Historic State Theater in downtown Minneapolis. At that time she was on tour in support of her album Red Dirt Girl. Without doubt she's a gifted singer/song-writer and a mesmerizing performer. She's also an artist whose work conveys a deep spirituality, though one that never comes across as preachy. Rather, it's a spirituality that's very much grounded in the rich and fertile, though often messy seedbed of human experience.

For "music night" this evening at The Wild Reed I share Emmylou Harris and Spyboy's rendition of Daniel Lanois' "The Maker," a song about which Phish.net notes:

In the same vein as "Amazing Grace," Lanois’ "Maker" draws smooth lyrics across a simple but powerful musical base. The singer laments having erred into darkness, and pauses to sigh at his choosing to be saved. The song’s smooth spirituality has fooled some to think it is an old hymnal. But even though not penned until 1989, "The Maker" has already become a classic, covered often by Willie Nelson, Emmylou Harris, Jerry Garcia Band, and the Dave Matthews Band. Lanois himself re-released it as part of his sound-track to the 1996 movie Sling Blade – and, a year later, recorded "Amazing Grace" for a compilation by the same name.

The video of Emmylou Harris and Spyboy's performance of "The Maker" is followed by Christopher P. Dunn's Amazon.com review of the Spyboy album. Enjoy! 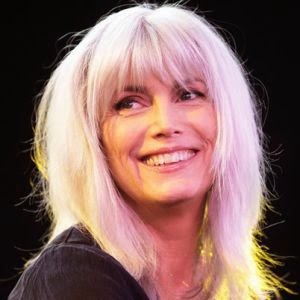 Spyboy is an astonishing album – not only does it capture the essence of who Emmylou Harris is (as a singer and songwriter), but it showcases her wonderfully as a live performer. Spyboy is a brilliant title for this live CD. The spyboy is the young lad who leads off the Mardis Gras parade, which is a great metaphor for Harris' career. She has always been at the forefront of defining and redefining the confluence of country, rock, and folk music.

Here, she and her band beautifully reinterpret songs that she has made into classics. "My Songbird," a Jesse Winchester gem, is delivered in classic Harris style – aching, plaintive, and with an air of resignation. It doesn't matter that the song is written in the first person and spoken by a man. This is a haunting and painful song about separation that only Harris could deliver so sweetly.

This theme of pain, separation, and moving on permeates this recording, and is exemplified by such songs as Daniel Lanois' "Where Will I Be," the traditional "Green Pastures," and her own composition about Gram Parsons, "Boulder to Birmingham." But this is not sappy sentimental country-folk-rock. Instead, it is intelligent music making in the same way that is true of other performers such as Richard and Linda Thompson, Mary Black, or Mary Chapin Carpenter.

The aura cast by the musicians is somewhat ethereal, being clearly influenced by Daniel Lanois, long-time producer of U2's recordings, and of Bob Dylan's "Oh Mercy." Lanois' influence on Harris is most pronounced in her Wrecking Ball recording, a style that overflows into this live concert. In fact, Harris sings two Lanois compositions, in addition to "Deeper Well" (a song I have yet to appreciate), which they co-wrote. I have to admit that I'm getting a little tired of the Lanois style (he's also produced a recent Willie Nelson recording), however, there's no denying his success. My other pet peeve is that any recording that Lanois produces includes one or two of his songs. He seems great at marketing himself and his production style. Mercifully, a performer like Harris is so transcendental that one doesn't notice such seeming trivialities. Rather, this (or any other Harris recording) is an experience not to be missed.

For more of Emmylou Harris at The Wild Reed, see:
The Wonder You Bring
"Here I Am" – The Lenten Response