Kittredge Cherry on the "Tough Questions" Raised by the Uganda Martyrs

How can the story of the Uganda Martyrs be interpreted so that LGBT Ugandans have equal access to justice and to God? That's one of a number of questions raised by Kittredge Cherry in her "commentary today on her blog, Jesus in Love. It's an important question, especially given the current situation in Uganda for LGBT people, and Kitt's commentary is both timely and insightful. Following is an excerpt. 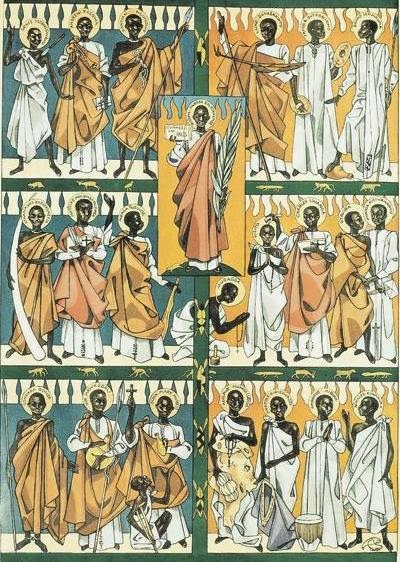 Tough questions about homosexuality, religion and LGBT rights are raised by the Uganda Martyrs whose feast day is today (June 3).

Forty-five Ugandan male pages refused to have sex with their king after they converted to Christianity – so he executed them. Many were burned to death on June 3, 1886. These boys and young men were canonized by the Roman Catholic and Anglican churches, leaving some truths hidden by their halos.

. . . The Uganda Martyrs have been used to instill homophobia and, as Pope John Paul II put it, “to draw Uganda and all of Africa to Christ.” The story weaves together homo-hatred, racism, and imperialism that are still affecting the world today. Conservatives play up the sexual angle in salacious detail to win converts, discredit the LGBT-rights movement and promote “chastity.” At the other extreme, LGBT-rights advocates use the story to prove that homosexuality was indigenous to Africa, not a “western import” as the anti-gay faction claims. They tend to ignore the difference between sex and rape, while both sides blur the line between homosexuality and pedophilia.

For me the story leads back to the same questions that people of faith are grappling with all over the world now: How can the church condemn sexual abuse while still affirming the goodness of sexuality, including same-sex relationships? The search for a new LGBT-positive sexual ethics is expressed in books such as Sex as God Intended by gay priest and psychotherapist John McNeill and Sexuality and the Sacred, edited by James B. Nelson and Sandra P. Longfellow.

Today’s understanding of human psychology shows that rape is violence, not sex, and that pedophilia is not homosexuality, regardless of the gender of the child targeted. Christianity has been used to oppress queer people and colonize native peoples, but sometimes it has also provided an escape from abuse and an alternative to heterosexual marriage. . . .

See also the previous Wild Reed posts:
Quote of the Day – March 10, 2014
A Christmas Message of Hope . . . from Uganda
In Uganda, a “Fearless Voice” for Gay Rights is Brutally Silenced
Coming Out in Africa and the Middle East
The Scourge of Homophobia in Economically Impoverished Countries
The Blood-Soaked Thread
Liberated to Be Together
A Prayer for International Day Against Homophobia
Sergius and Bacchus: Martyrs, Saints, Lovers

Image: "Karoli Lwanga and his Followers" by Albert Wider (1962).