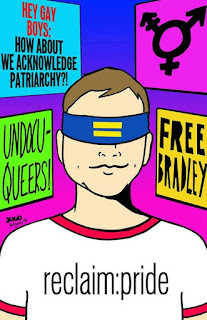 The Wild Reed's 2015 Queer Appreciation series continues with excerpts from an article by writer, storyteller and organizer Ngoc Loan Tran.

Although this article was originally published in 2013, it remains very much relevant today, as LGBT Pride events are still, in Tran's words, "divorced from their historical legacy" and no longer "carry[ing] the same weight they once did."

She begins her article by reminding us how the events in New York City on June 28, 1969 "wrote queer and trans folks into history permanently." Continues Tran . . .

While the Stonewall Riots that began on that night were not the first time the LGBT community retaliated against anti-queer and trans violence (see, for example, the Compton's Cafeteria riot of August 1966 [and also the LGBT community's response to the police raid on the Los Angeles Black Cat Bar in 1966]), the Riots are often regarded as the spark that began the ‘gay liberation movement.’ The Riots were an intentional disruption of the routine police raids that took place at the popular Stonewall Inn in New York City’s Greenwich Village.

The Riots served as a catalyst for queer and trans* folks, particularly those living in New York City, to come together and work towards building a community invested in actively resisting targeted violence. A year after Stonewall, cities like Los Angeles, Chicago, and New York City held their first ‘Gay Pride’ marches to commemorate the one-year anniversary of the Riots that started it all.

I appreciate Tran's historical perspective and her critique of contemporary Pride celebrations. They remind me of my younger days when, in the early 2000s, I founded and coordinated Queers United for Radical Action (QURA), a network of LGBT activists dedicated to educating itself and the wider LGBT community on the threats to democracy, human life, and the environment posed by the nexus of corporate globalization, militarism, and environmental degradation. We also sought to organize and participate in educational and non-violent direct action events in order to facilitate positive and radical social and economic change, and to facilitate and share a uniquely queer spirit of resistance to all forms of oppression.

And so, yes, I resonate with Ngoc Loan Tran's critical perspective on Pride . . . and with the powerful and eloquent way she articulates this perspective in her 2013 article "Re-Queering Pride," from which the following is excerpted.

Pride is most comfortable for gay folks who experience their queerness in the context of being white, skinny, able-bodied, and financially secure. These are the bodies that are seen as desirable within the context of Pride and their experiences are centered, often at the expense of the humanity of others. This sort of comfort is evident in the ways Pride events can still develop relationships with banks and corporations while ignoring the ways these very institutions do our larger community harm. Internalizing these relationships as a reflection of the “progress” we have made doesn’t indicate progress at all; it means the internalization of the oppression we face. It means that our desirability is still being defined by those with power over us.

The Stonewall Riots were led by members of our community who were considered undesirable by other lesbian and gay folks because of their skin color, their means of survival, their gender, their class status or even their politics of radical change. Outside of the queer community, those who led the Riots were considered undesirable by the government and larger society as well. Their legacy planted a vision of a future where we would create our own standards of desirability that actively undermine oppressive systems and structures.

On some level, I think we know that there is work left to do. We know that Pride today is not reflective of our history, and does not center the experiences of those who live at the intersections of oppression and are seen as “undesirable”. Rather, the inaccessibility of most Pride spaces means many of us do not see ourselves fully reflected or represented. I often find myself being forced to choose between parts of myself, different aspects of my identity, as I navigate the urge to celebrate while wanting to remain critical and being discouraged from doing so.

Pride does not foster a sense of community. We see that evidenced in the way that intentional, politicized spaces like Black Gay Pride, Dyke Marches, and Trans* Days of Action must be created even within Pride. These kinds of internal Pride spaces serve as an alternative for folks like me who have felt alienated and foreign in mainstream Pride spaces from Charlotte to Manhattan.

Don’t get me wrong, I believe in celebrating. I believe that we queers should celebrate ourselves as we live through the daily horrors. There is celebration in liberation, and in this process of revolution. But, I also believe that being critical while celebrating is possible and necessary. I believe in our collective responsibility to one another to deal with oppression in all of the ways it manifests. We need to have tough conversations about how Pride is often most comfortable for the people in our community that possess profound privilege alongside their queerness.

I don’t want us to forget that heterosexism needs us to believe that we have succeeded.

I want to recognize that we won’t all of a sudden be delivered to a Pride that is imbued with a totally beautiful, radical, and anti-oppressive magic. We must deliver ourselves. But I am a queer with limitless hope, and I believe that rooted in the magic of our collective resistance is the possibility of making Pride queer again.

I want us to remember history and hold the sacrifices of our queer and trans* ancestors in our bodies. I want us to be present in the now as it unfolds and reveals that after a June drunk with corporate excess, heavy and heartbreaking work remains.

I want us to recognize that there is celebration in queerness and there is no such thing as the wrong time to talk about ourselves. I want us to remember ourselves as complex, multi-layered people who have more power than we are led to believe. And when I talk about our power, I do so in a way that honors the vision of our ancestors who called for liberation, justice and freedom over heterosexist privilege. I’m talking about a power that is responsible, that does not forget our roots or ignore our potential to be transformative and intentional in all we do.

NEXT: Part III – Standing with Jennicet Gutiérrez,
"the Mother of Our Newest Stonewall Movement"

For the first installment of the 2015 Wild Reed Queer Appreciation series, see:
• Vittorio Lingiardi on the Limits of the Hetero/Homo Dichotomy