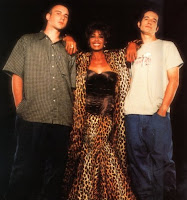 This evening’s Wild Reed “Friday Night Music Spot” highlights yet another unusual musical collaboration. (You may recall that previous such collaborations highlighted here at The Wild Reed have involved the likes of Larry Adler and Kate Bush, Loretta Lynn and Jack White, and Pet Shop Boys and Dusty Springfield). 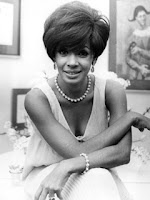 Bassey is perhaps best known for the three James Bond theme songs she recorded in the 1960s and ’70s (Goldfinger, Diamonds Are Forever, and Moonraker). Her career, however, encompasses considerably much more than these particular recordings. In fact, she holds the record for the longest span of Top 40 hits in UK chart history. Her latest album, The Performance, has just been released in the UK. It features songs written by Manic Street Preachers, Gary Barlow, KT Tunstall, Pet Shop Boys, Kaiser Chiefs, Rufus Wainwright, John Barry, and Don Black. (For a review of this album, click here.)

In 1997, the Propellerheads, a British big beat music band made up of electronic producers Will White and Alex Gifford, invited Bassey to collaborate with them on the wonderful (and highly danceable) “History Repeating.”

The word is about, there’s something evolving
Whatever may come, the world keeps revolving
They say the next big thing is here
That the revolution’s near
But to me it seems quite clear
That it’s all just a little bit of history repeating

The newspapers shout a new style is growing
But it don’t know if it’s coming or going
There is fashion, there is fad
Some is good, some is bad
And the joke is rather sad
That it’s all just a little bit of history repeating

Some people don’t dance, if they don’t know who’s singing
Why ask your head, it’s your hips that are swinging
Life’s for us to enjoy
Woman, man, girl and boy
Feel the pain, feel the joy
And side step the little bits of history repeating


Notes Wikipedia: “Bassey released a new recording [in 1997], “History Repeating,” written for her by the Propellerheads and scoring a #1 on the UK dance music chart. The single reached the top five in Spain, Italy and Germany, and the top ten of the US dance chart. The liner notes of the Propellerheads’ album Decksandrumsandrockandroll included the lines ‘We would like to extend our maximum respect to Shirley Bassey for honouring us with her performance. We are still in shock ...’ ” 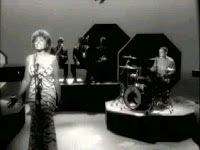 In 1998, the Miami Times reported the following on Bassey’s thoughts on “History Repeating” and its recording.

The song, a catchy, synthesizer-thumping dance number, has been all the rave in clubs in Miami as well as around the globe. Bassey says she was asked to participate after lead Propellerhead Alex Gifford wrote the song with her in mind. “He said he was asleep, and he thought about me, and these words came out,” she explains. “And I asked, what’s a 35-year-old man doing thinking about a grandmother? I couldn’t imagine,” she laughs. A demo was sent to Bassey and the rest, as the song says, is history - but not without some initial reluctance on her part.

“When they sent it to me, I heard it and I was dancing around. I loved it. But I didn’t think it was for me.” Bassey felt the song was a little too rock and roll, more appropriate for Tina Turner. “It wasn’t Bassey,” she crows, matter-of-factly. “But, ah! Thank God they didn’t listen to me! They wrote it for Shirley!”

Bassey hit the studio a few weeks later and made the song her own, with a little steering from Alex. “He said, ‘This is not the way I want it. Can you go a little lower?’” she says, bringing her voice down a few notes. She insists there was no temperament at the session, and she “went right down there -- a different alley -- and that voice came out and that’s exactly what they wanted. And within an hour, it was all over. I walked away, we kissed and hugged, and that was it. I didn’t think anymore of it. And it was a hit.” Bassey now performs the song in concert (“I have to! Everybody is waiting for it. They don’t think I’m going to do it, but when I do, they howl!”).

Naturally, a video followed, though Bassey was less than enthralled with the process. “Well, at first they mentioned it, but I didn’t think anything would come of it,” she quips. “So when I did do the video, my God, it was so hard. They are so long, and they take forever. I stood there from 1:00 p.m. until midnight in this dress that I couldn’t lift up. I couldn’t even go for a pee.”

For more of Shirley Bassey at The Wild Reed, see:
• The Rhythm Divine
• The Living Tree

worship her as the one true god