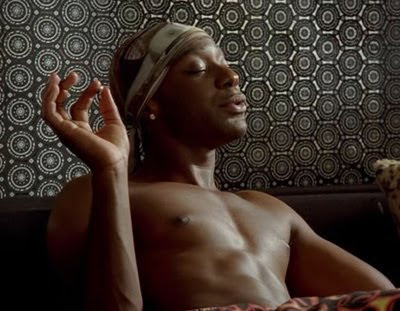 This particular quote from Kriston Capps’ recent DCist.com commentary gave me a good chuckle and made me think of the character of sassy (and irreverent) gay short order cook Lafayette Reynolds (pictured above) in HBO’s True Blood.

It’s a colorful expression that’s part of Capps informative, insightful, at times humorous, and, yes, often irreverent response to Washington, D.C.’s Archbishop Donald Wuerl’s recent op-ed in the Washington Post concerning the current showdown between the Archdiocese and the D.C. Council over civil rights for gay people. Capps also comments on the “Manhattan Declaration” and aliens – gay ones at that!

Following is Capps’ commentary in its entirety. Enjoy!

The Catholic Church is shaking things up these days, huh? The same Church that silenced Galileo Galilei has acknowledged that aliens could maybe exist. Further, the Church says that xenomorphs might not require redemption through the blood of Jesus Christ. The Catholic Church is only talking astrobiology in theoretical terms right now, but what’s preventing the Vatican from launching its own national space program? Could we see, you know, a mission to Mars?

So alien beings on distant planets who have known neither Christ nor original sin and maybe have acid for blood are A-OK with the Church. Teh gay, however, is not. Archbishop Donald Wuerl – who is not so much a popular guy in the gay ol’ District these days, following the Archdiocese’s controversial threat to rescind its social-work contracts should the D.C. Council legalize gay marriage – takes to the Washington Post today with a column to explain the Church’s view. Writes Wuerl:

While we do not agree with the council on redefining marriage, we recognize that it is firmly committed to opening marriage to homosexual couples. We are asking that new language be developed that more fairly balances different interests -- those of the city to redefine marriage and those of faith groups so that they can continue to provide services without compromising their deeply held religious teachings and beliefs. The archdiocese has not been alone in requesting broader language. Other groups, including the American Civil Liberties Union, the InterFaith Conference of Metropolitan Washington and nationally recognized legal scholars all called for stronger protections for religious freedom in their testimony on the original bill.

It is uncomfortably tempting to make a pun when an Archbishop makes a bad-faith argument.

What the ACLU actually said is that the wording should be clarified to guarantee that churches are not required to perform or host same-sex marriages – which is entirely consistent with the intent of the legislation. City officials are willing to work to make sure this is clear, so long as religious organizations agree to treat their homosexual employees the same way they treat their heterosexual employees.

More in sadness than in anger, Archbishop Wuerl writes, the legislation “would reduce unnecessarily the resources available for outreach.” The Archbishop expresses “a simple recognition that the new requirements by the city for religious organizations to recognize same-sex marriages in their policies could restrict our ability to provide the same level of services as we do now.” For an explanation as to how these policies would restrict the Archdiocese, Wuerl writes, “Since Catholic Charities cannot comply with city mandates to recognize and promote same-sex marriages, the city would withhold contracts and licenses.” It would be the District turning down the Church!

What Wuerl doesn’t mention is employee benefits – the actual crux of the Archdiocese’s displeasure with the legislation. The Archbishop writes, “We are asking that new language be developed that more fairly balances different interests – those of the city to redefine marriage and those of faith groups so that they can continue to provide services without compromising their deeply held religious teachings and beliefs.” It is apparently a deeply held religious teaching and belief that same-sex partners of employees of the Catholic Church not receive benefits.

What Wuerl also doesn’t mention is that the Archdiocese’s judgment is consistent with the Manhattan Declaration, an ecumenical agreement between conservative Christian leaders to rally in their opposition to abortion and teh gay. Wuerl was the first to sign the document, which calls for Christians to practice civil disobedience to protest liberal social laws. Render unto Caesar, bitches!

Of course, what Wuerl doesn’t need to say is why he is writing an editorial instead of, say, a letter. Congresswoman Eleanor Holmes Norton has said that she hopes to find a solution that does not involve intervention by her peers in Congress – which is probably conservatives’ last best hope for preventing the legalization of same-sex marriage in the District. And D.C. Council members David A. Catania and Phil Mendelson have sent Wuerl letters noting a compromise policy practiced at Georgetown University. Wuerl doesn’t mention any specific change to the legislation that his editorial would seem to call for (“We are asking that new language be developed”). But hey, the Washington Post sure is read by a lot of people in Congress who could do something about it.

What Wuerl also also doesn’t mention is teh gay aliens. What happens if the Church finds extraterrestrials and they are totally gay?

Levine’s commentary is entitled, incidentally, “A Publicly Funded Charity Should Serve the Public,” which, when you think about it, could be a politer way of expressing Capps’ whole “rendering unto Caesar” thing!