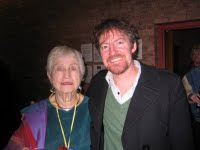 Earlier this evening in Minneapolis I joined with over 200 others in celebrating the 90th birthday of Polly Mann.

Polly is a longtime justice and peace activist and co-founder of Women Against Military Madness (WAMM) – a non-profit organization dedicated to dismantling systems of militarism and global oppression, and one of the most active and influential justice and peace groups in the Midwest. She’s been described as a “relentless speaker of truth to power.”

Polly’s also a very dear friend of mine and a great inspiration in my own efforts in making a positive difference in both the church and the world. Thank you, Polly. . . and happy birthday! 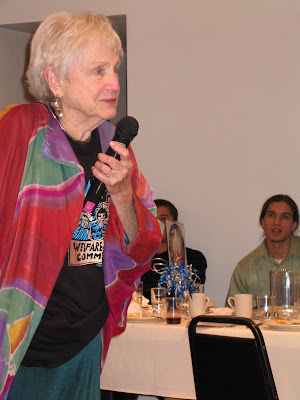 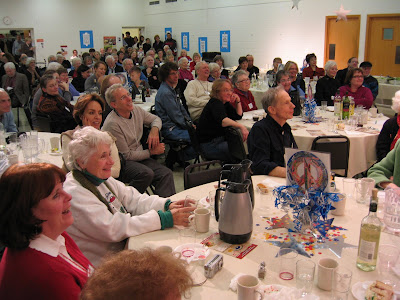 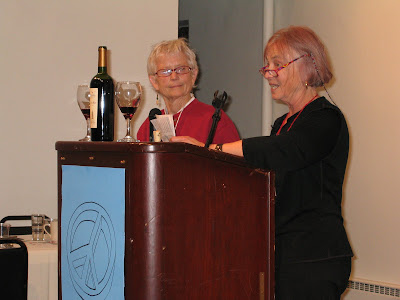 Above: Pat and Sarah - toasting (and roasting) Polly. 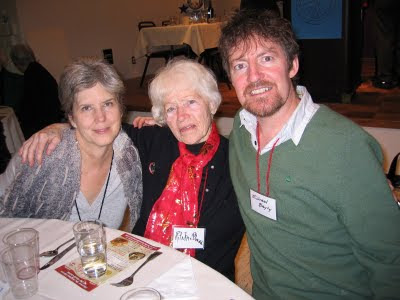 Above: With my friends (from left) Mary and Rita. 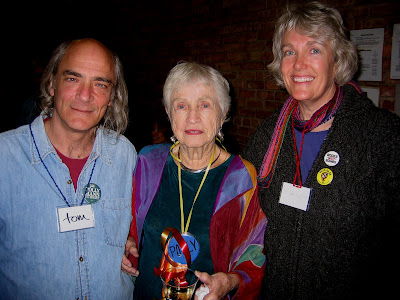 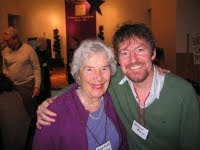 Above: Polly with Tom and Pepperwolf. Tom maintains the informative website CircleVision.org.

As I note on my Faces of Resistance website, “Marianne’s activism began after World War II when she became president of the Minnesota chapter of the World Federalists. Her activism continued through the Vietnam War era, when she was an outspoken critic of the conflict. In the 1970s she was invited to the Paris Peace Talks as part of an antiwar delegation. In 1982, Marianne joined with Polly Mann and others to form WAMM. Marianne is particularly well known for her international activism, and received the 1999 International Citizen Award, granted jointly by Hennepin County, Ramsey County, and the cities of Minneapolis and St. Paul.”

Like Polly, Marianne is a real inspiration to me. She’s positive and proactive and “makes the connections,” as we like to say in the progressive community. For instance, in 2002 Marianne observed that: “More and more people are now saying that social, military, and globalization issues are all one . . . My upbringing in Catholic schools taught me about the interconnectedness of humanity – that we can’t separate one from another. That’s my personal motivation. And it seems to motivate a lot of people.” 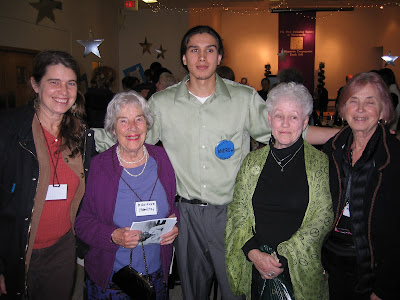 
The following images and commentary are excerpted from my website Faces of Resistance: Images and Stories of Progressive Activism at the Turn of the Millennium (1997-2006).

“For many years I thought militarism itself was responsible for war,” noted Polly in October 1999. “But slowly, very slowly, I have come to realize that militarism is itself not responsible for war. It is the mechanism, the servant, of a larger force - a force that is the dominant religion of American society. This religion is touted in every possible way. Half of Sunday’s newspaper is devoted to it . . . It’s most obvious churches are the shopping malls. This force, this god, goes by many names – the most obvious is money. Another is consumerism . . . Another term often applied is the American lifestyle – a term which implies the ability to buy anything you have the money or the credit card capital for. The doctrines of this religion go by many names: ‘free trade,’ meaning unrestricted trade, ‘the market economy,’ and ‘corporate globalization.’”

In April 1999 I invited Polly to speak to a class I was teaching at the College of St. Catherine-Minneapolis, entitled Spirituality and Social Justice. Following are some of the students’ responses to Polly’s presentation:

“War is something Polly is familiar with. She is originally from Arkansas where she worked in an Army camp [during World War II]. She expressed sadness while telling us about the activities of the camp. She said it was very emotional to see the trains leave with the soldiers. They had to say goodbye to their loved ones. She said the worst [part] was when they returned home. Many [of the soldiers] were dead and the rest wounded. It did not seem to matter that they were heroes. [Polly] also told of the fighting techniques the men were taught. Bayonet practice was hard for her to watch because of its brutality. During this time she decided that she would speak out against war, but living in a small town [made it] difficult.”

“[In questioning and challenging militarism] Polly has had some negative experiences. She has been arrested because of protesting and [has been] put into jail. The WAMM office has received hate mail and threats. The positive side is how [her activism] effects the people around her. Personally, I think seeing her stand up makes me think I can do something like that with an issue I strongly believe in.”

“Polly was a wonderful speaker and I really admire her . . . I left class feeling very uplifted and charged. She has inspired me to speak out against topics like war and to fight for what is right. I have always wondered what difference will it make if I argue for this or that? I am only one person and nobody will listen to me. Polly proved to me that I am not the only one out there. All it takes is for one person to start the ball rolling.”

“At times it is hard for me to hold my head high and be proud to be an American. It’s hard to know that I’m the bully; I’m the biggest polluter of the world; I’m starving the children in [Iraq and] Third World countries; I’m covering up the military’s scandals. I’m doing all of these things because I’m not speaking out against them. My silence is my support, and it is wrong.”

Left: “I feel bad, but I’m not angry,” says Polly Mann of the events of 9/11. “I’m saddened, but I’m not angry because I understand that there’s a background to all of this. And also, I think of the 5,000 children who die every month in Iraq and I don’t see two inches in the newspaper about that. So, until every death is the same as a death of ours, we’re going to have trouble. Until we feel the equal pain for their loved ones that we do for the loved ones of Americans, we’re in trouble and we’re going to stay in trouble.”

Reflecting on the Bush administration’s war rhetoric and the strong support it seemingly has from the American people, Polly notes, “America is not a peace-loving country. It is a country filled with people who love their things more than they love their children. Our wealth has done us in.”

Thanks for sharing this Michael. Polly sounds like an amazing woman. As someone from a somewhat military family, this gives me a different perspective. My grandfather was a Colonel, retired as General, in World War II. My father, his brother and 5 of my mother's brothers also served in World War II. My brother served in Vietnam. I was the different one though, I wouldn't even play with a toy gun, not even a water pistol when I was a kid. So I suppose I was the family peacenik. I had a poster of a peace sign in my bedroom when I was a teen. Give Peace a Chance.

I appreciate and enjoy it when you share your always interesting anecdotes. Thanks for that!

Polly said (above):"militarism is itself not responsible for war. It is the mechanism, the servant, of a larger force - a force that is the dominant religion of American society...money". She's right, we worship Moloch, and get his terrible gifts: Deaths of innocent women, children, and American soldiers; pollution, waste of resources, hatred of its victims, torture, and ruin. Stop this blasPhemy, NOW!
James W. Gould