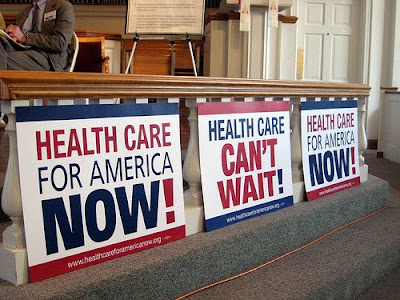 Catholic Democrats describes itself as an “association of state based groups representing a Catholic voice within the Democratic Party, and advancing a public understanding of the rich tradition of Catholic Social Teaching and its potential to help solve the broad range of problems confronting all Americans.”

Earlier today, the association released the following media release in response to yesterday’s passage in the U.S. House of Representative of the Affordable Health Care for America Act (H.R. 3962).

Boston, MA - Catholic Democrats applauds the passage of the Affordable Health Care for America Act (H.R. 3962) which passed the U.S. House of Representatives last night by a vote of 220 to 215. We congratulate and thank Speaker of the House Nancy Pelosi (D-CA) for her leadership in passing this historic legislation which will expand health care coverage to an additional 30 million people (covering an estimated 96% of all Americans), prevent insurance companies from denying health insurance for pre-existing conditions, and provide for a public option to compete with private insurance plan.

“This is a day for celebration among Catholics and all Americans who believe that life’s greatest test is how deeply we care for one another,” said Dr Patrick Whelan, president of Catholic Democrats.

“We urge the Catholic members of Congress who have not supported the passage of this bill to follow the courageous example set by Representative Joseph Cao (R-LA), a Catholic and former Jesuit seminarian, and support this landmark legislation now. This reform represents progress in helping our nation to realize the Gospel imperative of making health and healing available to all Americans.”

The Catholic Church has been at the forefront of advocating for health care as a right for decades, including pastoral letters issued by the U.S. Conference of Catholic Bishops (USCCB) in 1981 and 1993. Passage of an amendment by Bart Stupak (D-MI) resolved the abortion issue to the bishops’ satisfaction so they can now support legislation that will bring the nation closer to universal coverage, especially for poor people and immigrants.

“Now that suitable language addressing abortion funding has been agreed to in the House bill, it opens the way for all Catholics - Democrats, Republicans and Independents - to support the provisions of this bill, which are in accordance with Catholic Social Teaching,” said Steve Krueger, national director of Catholic Democrats. “Catholics have an innate understanding of the role universal health care coverage will play in promoting the common good. Now is the time to build on the success of the House bill and pass legislation that codifies our belief that health care is a fundamental human right.”

This was indeed glorious news and a day rich in austerity and history for our great nation! Now, perhaps we can put an end to the incindiery rhetoric from our pulpits denouncing healthcare reform because of it's, alleged, support of abortion. Here's hoping the Bishops will support the President and stop lambasting him. Pope Benedict no doubt supports this effort!