Maine Vote on Gay Marriage Too Close to Call 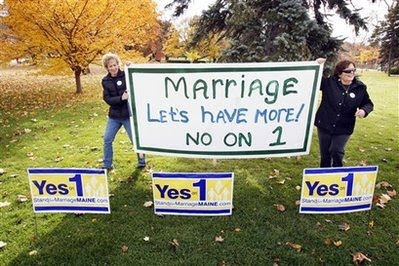 The Associated Press is reporting this evening that the gay-marriage vote in Maine is too close to call.

As I’m sure most readers of this blog would know, the issue of gay marriage was put to a vote in Maine today in a closely watched referendum that many of us hope will see marriage equality prevail at the ballot box.

Following are highlights from Glenn Adams and David Crary’s AP article on this unfolding story. It’s an article that does an excellent job at succinctly summarizing the significance of today’s vote - however it turns out. 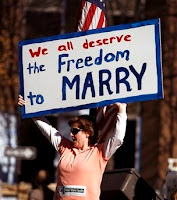 Voters [in Maine] had to decide whether to repeal or affirm a state law that would allow gay couples to wed. The law was passed by the Legislature in May but never took effect because of a petition drive by conservatives.

Early returns showed a close contest, as forecast. With 148 of 608 precincts reporting, each side had 50 percent of the votes.

A vote to uphold the law would mark the first time that the electorate in any state endorsed gay marriage. That could energize activists nationwide and blunt conservative claims that same-sex marriage is being foisted on states by judges or lawmakers over the will of the public.

However, repeal — in New England, the region of the country most supportive of gay couples — would be another heartbreaking defeat for the marriage-equality movement, following the vote against gay marriage in California a year ago.

It would also mark the first time voters had torpedoed a gay-marriage law enacted by a legislature. When Californians rejected same-sex marriage, it was in response to a court ruling, not legislation.

Maine’s secretary of state, Matthew Dunlap, said turnout seemed higher than expected for an off-year election and voter interest appeared intense. Even before Tuesday, more than 100,000 people — out of about 1 million registered voters — had voted by absentee ballot or early voting.

Five other states have legalized gay marriage — Iowa, Massachusetts, Vermont, New Hampshire and Connecticut — but all did so through legislation or court rulings, not by popular vote. In contrast, constitutional amendments banning gay marriage have been approved in all 30 states where they have been on the ballot.

“If we don’t win, then Maine will have its place in infamy because no state has ever voted for homosexual marriage,” said Chuck Schott of Portland, who stood near a polling place in Maine’s biggest city with a pro-repeal campaign sign.

Another Portland resident, Sarah Holman said she was “very torn” but decided — despite her conservative upbringing — to vote in favor of letting gays marry.

“They love and they have the right to love. And we can’t tell somebody how to love,” said Holman, 26.

Hundreds of gay-marriage supporters gathered in a Portland hotel ballroom in the evening to await the results. On display was a three-tiered wedding cake topped with two grooms on one side, two brides on the other, and the words “We All Do.” 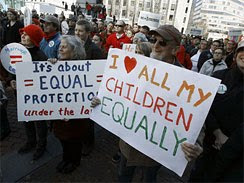 See also the previous Wild Reed posts:
Patrick Ryan on the “Defense of Traditional Marriage” Argument
John Corvino on the “Always and Everywhere” Argument
The Changing Face of “Traditional Marriage”
Scandalous News from Maine
The Same Premise
Is Anyone In the Least Bit Surprised By This?
The Real Gay Agenda
Separate is Not Equal
An Ironic Truth
A Catholic Voice for Marriage Equality at the State Capitol
A Surprising Finding Regarding Catholics and Gay Marriage
A Catholic Presence at Gay Pride

Image 1: Supporters of same-sex marriage Suzanne Blackburn, left, and Ann DiMella, of Portland, prepare to set up a “NO on 1” sign in Deering Oaks Park, Tuesday, Nov. 3, 2009, in Portland, Maine. Voters will decide Question 1, the proposal to rescind the Legislature’s approval of same-sex marriage. (AP Photo/Robert F. Bukaty)

Image 2: Kathy Stickel holds a sign while joining supporters who turned out for a gay-rights supporter rally the day before election day in Portland, Maine, on Monday, Nov. 2, 2009. Gay marriage has lost in every single state in which it has been put to a popular vote. Come Election Day, gay-rights supporters are hoping to make Maine the exception. (AP Photo/Pat Wellenbach)

Image 3: Supporters turn out for a gay-rights rally the day before election day in Portland, Maine, on Monday, Nov. 2, 2009. (AP Photo/Pat Wellenbach)